Meghan Markle appeared on “The Ellen DeGeneres Show” Thursday to promote her children’s book “The Bench,” advocate for federal paid family leave in the United States and donate money to a charitable cause.

While on the daytime talk show, Markle also participated in a prank in which she was listening to DeGeneres through a hidden earpiece and had to do whatever the Emmy-winner told her to do.

“When Meghan and I were talking about her doing the show, the first thing you said to me was, ‘I want to do one of those IFBs,” DeGeneres told the audience.

“I sent Meghan out to do some shopping. She wore an earpiece and had to say and do everything I told her to do,” she added.

In the skit, the Duchess of Sussex visited some vendors on Warner Bros. lot, where “Ellen” is taped, and performed strange acts like doing a squat for no reason, touching a crystal to her head and chanting, drinking milk out of a baby bottle, eating like a chipmunk and singing a fake children’s song while wearing animal ears.

The unsuspecting vendor owners were selling cookies, crystals and hot sauce. They were told by Markle’s fake assistant (planted by DeGeneres) to treat the duchess “normally,” so they didn’t question her odd behavior.

After a few minutes, DeGeneres drove up on a golf cart and told the vendors it was a prank.

Many people complimented her comedy chops while others thought it wasn’t very royal-esque to be on national TV acting silly.

“Comedy gold. I laughed so loud,” wrote one person about the prank video.

“I love how Meghan isn’t afraid to make fun of herself,” said another. 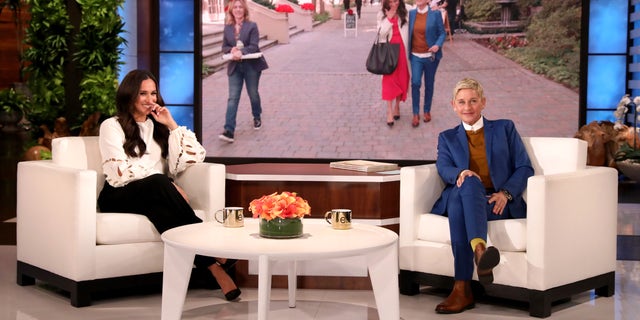 “The fact that Meghan agreed to do this just highlights how cool, down to earth and amazing she really is,” penned someone else.

While others said, “PR on overdrive.”

“I thought they [don’t] want to be called by their royal names anymore…” reasoned someone else.

“I do not understand, she was looking for her ‘privacy’ and now she is everywhere making interviews and exposing her life,” a user pointed out.

Markle also spoke to DeGeneres about using her voice and platform to fight for paid family leave in the U.S. 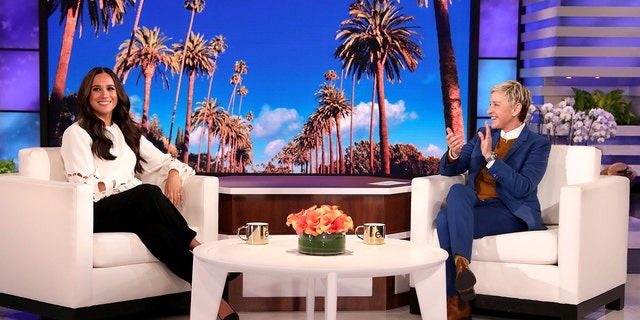 Markle spoke about her children’s book and paid family leave while on the daytime talk show.
(Michael Rozman/Warner Bros.)

“Everybody knows, especially if you have had a child and even if you haven’t, you know how hard it is and how critical it is in those first few weeks if not months to be together as a family,” she added.

“And the fact that we don’t offer that here is something that now as a mom of two, I will do everything that I can to make sure that we can implement that for people.”

The British royal family member said recently during an appearance at the New York Times DealBook summit while speaking to Andrew Ross Sorkin, “I don’t see this as a political issue, frankly. There is a precedent among my husband’s family, the royal family, of not having any involvement in politics. From my standpoint, this is a humanitarian issue.”

Finally, Markle and DeGeneres highlighted Brittany Starks, a Tennessee mother and hairdresser who gave back after being helped herself through hard times by braiding the hair of schoolchildren for free. Since, she has started a charity, A Twist of Greatness.

The show and philanthropy partner TisBest donated $20,000 to her cause. Markle and Harry matched it with another $20,000 through their Archewell foundation.

“We were so touched by your story,” Markle told Starks, giving her a hug.