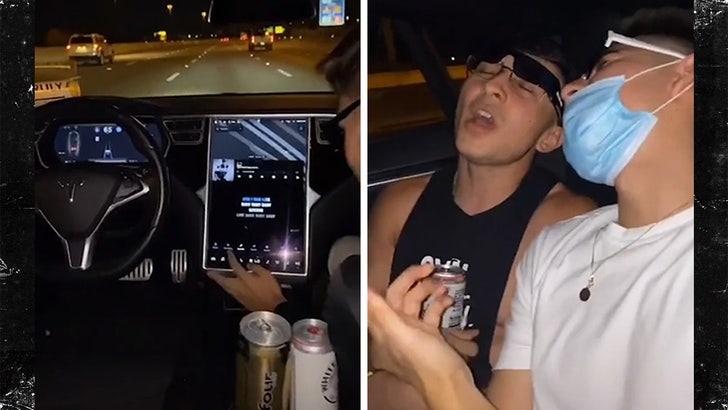 Drinking and driving is stupid, but so is drinking and letting your car do the driving for you … as these morons demonstrate.

This video shows them flying down the highway while utilizing Tesla Autopilot … with nobody in the driver’s seat. As they sing and travel at apparent speeds of 60 mph with nobody behind the wheel, cans of various types of alcoholic beverages — White Claw, Truly, Four Loko, Natty Light Seltzer — all over the car and in the hands of some passengers.

It’s not like they’re trying to hide this dangerous stunt, either … ’cause they posted the vid on TikTok. Now, to answer the obvious question — NO, Tesla Autopilot is NOT intended to be your designated driver!!

In fact, at least 4 people have died in Tesla Autopilot-related crashes. In March 2019, a Florida man was killed when his Model 3 crashed into a tractor trailer crossing its path. The crash was eerily similar to the first publicly reported Autopilot death in May 2016 … when a Tesla was unable to recognize a semitruck crossing its path.

Though Tesla CEO Elon Musk wants his self-driving cars to be fully autonomous … the Autopilot feature still requires drivers, IN the driver’s seat, to be attentive and ready to take control of the car.

american idol alum haley reinh
You may also like:

The Israeli And Palestinian Conflict – And ME! Plus, My Mom Cancelled Her Trip! My Son's New Obsession! And… | Perez Hilton