Exceptionally rare Albert Einstein letter in which he wrote down his famous ‘E = mc²’ formula has been sold for a whopping $1.2 million at auction

A letter penned by Albert Einstein in which he wrote down his famous ‘E = mc²’ mass–energy equivalence formula has sold at auction for the princely sum of $1.2 million after a furious bidding war.

Boston-based RR Auctions, which handled the sale, said it was more than three times what was expected for the rare letter, which went on sale earlier this month.

‘It’s an important letter from both a holographic and a physics point of view,’ Bobby Livingston, executive vice president at RR Auction said in an interview with the Associated Press.

Initially, there were five bidders for the rare item, but once the price of the item topped $700,000, just two bidders remained.

RR Auctions said the buyer of the Einstein letter has preferred to remain anonymous.

There are four known examples of the famous equation written in Einstein’s own handwriting, but this was the only one in a private collection.

It was held by the descendants of the man who received the Oct. 26, 1946 letter, Polish-American physicist Ludwik Silberstein. 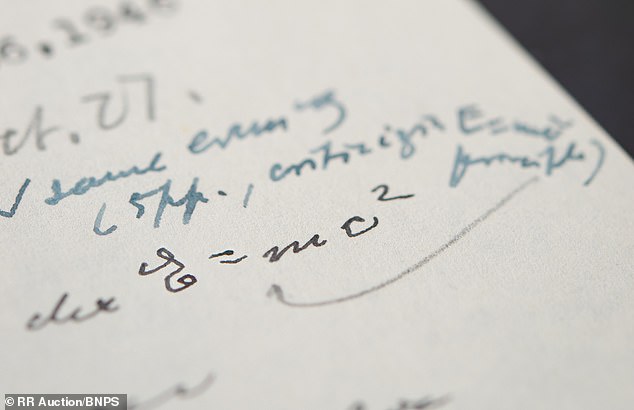 A letter penned by Albert Einstein which is rare for containing his famous ‘E = mc²’ mass–energy equivalence formula (pictured) sold at auction for $1.2 million, more than three times what was expected

E = mc² — the mass–energy equivalence formula — details the relationship between mass and energy of a system at rest.

It describes the energy (E) of a particle as a product of its mass (m) and the square of the speed of light (c).

The speed of light is an enormous number in everyday units, being 299 792 458 metres per second.

Given this, the formula shows how a small amount of mass at rest is equal to a massive amount of energy.

This accounts, for example, for the phenomenal amounts of energy that can be released by nuclear reactions, which convert tiny amounts of mass into energy.

E = mc² was derived by Albert Einstein as a result of his work on special relativity.

This explained how space and time are linked for non-accelerating objects.

The German-born Einstein corresponded with Silberstein, telling him a question could ‘be answered from the E = mc² formula.’

‘Your question can be answered from the E = mc2 formula, without any erudition,’ Einstein wrote in the letter written on Princeton University letterhead.

‘If E is the energy of your system consisting of the two masses, E₀ the energy of the masses when they approach infinite distance, then the system’s mass defect is E₀ – E / c2,’ he continued.

Silberstein was a well-known critic and challenger to some of Einstein’s theories.

Following a more complex answer, Einstein went on to conclude that ‘one must first a theory that contains the correct unification of gravitation and electricity.’

The auction started on May 13 and finished on May 20.

The search for this ‘unified field theory’ would go on to consume the final third of the extraordinary physicist’s life.

Special relativity – which involves the relationship between space and time – determined that the laws of physics are the same for all non-accelerating observers and that light’s speed in a vacuum is fixed, regardless of observer or source motion.

To this understanding Einstein later succeeded in factoring in acceleration and he published this in 1915 as his theory of general relativity, which explained that objects with mass distort the fabric of space and time, which we experience as gravity.

Dr. Silberstein cast doubt on general relativity in 1935–36 — even claiming in the press that the theory was ‘flawed’ — after developing a solution to Einstein’s field equations that he (erroneously) thought violated our understanding of gravity.

(The field equations are those that Einstein drew up to relate the geometry of spacetime to the distribution of matter within it — and thereby are what describe gravity as being a result the curvature of spacetime by mass and energy.)

However, by the time of Einstein’s correspondence in 1946, Dr Silberstein had reportedly come around to Einstein’s way of thinking. 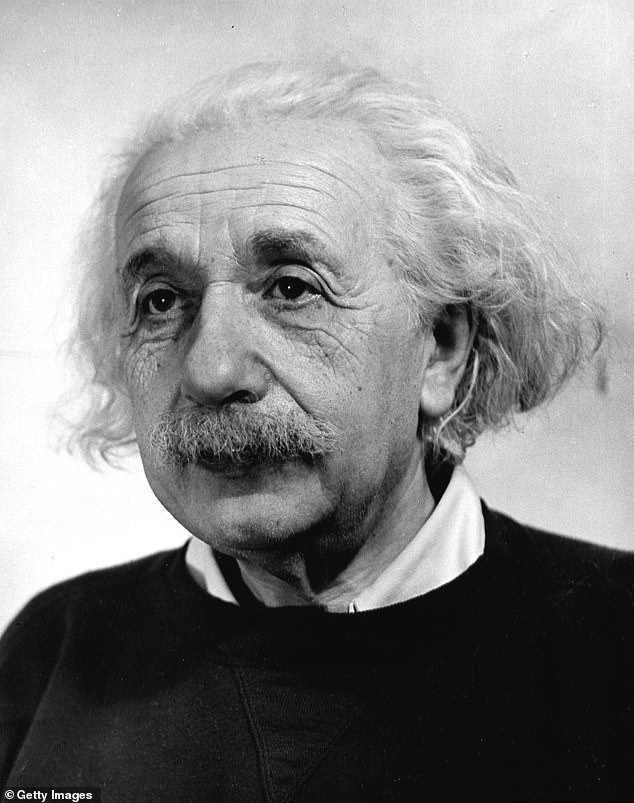 Einstein sent a letter to Polish-American physicist Ludwik Silberstein in October 1946, telling him a question could ‘be answered from the E = mc² formula’ 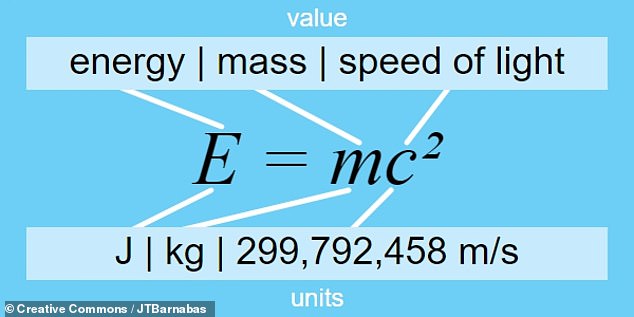 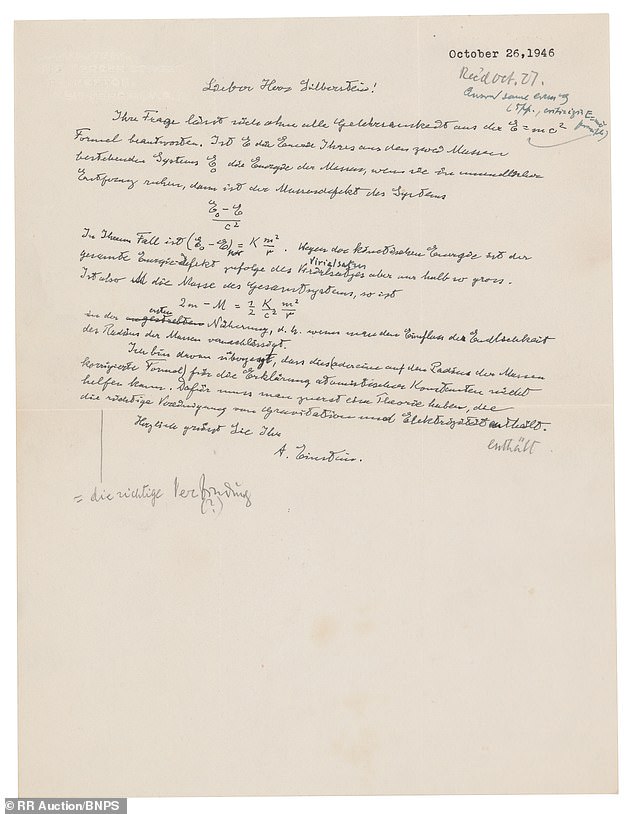 ‘It’s an important letter from both a holographic and a physics point of view, as it shows Einstein’s thinking on one of the most basic of all physical problems,’ said RR Auction’s executive vice president, Bobby Livingston

In fact, the Polish-American researcher is best known today for his work in introducing both Einstein’s general and special relativity into university courses.

The letter he received from Einstein has been put up for auction now by Dr Silberstein’s great-great-grandchildren.

‘It’s an important letter from both a holographic and a physics point of view, as it shows Einstein’s thinking on one of the most basic of all physical problems,’ said RR Auction’s executive vice president, Bobby Livingston.

‘Furthermore, the equation E is equal to m c-squared, in which energy is put equal to mass multiplied by the velocity of light squared, showed that a very small amount of mass may be converted into a very large amount of energy, and vice versa.’

In 2018, another piece of Einstein’s correspondence — the ‘God letter’ in which he called religion in general, and especially Judaism, a ‘childish superstition’ born of ‘human weakness’ — sold at auction in New York for $3 million (£2.1 million).

In 1905, Albert Einstein determined that the laws of physics are the same for all non-accelerating observers, and that the speed of light in a vacuum was independent of the motion of all observers

This is known as the theory of special relativity.

This ground-breaking work introduced a new framework for all of physics, and proposed new concepts of space and time.

Einstein then spent 10 years trying to include acceleration in the theory, finally publishing his theory of general relativity in 1915.

This determined that massive objects cause a distortion in space-time, which is felt as gravity.

At its simplest, it can be thought of as a giant rubber sheet with a bowling ball in the centre.

As the ball warps the sheet, a planet bends the fabric of space-time, creating the force that we feel as gravity.

Any object that comes near to the body falls towards it because of the effect.

Einstein predicted that if two massive bodies came together it would create such a huge ripple in space time that it should be detectable on Earth.

It was most recently demonstrated in the hit film film Interstellar.

In a segment that saw the crew visit a planet which fell within the gravitational grasp of a huge black hole, the event caused time to slow down massively.

Crew members on the planet barely aged while those on the ship were decades older on their return.

a, Albert, einstein, letter, With
You may also like: