Ancient Romans’ answer to Roadchef? Archaeologists uncover a 2,000-year-old roadside ‘service station’ in Hertfordshire along with hundreds of Roman artefacts and dozens of bodies

The Ancient Roman equivalent of a roadside service station has been unearthed in Hertfordshire, along with a hoard of artefacts showing it was once a thriving commercial centre.

The ‘once in a lifetime discovery’ was made on the site of a planned football pitch at Grange Paddocks leisure centre in Bishop’s Stortford.

Like a modern motorway service station, the site comprised several units and would have had everything the weary ancient traveller needed.

This may have included an inn providing refreshments, a blacksmith, and a temple to cater for travellers’ religious needs, according to archaeologists.

‘It’s quite like a services,’ said project manager Andrew Greef, from Oxford Archaeology, which has been excavating the site.

‘You’d have been able to stop. Everything would have been available for you at the roadside.’ 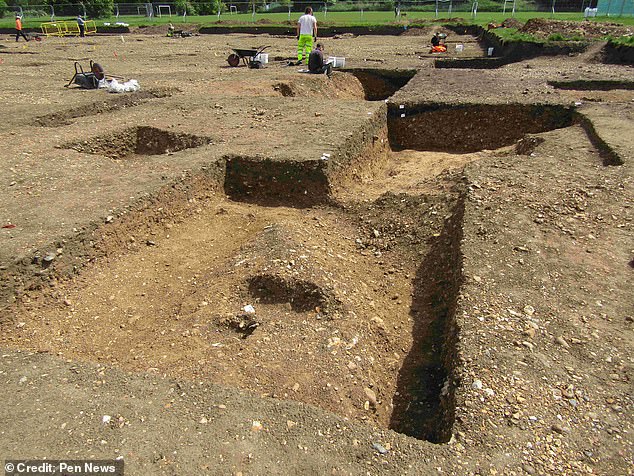 The Ancient Roman equivalent of a roadside service station has been unearthed in Hertfordshire. Pictured: the excavated cellars of former buildings 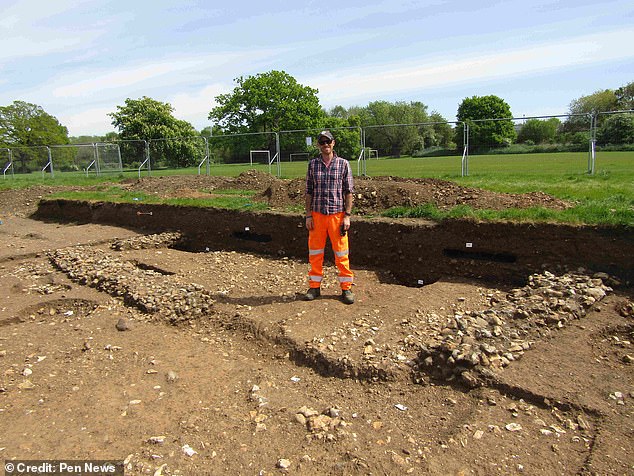 The site comprised several units, thought to include an inn, a blacksmith, and an ancient temple. Pictured: the foundations of the temple with archaeologist Neal Mason 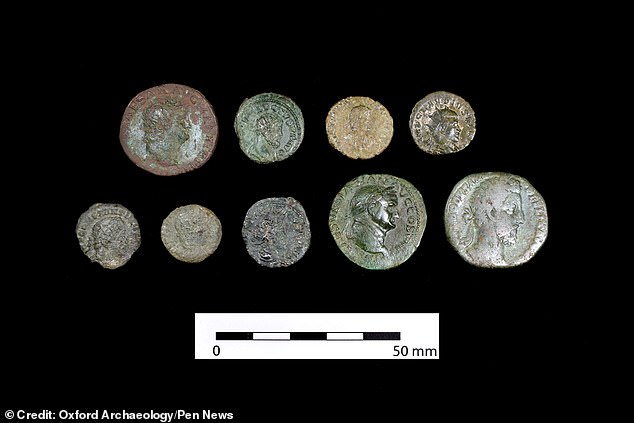 Artefacts discovered at the site include Roman coins dating back to the reign of Nero, as well as metal items, weighing scales, and pots for transporting goods.

Archaeologists working on HS2 have shed light on how an Iron Age village in Northamptonshire was transformed into a wealthy Roman trading town bustling with traffic almost 2,000 years ago.

Stunning discoveries made during a dig of the site near the village of Chipping Warden include cremation urns, gaming pieces, shackles, a snake-head brooch and more than 300 Roman coins.

Evidence suggests the settlement was established in about 400 BC when it was made up of more than 30 roundhouses, but that it greatly expanded during the Roman era around 300-400 AD, with new stone buildings and roads.

Artefacts discovered at the site include Roman coins dating back to the reign of Nero, as well as metal items, weighing scales, and pots for transporting goods.

‘We’re getting a lot of evidence for trade and commerce going on on-site,’ said Mr Greef.

‘I think you’re looking at some kind of stopover point or something associated with supply and trade, rather than just your average settlement.’

The intact road itself has been unearthed too, while a series of cellars has been excavated coming right up to its edge.

The location of the first-century settlement means it would have been ideally-placed to benefit from passing trade.

‘So we’re on a major Roman route, Stane Street, and it’s just about a good day’s march from St Albans.

‘It’s also at a river crossing, which is a strategic location, and they would have been utilising the River Stort for transporting goods and materials, so you’re essentially at a crossroads.’

The discovery of oyster shells in one ditch reveals not only the tastes of the site’s ancient visitors, but also its trade links with the coast dozens of miles away. 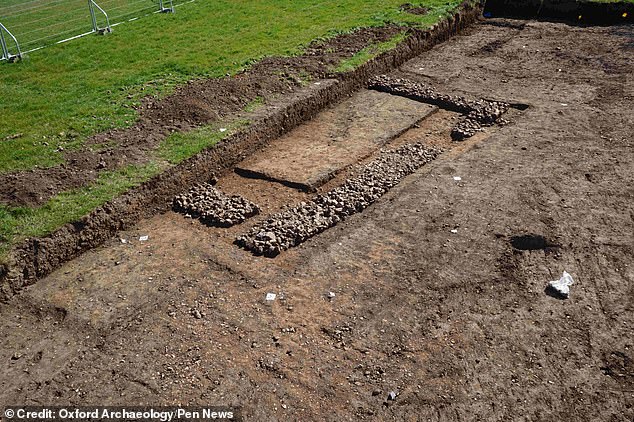 Like a modern motorway service station, the site would have had everything the weary ancient traveller needed. Pictured: the foundations of an ancient temple or shrine 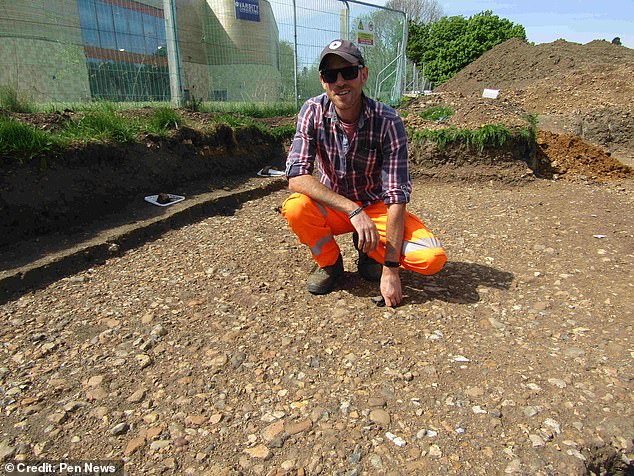 The intact road itself has also been unearthed. Photo shows the road surface of ancient Stane Street with archaeologist Neal Mason 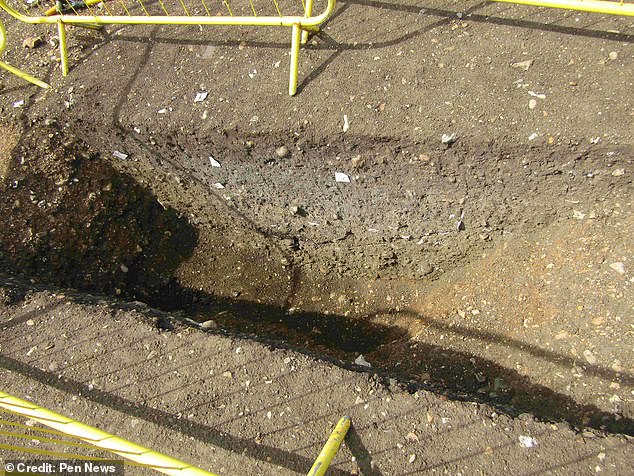 The discovery of oyster shells in one ditch reveals not only the tastes of the site’s ancient visitors, but also its trade links with the coast dozens of miles away 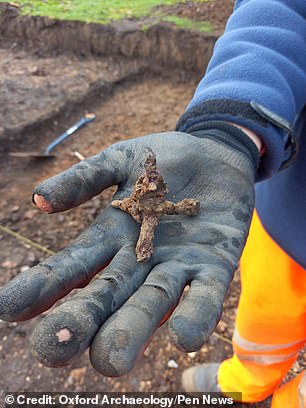 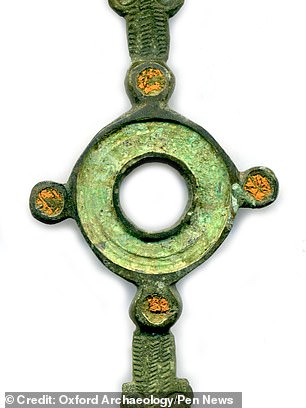 There’s some evidence of a military presence, including spearheads and a caltrop (pictured) – a metal device designed to always have a spike pointing upwards that’s been called the ‘Roman landmine’. Metal items including a brooch were also found at the site

While the site is thought to date back to the end of the first century, it also has an early Christian cemetery on its edge dating to the third or fourth century.

The burial ground comprises some 100 graves – roughly half of which had intact skeletons – each positioned east to west in the belief that the deceased would face Christ during the second coming.

In all, more than 500 small finds have been unearthed on the site.

‘For such a small area, the sheer quantity of archaeology and the amount of finds is more what you’d find in an urban centre like London really,’ said Mr Greef.

‘It’s definitely significant, you don’t get very many opportunities to excavate roadside settlements along the lines of major routes.

‘The usual reason is because they’ve become a later town. This one’s quite different in the way that the medieval settlement and crossing of the Stort are further south.

‘So these remains have been relatively undisturbed under paddocks – it’s possibly never been cultivated.

‘That’s what makes it unusual: the sheer wealth of material surviving and that it’s had very little later activity messing it around.’

Britons have suffered from worms since the Bronze Age, new research shows, with parasite infections peaking during the Roman and Late Medieval periods.

Things began to get better during the Industrial period, in part thanks to improvements in hygiene in parts of the UK, before the Victorian ‘Sanitary Revolution’ ushered in a nationwide reduction in infections.

Oxford researchers analysed ancient skeletons in an effort to establish the size and scale of parasitic worm infections in the UK over the course of history.

They hope that by understanding how parasitic worm infections changed in the past, it could help public health measures in regions of the world still experiencing problems today.

He suggested there was a possibility that the site was mainly populated by foreigners, pointing to the Saxon style of the cellars by way of example.

And he speculated that the residents could have been Roman veterans who had been gifted land after completing their years of service.

There’s some evidence of a military presence too, including spearheads and a caltrop – a metal device designed to always have a spike pointing upwards that’s been called the ‘Roman landmine’.

Mr Greef said: ‘One thing that’s really intriguing is the amount of military-related objects and getting to the bottom of how this relates to how the army would’ve been using the site,

‘So that’s something we’re going to be looking at further in the post-excavation process.’

Oxford Archaeology was commissioned to document the site by East Herts District Council (EHDC), which is planning to install a new 3G artificial sports pitch there.

However the Roman settlement appears to be bigger than the present excavations – with part of the temple or shrine beyond the footprint of the planned pitch.

Remains from the cemetery – which seems to date towards the end of the site’s occupation – will be cleaned, documented by an ossiologist, and ultimately stored in Bishop’s Stortford Museum.

Remains from an earlier cremation have also been found at the site, as well as substantial numbers of animal bones, indicating that livestock was kept there.

Councillor Eric Buckmaster from EHDC said: ‘This excavation reminds us all that we are not the first to tread this land.’ 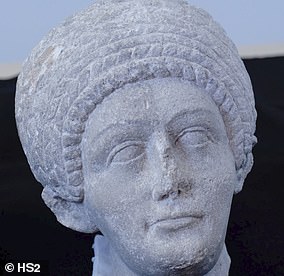 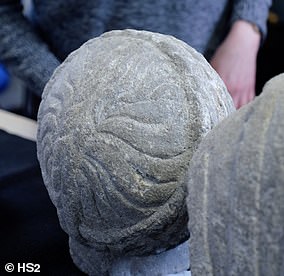 Three Ancient Roman busts that were found under the site of a Norman church in Stoke Mandeville, Buckinghamshire, are being cleaned up to reveal their delicate facial features.

Archaeologists for the HS2 railway uncovered the three stone busts beneath the ruins of the old St Mary’s church, which was demolished in 1966 for being unsafe.

Two of the figures are adults — a man and a woman, both of which have had their head split from their body — while the third is the head alone of a child.

Archaeologists have now cleaned the female carved head, revealing intricate details on the sculpture such as tear ducts and the curvature of the lips.

As the back of the head on the female statue was encrusted with a thick layer of soil when excavated, the cleaning process has also revealed how the hairstyle has been put together.

Bloke ridiculed as ‘creepy’ and ‘scary’ after spending £12.5K to become a dog