If you’re a construction worker, Boston Dynamics’ humanoid robot could soon be coming for your job.

Atlas was already able to run and jump, but the footage shows it can now also grip objects, making it an ideal companion on the building site.

In the new clip Atlas can be seen laying wood over scaffolding, holding and carrying a tool bag and performing an extravagant mid-air flip. 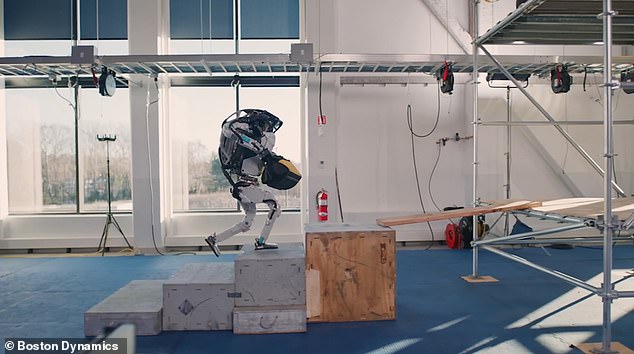 Atlas the most human-like robot in Boston Dynamic’s line-up, first unveiled to the public in July 2013.

According to the firm, Atlas is a ‘high mobility, humanoid robot designed to negotiate outdoor, rough terrain’.

It measures 1.5m (4.9ft) tall and weighs 75kg (11.8st). The humanoid walks on two legs, leaving its arms free to lift, carry, and manipulate objects in its environment.

Stereo vision, range sensing and other sensors allow Atlas to walk across rough terrain and keep its balance.

Atlas is designed to help emergency services in search and rescue operations. It can be used to shut-off valves, open doors and operate equipment in environments where human rescuers could not survive.

Boston Dynamics, which is based in Waltham, Massachusetts, said: ‘It’s time for Atlas to pick up a new set of skills and get hands on.

‘In this video, the humanoid robot manipulates the world around it – Atlas interacts with objects and modifies the course to reach its goal, pushing the limits of locomotion, sensing, and athleticism.’

One viewer commented on the YouTube video: ‘The way the robot walks makes it look super excited, so cute!!’

Another said: ‘Honestly it is a bit weird, but awesome, to watch a robot move around so fluidly.’

The robot’s new ‘hands’ consist of just two fingers – one fixed into place and the other adjustable, but the new footage shows this is enough to keep a firm grip on objects.

The clip shows it assisting a human construction worker at the top of a set of scaffolding in an indoor setting.

The human worker says ‘I forgot my tools again!’ and Atlas assists by building a makeshift bridge with a piece of wood before picking up the tool bag.

Atlas then crosses the bridge with the bag before throwing it to him and performing an ‘inverted 540-degree, multi-axis flip’ back onto the floor. 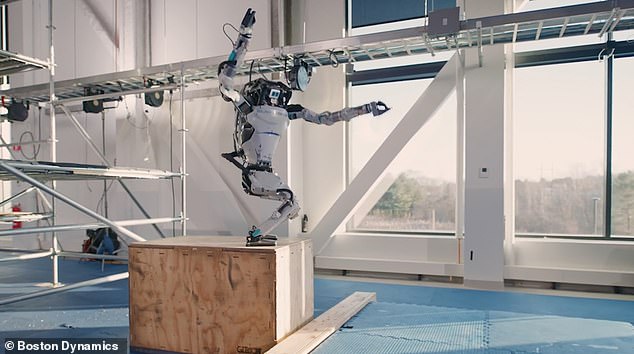 Atlas was already able to run and jump, but the footage shows it is also able to grip objects, making it an ideal companion for physical tasks 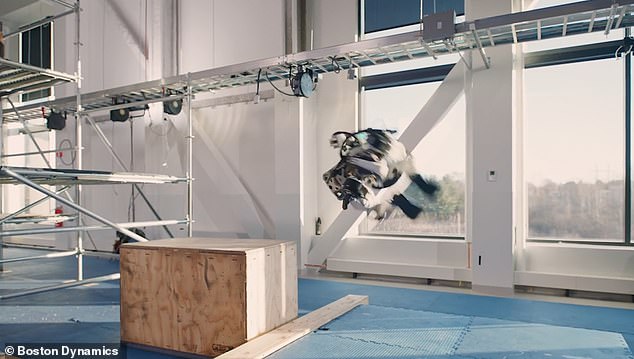 Boston Dynamics has shown Atlas is capable of:

– Backflips and other mid-air acrobatics

– Standing up after falling over

– Balancing on a narrow beam

– Cleaning, including vacuuming and sweeping

Atlas is not for sale, but rather it’s a ‘research platform designed to push the limits of whole-body mobility’, the company claims.

The bot’s capabilities have gradually been expanded since it was first unveiled, back in July 2013.

It is aimed specifically at helping emergency services in search and rescue operations.

The company has previously released videos showing Atlas’ eerily human-like movement, although in these it had spherical stubs instead of hands.

In one, Atlas takes on parkour, the athletic art that involves running, jumping and climbing while moving through various terrain.

Previous videos also show the bot jogging around a grassy field and leaping over logs, doing backflips and standing on one leg.

Atlas is also just one of the robots created by Boston Dynamics, which releases new videos of its creations in action to much fanfare. 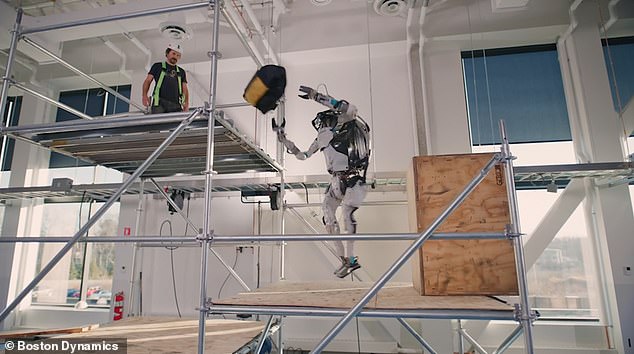 Before, Atlas had spherical stubs where hands would be. But now it has two fingers for gripping – one fixed into place and the other adjustable

Spot, which is suited for indoor or outdoor use, can map its environment, sense and avoid obstacles, climb stairs and open doors.

It can undertake hazardous tasks in a variety of inhospitable environments such as nuclear plants, offshore oil fields and construction sites.

Spot can be used for a range of heavy duty applications, including inspecting rocket launch test sites, as demonstrated by SpaceX.

It’s also being deployed in the French army, helping military school personnel to complete training scenarios, and in the New York Fire Department to aid search and rescue missions.

However, it often takes part in some fun Boston Dynamics promos; in the last couple of years multiple Spots were filmed performing a choreographed routine to songs by K-Pop band BTS.

In 2020, Spot joined Atlas and Handle, another Boston Dynamics robot, in a dance performance to the 1962 Motown classic ‘Do You Love Me’ by The Contours.

Spot, the quadruped robot has been developed by Boston Dynamics. The firm says all of its sales will be subject to terms and conditions that dictate the ‘beneficial use’ of its robots

Getting Spot to dance actually serves a purpose, according to the firm – it gives its mechanical design and algorithms in the software a bit of a workout.

But the firm has reassured that it will not support uses of Spot that ‘harm or intimidate’ people which includes banning the attachment of weapons.

In October it signed a letter pledging not to support efforts to ‘weaponize’ its products by some customers.

In October, Boston Dynamics pledged not to support the weaponization of its products and called for competitors to do the same.

In a letter, the firm said recent efforts to weaponize their robots – such as a Russian inventor who strapped a submachine gun to a Unitree robot and filmed it shooting targets – had added to the urgency of their declaration.

‘We pledge that we will not weaponize our advanced-mobility general-purpose robots or the software we develop that enables advanced robotics and we will not support others to do so,’ said the letter, which was signed by six other companies, including Unitree.

The Massachusetts-based tech company has frequently seen videos of its robot dogs Spot or its humanoid robot Atlas go viral for performing various stunts or athletic tasks in public.

They also pledged to review their customers’ planned use of any robots to avoid potential weaponization and to develop new technological features that could mitigate or reduce the risks.

The letter notes that any technology can be misused by bad actors who could then use it to encroach upon civil rights, threaten or harm the public, or far worse.