Follow
Home » Science » Fruit flies have sex even when they're ill, study finds

Fruit flies have sex even when they're ill, study finds

Fruit flies prioritise sex over survival: Insects continue to mate with each other even when infected with deadly pathogens, study finds

They’re best known for buzzing round in circles searching for bananas – but overripe fruit may only be one of the fruit fly’s primary interests.

Researchers at the University of Birmingham have found that the insects continue to have sex with each other even when infected with deadly pathogens.

Infected fruit flies continued to engage in courtship and mating, regardless of whether either the male or the female fly has been infected.

It had been thought that infections typically reduce the amount of energy available for activities like mating.

But diseased fruit flies may be no more put off from having sex than humans are when we’ve caught a cold. 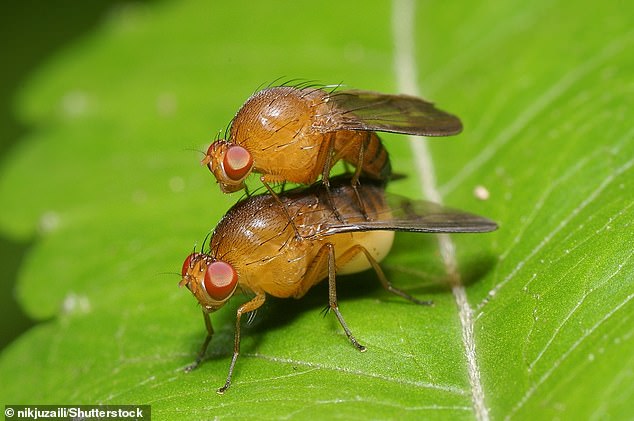 The study focused on Drosophila melanogaster, a species commonly referred to as the fruit fly, and sometimes the vinegar fly or pomace fly. Pictured are two mating in the wild. The researchers at the University of Birmingham performed experiments in the lab (file photo)

Although they’re best known for buzzing round in circles searching for bananas, scientists reveal fruit flies actually have an  impressive range.

The species, Drosophila melanogaster, can fly up to nine miles (15 km) in a single journey, researchers from California Institute of Technology (Caltech) reported.

Impressively, this is around 6 million times their average body length, which is just 2.5 millimetres.

This would be like the average human covering just over 6,200 miles in a single journey – roughly the distance from the North Pole to the equator.

Read more: Hungry fruit flies can fly up to nine miles in a single journey to find food

When faced with a potential life threat, some animals respond by investing more into reproduction, likely in attempt to pass on genes to the next generation.

This may well be what is happening with fruit flies in the conditions tested in the lab.

‘Animals have limited energy resources that need to be distributed among different activities, like fighting an infection or mating,’ said study author Dr Carolina Rezaval at the University of Birmingham.

‘We were interested to understand how animals prioritise and balance their investment in immune defence and reproduction.’

The study focused on Drosophila melanogaster, a species commonly referred to as the fruit fly, and sometimes the vinegar fly or pomace fly.

The species has been in use for over a century to study genetics and behaviour, including the courtship ritual, which is ‘composed of complex innate behaviours that culminate with copulation’, the researchers say.

In the lab, flies were infected with bacteria including Serratia marcescens and Staphylococcus aureus, both of which can seriously affect humans.

After being infected, males and females were placed into a ‘courtship chamber’ to see whether they would mate.

Mating success was measured as the percentage of flies that mated within one hour.

Courtship and mating behaviours were similar in both infected and uninfected flies, the researchers found.

This was also true when the flies’ immune system was artificially activated using genetic manipulation.

Even more amazingly, uninfected flies mated equally frequently with both infected and healthy partners, suggesting that they do not avoid choosing mates who are infected.

Flies are not oblivious to infection, however – previous studies have shown that infected flies can show abnormal locomotion, sleep and feeding behaviours.

The study, published today in the journal Proceedings of the Royal Society B, suggests that courtship and mating behaviours are prioritised, even when other behaviours are altered during the development of the infection.

More work is needed to find out what is going on in the brain to maintain reproductive behaviours in the face of infection, the authors say.

The fruit fly (Drosophila melanogaster) is a small, common fly found near ripe and rotten fruit.

It has been in use for over a century to study genetics and behaviour.

The species has also built up a tolerance for alcohol through living in and feeding on rotting and fermented fruit.

In 2012, researchers from Emory University in Atlanta, Georgia said fruit flies actively seek out food containing ethanol to kill off parasitic wasps in their blood stream.

Thanks to a diet of fermented fruit, the flies are used to alcohol and it has little effect on them. But it is deadly for the wasps.

‘Even after being infected, fruit fly consumption of alcohol leads to death of the wasps growing within them.

‘Surprisingly, fly larvae actively seek out ethanol-containing food when infected, showing they use alcohol as an anti-wasp medicine.’

While the flies initially prefer food with a sweet flavour, they quickly learn to opt for less sweet food sources that offer more calories and nutritional value, according to another team at the University of British Columbia.

The researchers allowed fruit flies (Drosophila melanogaster) to choose between sources of liquid sugar that varied in their ratios of sweetness to caloric value.

In some instances it took the populations of flies as little as four hours to shift their preference towards more nutritious food sources – typically based on sugars like sucrose, maltose and D-glucose.

Researchers also isolated several molecular pathways in a strain of flies that appear to affect taste and feeding preference and found that blocking insulin signaling increased preference for nutritious sugars.