Mass migration from France to England took place 3,000 years ago

Mass migration from France to England and Wales 3,000 years ago replaced about HALF of the ancestry of Great Britain, study claims

Mass migration from France to England and Wales around 3,000 years ago replaced about half of the ancestry of Great Britain, a new study claims.

An international team of researchers examined the DNA of 793 ancient individuals from Bronze Age Britain, which began around 2,000 BC and lasted for nearly 1,500 years.

Results suggest people moving into southern Britain around 1300 BC to 800 BC were responsible for around half the genetic ancestry of subsequent populations.

These new migrants became thoroughly mixed in to the Southern British population in the period 1000 BC to 875 BC – likely a time of ‘intense and sustained contacts’ between many diverse communities, the researchers say,

Exact origins of the migrants cannot yet be established with certainty, but they are most likely to have come from communities in and around present-day France.

Researchers based their findings on newly-discovered and already-discovered ancient remains from British towns including Amesbury in Wiltshire, Lechlade in Gloucestershire, Ditchling Road in Brighton and Ulva Cave in Scotland.

DNA from these British samples were compared to ancient individuals recovered from parts of mainland Europe. 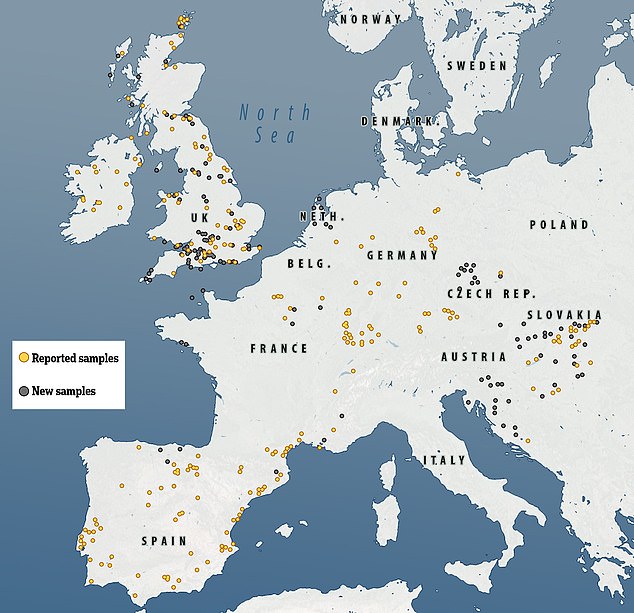 The international research team examined the DNA of 793 ancient individuals from Britain and mainland Europe. Some were newly-discovered (new samples) and some were already-discovered (reported samples) 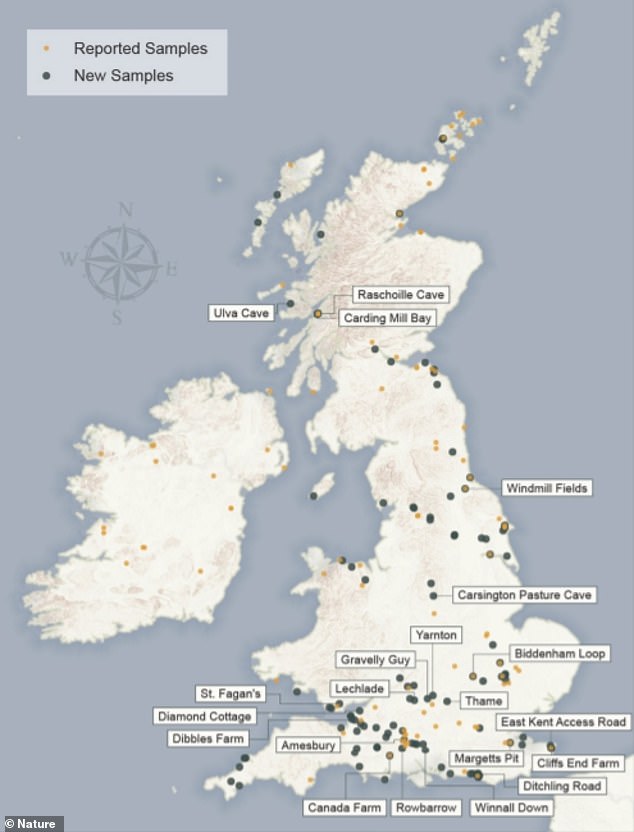 Researchers based their findings on newly-discovered and already-discovered ancient remains from British towns including Amesbury in Wiltshire, Lechlade in Gloucestershire, Ditchling Road in Brighton and Ulva Cave in Scotland. The black dots are new samples of ancient remains; yellow dots are previously published samples. The dots represent sites rather than individuals (some sites have many individuals) 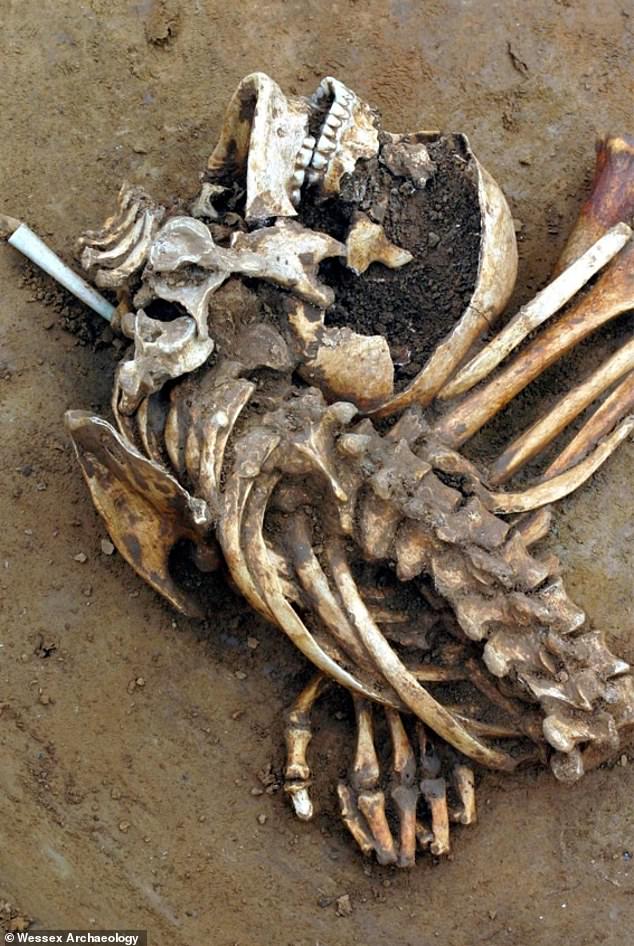 Researchers examined ancient DNA to trace the movement of people into southern Britain during the Bronze Age. Pictured is the disarticulated remains of an adult male, excavated from a large burial pit at Cliffs End Farm, Kent. His genetic profile suggests that he derived from a population outside Britain. Analysis of his strontium and oxygen isotopes suggest he may have originated from the Alpine regions of Central Europe

Researchers don’t know how many migrated during this time, or why they migrated.

In the Stone Age, flint was shaped and used as tools and weapons.

But in the Bronze Age, stone was gradually replaced by bronze.

Bronze was made by melting tin and copper, and mixing them together.

The bronze could then be poured in to moulds to create useful items.

‘We have long suspected, based on patterns of trade and shared ideologies, that the Middle to Late Bronze Age was a time of intense contacts between communities in Britain and Europe,’ said study author Professor Ian Armit at the University of York.

‘While we may once have thought that long-distance mobility was restricted to a few individuals, such as traders or small bands of warriors, this new DNA evidence shows that considerable numbers of people were moving, across the whole spectrum of society.’

Professor Armit told MailOnline that the specific areas these migrants came from are unknown, although France is likely.

‘We can rule out the migrants into Britain deriving from any specific population that we have sampled; however there are big gaps in the sampling in France,’ he said.

‘The closest genetic relatives that we do see are all from later Iron Age populations around the periphery of France. So taking all that together, and also taking into account the archaeological links in material culture, France is the most likely area of origin.’

According to the findings, the genetic structure of our island’s population changed through sustained contacts between mainland Britain and Europe over several centuries, such as the movement of traders, intermarriage, and small scale movements of family groups.

No big ‘violent invasion or a single migratory event’ replaced populations in southern Britain; rather, there was a somewhat peaceful-sounding ‘homogenisation’.

‘There may very well be episodes of violence scattered within it, but it is certainly a process rather than an event,’ Professor Armit told MailOnline.

‘We also don’t see any bias towards males in the incoming population as we might expect in a violent invasion scenario.’ 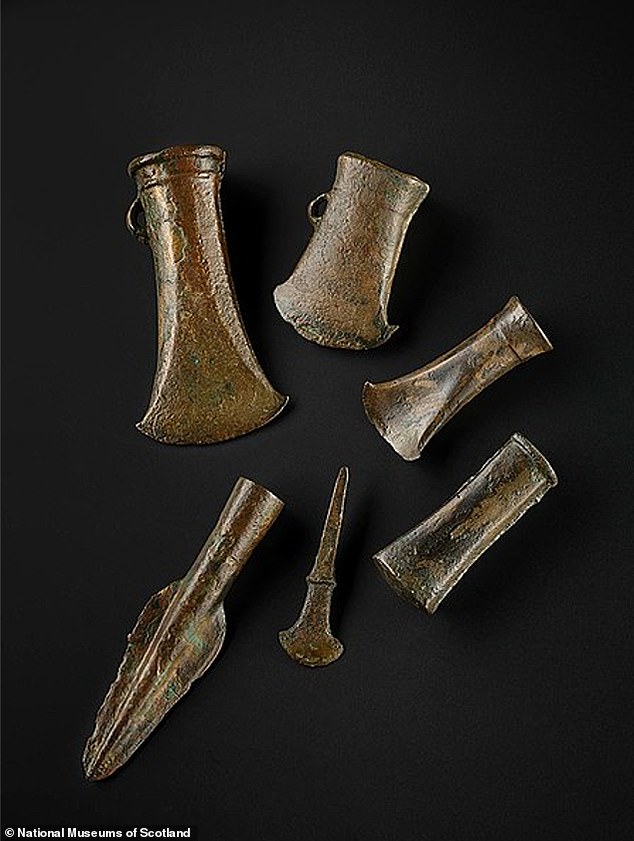 During Bronze Age Britain, bronze tools, pots and weapons were brought over from continental Europe. Pictured are bronze age tools from the National Museums of Scotland 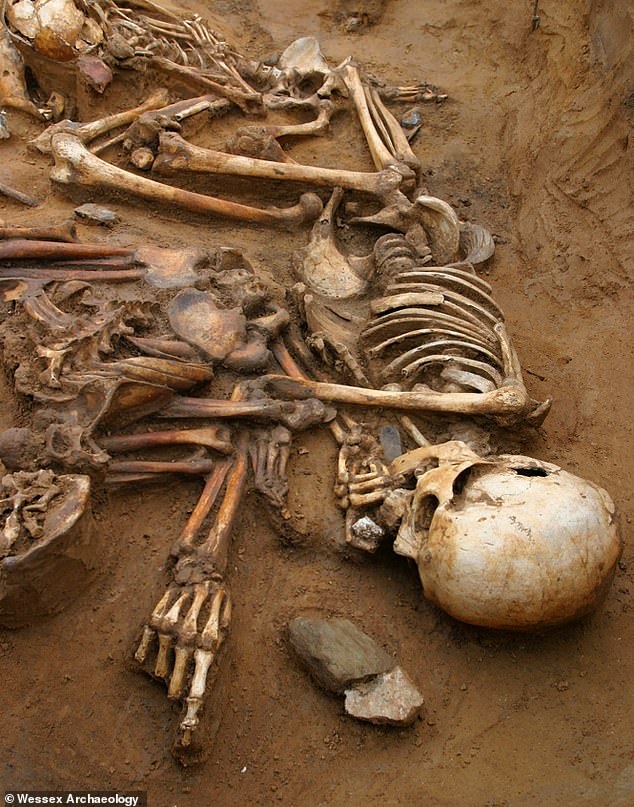 This photograph shows the skeleton of an elderly woman from the same burial pit at Cliffs End Farm, Kent

Bronze Age people retained and curated human remains as relics, and keep them for several generations, a 2020 study found.

Among the discoveries were a range of items either carved from human bones or bones belonging to someone else buried much later – likely kept as relics.

The discovery has helped researchers paint a more detailed picture of death customs of the time – with some ‘seemingly macabre’ to modern eyes.

‘People would have been coming in over at least a couple of centuries and would have most likely been inter-marrying into local communities.

‘The same process may have taken people in the opposite direction but we don’t yet have the samples from relevant areas of France to demonstrate this.

‘Essentially what we are most likely seeing is a homogenisation of populations either side of the Channel.’

The new DNA evidence also significantly strengthens the case for the appearance of Celtic languages in Britain during the Bronze Age.

Celtic languages are traditionally thought to have originated in central Europe and spread across vast areas of the continent including the British Isles, before being gradually replaced by Germanic, Romance or Slavic languages in most areas.

Interestingly, the study shows little evidence for large-scale movements of people into Britain during the subsequent Iron Age, which has previously been thought of as the period during which Celtic languages may have spread.

‘These findings do not settle the question of the origin of Celtic languages into Britain,’ said study author Professor David Reich at Harvard Medical School.

‘However, any reasonable scholar needs to adjust their best guesses about what occurred based on these findings.

‘Our results militate against an Iron Age spread of Celtic languages into Britain – the popular “Celtic from the East” hypothesis – and increase the likelihood of a Late Bronze Age arrival from France, a rarely discussed scenario called “Celtic from the Centre”.’ 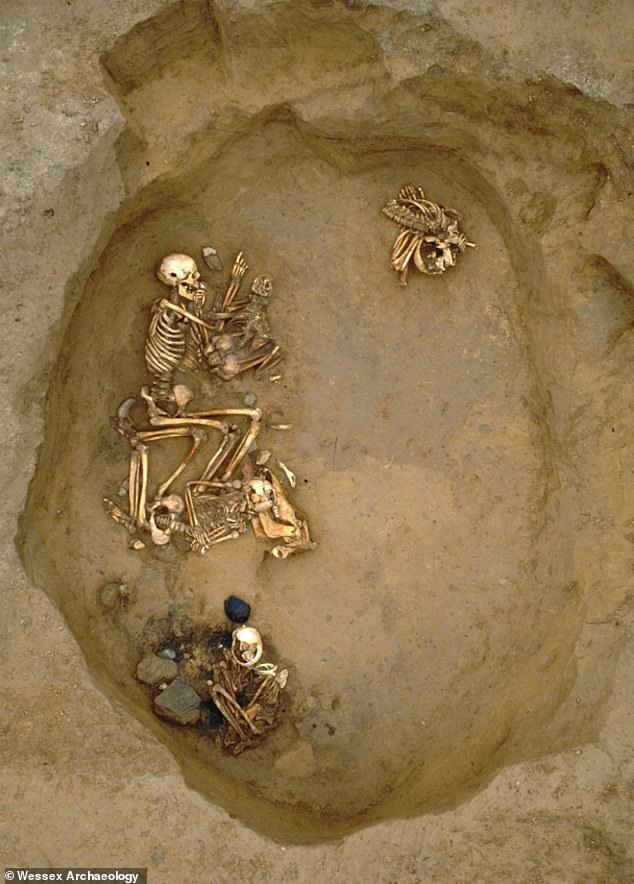 This image shows an overview of the Cliffs End Farm burial pit showing both the already pictured adult male and adult female along with a further two; a teenage girl and female child. DNA analysis has been conducted on all four as part of the present study

Migration during the Bronze Age was fuelled by milk, a recent study showed.

According to researchers, migrants from Russia brought the genes for lactose tolerance into Europe.

During the most recent Ice Age, milk was essentially a toxin to adults because – unlike children – they could not produce the enzyme required to break down lactose.

But as farming started to replace hunting and gathering in the Middle East around 11,000 years ago, cattle herders learned to reduce lactose to tolerable levels by fermenting milk to make cheese or yoghurt.

As part of the analysis of the ancient remains, the researchers also found that the ability to digest cow’s milk dramatically increased in Britain from 1200 to 200 BC, about a millennium earlier than it did in central Europe.

They found a large increase in the frequency of the allele (a variant form of a gene) for lactase persistence (the ability of adults to digest the lactose in milk) in Bronze Age populations in Britain.

Increased milk tolerance would have provided a big advantage in the former of higher survival rates among the children of people carrying this genetic adaptation.

One of the individuals analysed, nicknamed the Amesbury Archer, was buried around the year 2300 BC in Amesbury, Wiltshire, not far from Stonehenge.

A 2013 analysis of oxygen isotopes in the enamel layers of his teeth that had formed in childhood suggested he originated from the Alps in central Europe.

The Archer’s genome is from the end of the Neolithic period (3950–2450 BC), when individuals in Britain uniformly had what the authors call majority ‘early European farmer’ (EEF) ancestry.

‘This ancestry was carried to Europe thousands of years earlier by agriculturists from Anatolia, in what is now Turkey,’ Daniel G. Bradley, a professor of population genetics at Trinity College Dublin, explains in an accompanying editorial also in Nature.

The researchers found an exceptionally high proportion of EEF ancestry found in several individuals from Kent, which is very close to France.

This suggests the presence of migratory streams across the narrow Strait of Dover, which would have been busy with trade and traffic during the Late Bronze Age, according to Professor Bradley, who was involved in the study’s peer review. 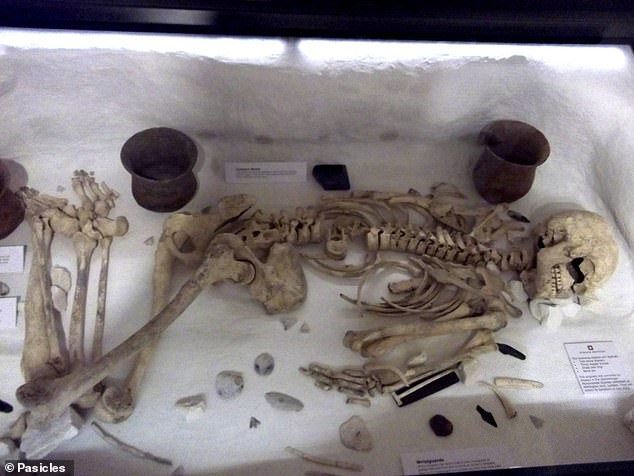 The Amesbury Archer. An early Bronze Age man whose grave was discovered during excavations at the site of a new housing development in Amesbury near Stonehenge. Now on display in the Salisbury and South Wiltshire Museum 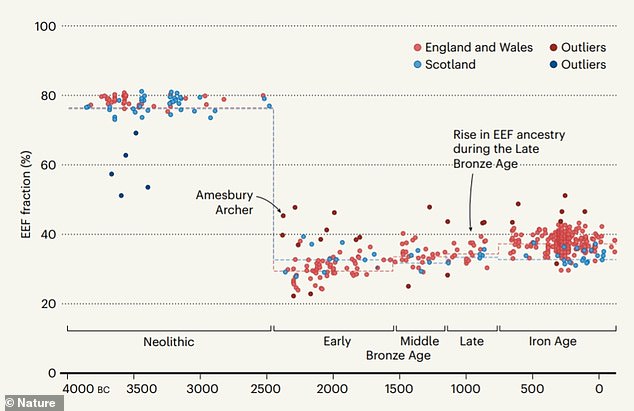 The contribution of early European farmer ancestry to individuals in ancient Britain. Researchers assessed the genomes of ancient individuals living in Britain and in continental Europe between about 4000 BC and AD 43, including the genome of a man nicknamed the Amesbury Archer. After a rapid decline in early European farmer (EEF) ancestry in southern Britain at around 2450 BC,the proportion of EEF ancestry fluctuated for about a millennium

The Middle to Late Bronze Age (1500 BC to 800 BC) was a time when settled farming communities expanded across the landscapes of southern Britain.

Extensive trade routes developed to allow the movement of metal ores for the production of bronze for making tools, pots and weapons.

These new networks linked wide-ranging regions across Europe, as seen from the spread of bronze objects and raw materials.

‘This study increases the amount of ancient DNA data we have from the Late Bronze and Iron Age in Britain by twelvefold, and Western and Central Europe by 3.5-fold,’ said author Professor Ron Pinhasi, a physical anthropologist and ancient DNA specialist from the University of Vienna.

‘With this massive amount of data, we have for the first time the ability to carry out studies of adaptation with enough resolution in both time and space to allow us to discern that natural selection occurred in different ways in different parts of Europe.’