Men and women of Roman Herculaneum had 'very different diets'

Roman men and women in the ancient Italian town of Herculaneum – which was buried under volcanic ash and pumice by the eruption of Mount Vesuvius in AD 79 – had very different diets, a new study shows.

Researchers led by the University of York found that access to food in the ill-fated settlement ‘was differentiated according to gender’.

The experts used a new approach to analyse amino acids, the building blocks of proteins, from 17 adult skeletons – 11 men and six women – originally found in Herculaneum in the eruption’s aftermath.

By measuring the isotopes of carbon and nitrogen in the amino acids, the researchers reconstructed their diets in more detail than ever thought possible.

Men in Herculaneum benefitted from more fresh fish and seafood, which was something of a luxury item, as well as grains, while women appeared to eat more meat, eggs and dairy, as well as fruits and vegetables.

Herculaneum was destroyed – together with Pompeii, Torre Annunziata and Stabiae – by the Vesuvius eruption. 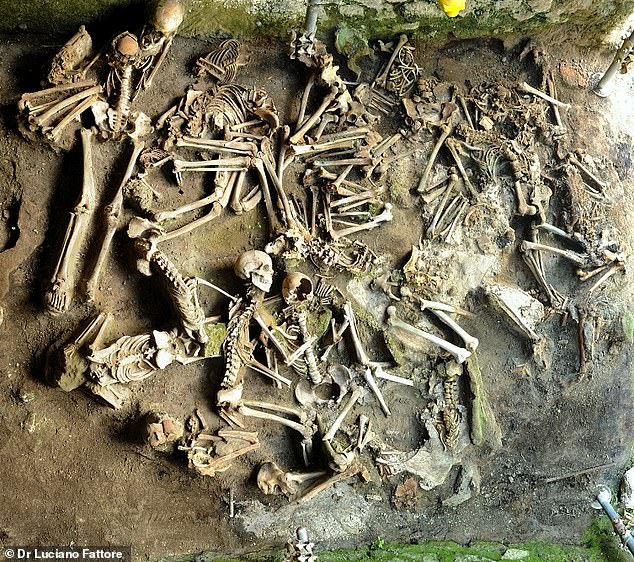 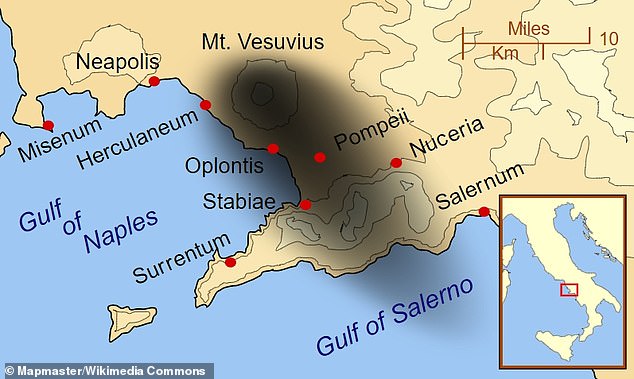 Map shows Herculaneum and other cities affected by the eruption of Mount Vesuvius in AD 79. The black cloud represents the general distribution of ash and cinder

‘Our research builds on what we know that males had greater access to marine fish at Herculaneum and more broadly in Roman Italy,’ said study author Silvia Soncin from York’s Department of Archaeology.

‘Males were more likely to be directly engaged in fishing and maritime activities, they generally occupied more privileged positions in society, and were freed from slavery at an earlier age providing greater access to expensive commodities, such as fresh fish.’

The remains of an ancient fast food joint that was buried in volcanic ash in the Roman city of Pompeii back in 79 AD has opened to tourists.

Decorated with colourful frescos, the snack bar was unearthed back in 2020 in Regio V, the north-eastern sector of Pompeii which spans some 54 hectares.

Archaeologists believed that, in its heyday, the so-called ‘thermopolium’ would have served the ancient city’s poorer residents, offering such foods as duck, paella and snails.

The diners would rarely have had a kitchen in their own residences, forcing them to visit such eateries instead.

In total, 340 individuals have been excavated from the beach and from nine adjacent fornici (stone vaults) that run parallel to the seashore in Herculaneum, near Pompeii, where people sought shelter from the pyroclastic flow.

The researchers determined the stable isotope values of amino acids from bone collagen in the remains using compound-specific stable isotope analysis (CSIA), a technique that reveals dietary patterns based on isotope ratios.

Males also obtained a slightly higher proportion of protein from cereals compared with their female contemporaries.

‘The remains of those who perished at Herculaneum in AD79 offer a unique opportunity to examine the lifestyles across an ancient community who lived and died together,’ said study author Professor Oliver Craig at York’s Department of Archaeology.

‘We found significant differences in the proportions of marine and terrestrial foods consumed between males and females, implying that access to food was differentiated according to gender.’ 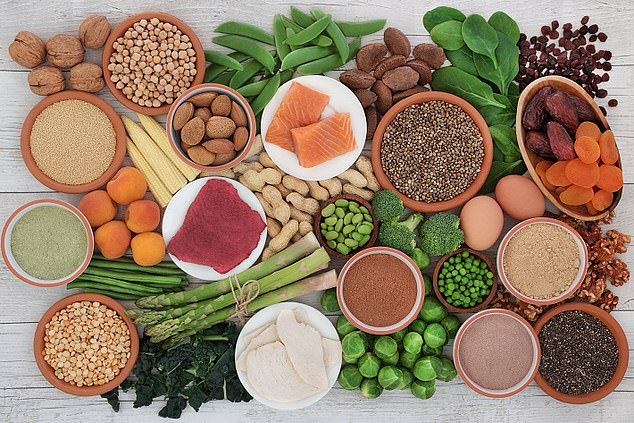 The team also estimated that the population of Herculaneum ate considerably more fish and seafood than Mediterranean populations in the mid- and late-20th century (which became more dominated by animal products).

But overall the study shows foods eaten by the Romans still make up the ultra-healthy modern-day Mediterranean diet that’s enjoyed by Italians today.

Oily fish is a key part of the Mediterranean diet, which also consists of vegetables, fruits, legumes, nuts, beans, cereals, grains, and unsaturated fats such as olive oil.

The study was conducted in partnership with Rome’s ‘Museo delle Civiltà’ and the Archaeological Parks of Pompeii and Herculaneum, amongst others, and has been published today in the journal Science Advances.

How Pompeii and Herculaneum were wiped off the map by devastating eruption of Mount Vesuvius 2,000 years ago

Hundreds of refugees sheltering in the vaulted arcades at the seaside in Herculaneum, clutching their jewelry and money, were killed instantly.

Upper stores have seldom been found among the ruins of the ancient town, which was destroyed by an eruption of Vesuvius volcano and buried under up to six meters of ash and volcanic rubble.

And, Hercula, Men, of, Roman, Women
You may also like: