This year’s Nobel Prize in Chemistry has been awarded to three scientists for their development of ‘click’ chemistry, which involves snapping together small molecules to form larger and more complex ones.

Carolyn Bertozzi, Morten Meldal and K. Barry Sharpless worked together to utilise the technique inside living organisms, in what they deem ‘bioorthogonal chemistry’.

Bertozzi and Sharpless are both from the US, and are affiliated with the California institutions Stanford University and Scripps Research respectively, while Danish scientist Meldal works at the University of Copenhagen.

Hans Ellegren, secretary general of the Royal Swedish Academy of Sciences, announced the winners this morning at the Karolinska Institute in Stockholm, Sweden.

Johan Åqvist, Chair of the Nobel Committee for Chemistry, said: ‘This year’s Prize in Chemistry deals with not overcomplicating matters, instead working with what is easy and simple.

‘Functional molecules can be built even by taking a straightforward route.’ 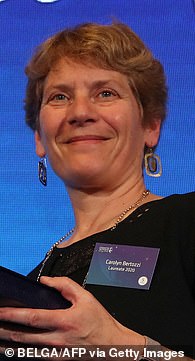 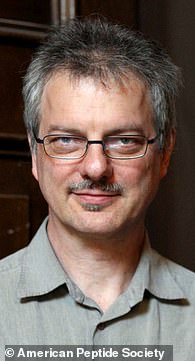 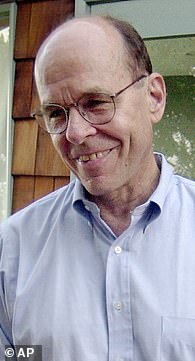 Carolyn Bertozzi, Morten Meldal and K. Barry Sharpless worked together to utilise the technique inside living organisms, in what they deem ‘bioorthogonal chemistry’ 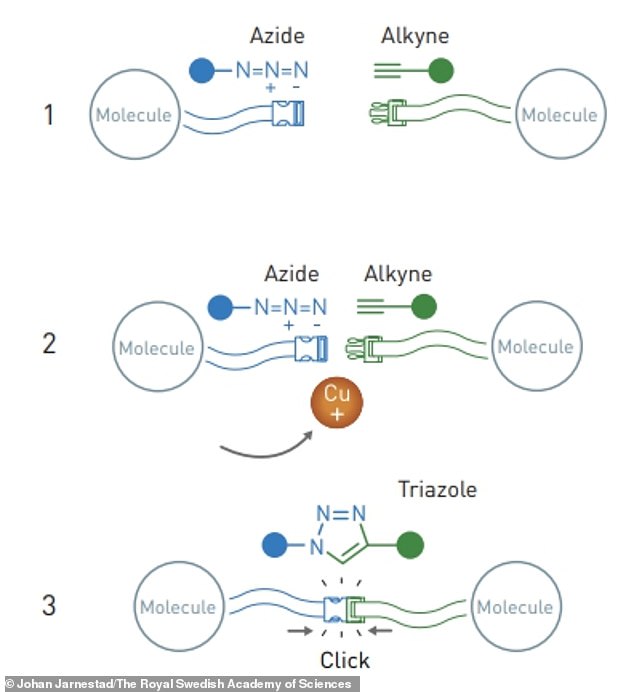 The 10 most recent winners of the Nobel Prize for Chemistry are:

2021: Benjamin List (Germany) and David WC MacMillan (USA) for their work on research into the creation of new molecules.

2020: Emmanuelle Charpentier (France) and Jennifer Doudna (USA) for the development of a method for genome editing.

Bertozzi said: ‘It’s an opportunity for me to recognise that all the work that so many trainees from my lab have done over the past 25 years and to reflect on how fortunate I have been and share in the celebration with them.’

The scientists were honoured specifically ‘for the development of click chemistry and bioorthogonal chemistry,’ the jury said.

Sharpless started the ball rolling towards the ‘ingenious tool for building molecules’ around the year 2000.

The 81-year-old coined the concept of click chemistry, where reactions occur quickly and do not produce unwanted by-products.

Shortly after, Sharpless and Meldal conducted click reactions that are known as ‘copper-catalysed azide-alkyne cycloaddition reactions’ – totally independently of each other.

These have since had widespread use in the development of pharmaceuticals, mapping DNA and creating useful materials.

Next, Bertozzi started developing click reactions that work inside living organisms, in order to map the formation of special biomolecules – known as glycans – on the surface of cells.

She first inserted an azide molecule inside a cell, which reacted with sugars to form long chain glycans on its surface.

She then used Sharpless and Meldal’s click reaction to attach a fluorescent green alkyne molecule to the end of the glycan, which allowed her to visualise their presence on the cell surface.

These bioorthogonal reactions can take place without disrupting the normal chemistry of the cell, and are now used globally to explore cells and track biological processes.

Using bioorthogonal reactions, researchers have improved the targeting of cancer pharmaceuticals, which are now being tested in clinical trials.

Sharpless also won the chemistry Nobel in 2001 for his method of steering reactions towards one of two possible symmetrical products.

He is the fifth double Nobel Prize laureate in history, following in the footsteps of John Bardeen, Linus Pauling, Frederick Sanger and Marie Skłodowska Curie.

Previous Nobel Prize in Chemistry winners include Marie Curie, who also shared the physics prize with her husband. Her eldest daughter, Irene Joliot-Curie, won the chemistry award just over two decades after her mother.

The 2021 chemistry award was won by German Benjamin List and Scottish-born David MacMillan for their work in creating new tools to build molecules in an environmentally cleaner way.

Their research aids the development of new drugs as well as in other materials such as plastics, and the Nobel panel said it is ‘already benefiting humankind greatly’. 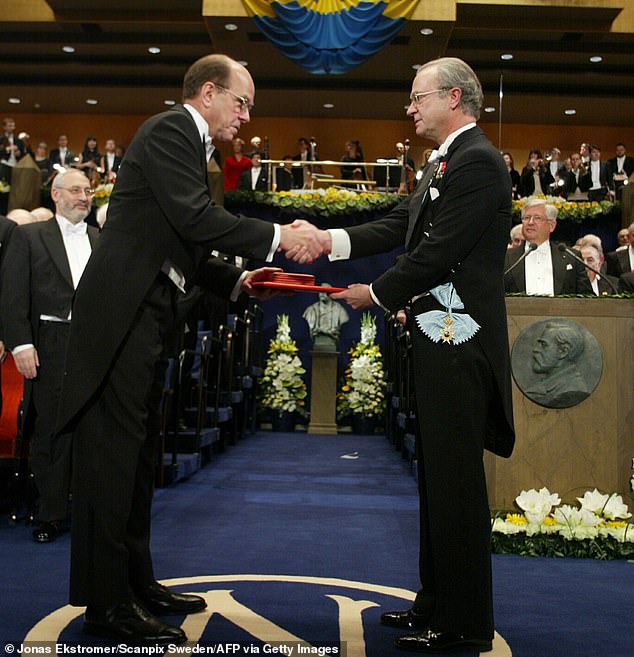 Chemistry is the third Nobel to be awarded this week, after three scientists from France, America and Austria were awarded the prize for Physics yesterday.

They showed that tiny particles can retain a connection with each other even when separated.

Swedish geneticist Svante Paabo won the prize for Physiology or Medicine on Monday, who unlocked the secrets of Neanderthal DNA.

The prestigious prizes for achievements in science, literature and peace were created in the will of Alfred Nobel, who made a fortune from his invention of dynamite and was himself a chemist.

They have been awarded since 1901 with a some interruptions, primarily the two world wars, but made no break for the COVID-19 pandemic.

The next Nobel Prize to be announced will be for Literature on Thursday, while the Nobel Peace Prize will be announced on Friday and the economics award on October 10. 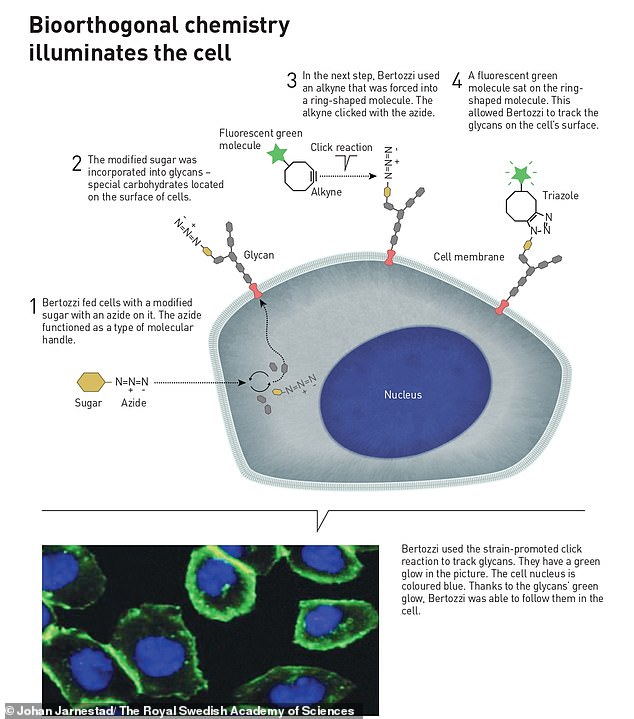 Bertozzi developed Sharpless and Meldal’s click reactions to work inside living organisms, so she could map special biomolecules – known as glycans – on the surface of cells. She first inserted an azide molecule inside a cell, which reacted with sugars to form long chain glycans on its surface. She then used the click reaction to attach a fluorescent green alkyne molecule to the end of the glycan, which allowed her to visualise their presence on the cell surface 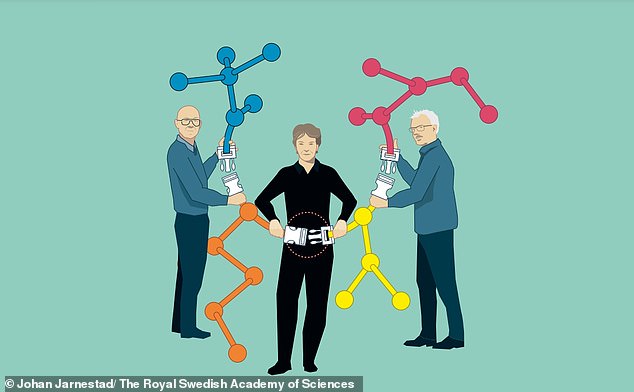 The scientists were honoured specifically ‘for the development of click chemistry and bioorthogonal chemistry,’ the jury said 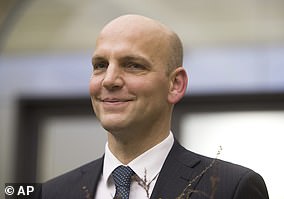 He is currently working as the director of the Max-Planck-Institut für Kohlenforschung, Mülheim an der Ruhr, in Germany.

List worked with catalytic antibodies when he started to think about how enzymes actually work and how they catalyse chemical reactions without the use of metals – driven instead by amino acids in an enzyme.

The research that won him a share of the Nobel Prize asked ‘do amino acids have to be part of an enzyme in order to catalyse a chemical reaction? Or could a single amino acid, or other similar simple molecules, do the same job?’

He built on research from the 1970s that found an amino acid called proline could be used as a catalyst – but hadn’t been widely followed up.

He found that not only could it work as a catalyst, but did so straight away, catalysing an aldol reaction, bonding carbon atoms from two different molecules.

Compared to both metals and enzymes, proline is a dream tool for chemists. It is a very simple, cheap and environmentally-friendly molecule. 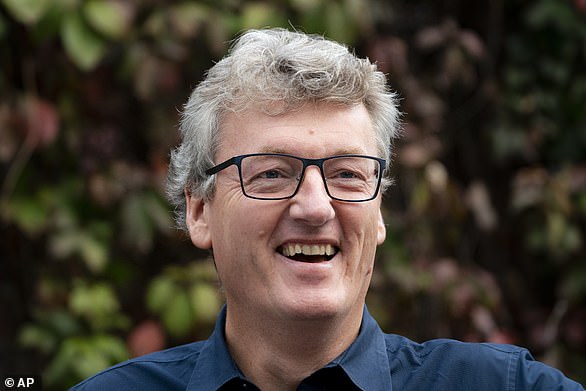 MacMillan was born 1968 in Bellshill, UK, gaining his PhD in 1996 from University of California, Irvine, US.

He is currently working as a professor at Princeton University.

MacMillan was working on improving asymmetric catalysis using metals when he made his remarkable discovery that led to the Nobel Prize.

This was an area which was attracting a lot of attention from researchers, but he noted how the catalysts that were developed were rarely used in industry.

He started to think about why, and assumed that the sensitive metals were quite simply too difficult and expensive to use, and so left them behind.

The chemist created simple organic molecules that could provide temporary accommodation for electrons and act as a stable framework.

He selected several organic molecules with the right properties, and then tested their ability to drive a reaction.

Some of the organic molecules were found to be excellent at asymmetric catalysis. Of two possible mirror images, one of them comprised more than 90 per cent of the product – similar to the work of List.