Follow
Home » Science » Rural Southern California was rocked by swarm of earthquakes including one that was 5.3-magnitude

Rural Southern California was rocked by swarm of earthquakes including one that was 5.3-magnitude

A swarm of 152 earthquakes were felt Saturday morning in California’s Imperial Valley, a rural area about two hours east of San Diego, according to CNN.

The largest of the swarm was of a 5.3-magnitude earthquake that struck at 10:55 a.m. near the town of Calipatria, and was felt as far away as Los Angeles, according to the US Geological Survey. 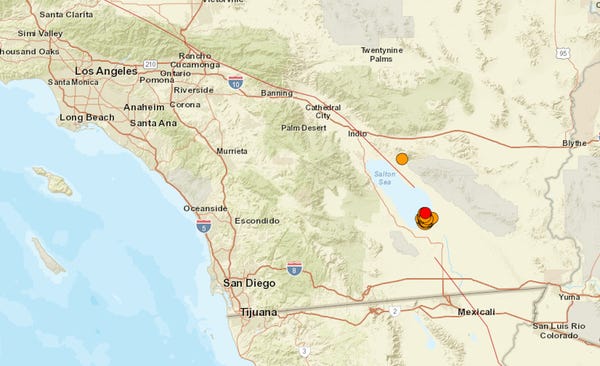 “The Imperial County Fire Department and Office of Emergency Services is currently monitoring and assessing recent earthquake activity in our region,” Imperial County tweeted Saturday. “There has not been any report of damages yet and our crews are conducting damage assessments.”

Lilia Gonzales, 40, told the Los Angeles Times that she felt the earthquake at her home in Brawley, and at first thought it was her kids fighting. When she realized it was an earthquake, she said she wasn’t worried.

“It was nothing out of the ordinary for us,” she said. “I could hear my house shaking.”

California and Nevada have an average of five earthquakes between 5.0 and 6.0 magnitude each year, according to the LA Times.