After months stranded in a Cyprus village, family is finally home in Melbourne

Shayne Ryan plugged his phone into the charger as he hopped into bed and saw an email that made his heart sink.

The Department of Foreign Affairs and Trade had contacted him early that morning offering his family a spot on a repatriation flight.

Shayne, his wife Vicky and their children Talia and William – aged six and three – had been living in a northern Cyprus rural village called Pergamos since early 2019. 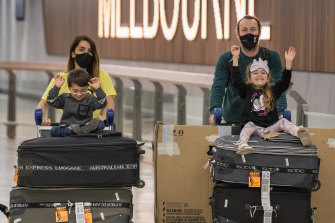 Vicky Yegen and Shayne Ryan arrive at Melbourne Airport on Monday with their children William and Talia.Credit:Jason South

They had been waiting eight months to secure a spot on a repatriation flight to Australia – and somehow he had missed the email sent several hours earlier.

Shayne leapt to his laptop to book their tickets, knowing seats on these flights tended to be snapped up within minutes. He got lucky. There were spots available on a flight from Istanbul, Turkey, in late May.

“When I got those tickets, I just knew that everything was going to change,” Shayne says. “I was absolutely elated.”

But it was only one chapter in his family’s odyssey – a long journey home involving rolling lockdowns in a foreign country, bureaucratic wrangling over an out-of-date passport and many months of waiting, without knowing if they would reach Australian soil again.

“We monitored the situation and thought, there’s just no way we can get home,” Shayne says.

In January 2019 the couple, who are both school teachers, took their children who were then aged one and three to live in northern Cyprus, where Vicky was born. The idea was to spend time with Vicky’s relatives, encourage the children to speak Turkish and expose them to life in an agricultural village that was a world away from their previous existence in Sunshine West.

They carved out an idyllic life, making regular visits to the beaches off the country’s east coast and hiking in the Kyrenia Mountains. But by 2020, the pandemic put a stop to all that.

During lockdowns, Shayne and Vicky did their best to entertain the kids. They played hide and seek, hung out with their chickens, gardened and ventured into the open fields surrounding their home, where they went for long walks and picked flowers.

But home schooling was taking its toll and work was running dry. They ate into their savings. Commercial flights home would have cost them up to $30,000 – money they didn’t have.

So in September they registered for a repatriation flight and waited and waited, until finally the email from the Department of Foreign Affairs lobbed in Shayne’s inbox. They celebrated by going to a humble restaurant to eat lahmacun – Turkish flat pizza with a topping of minced meat.

But the saga didn’t end there. Talia’s passport had expired in the time they had waited for a flight. They needed her birth certificate to replace it, but had already given it to authorities in Cyprus to secure her citizenship.

Births, Deaths and Marriages sent it to them by post, but Australia’s postal service to Cyprus was suspended due to long delays during COVID. Shayne tried tirelessly to contact the department, but “you just can’t contact them”, he says. “To this day the certificate hasn’t arrived.”

At the 11th hour, the family contacted the ABC’s Virginia Trioli and made a desperate plea for help on air. It worked. The certificate was soon faxed to the Australian High Commission in Cyprus and a new passport was ordered. The passport arrived in the nick of time: three days before they were due to leave.

Carrying 150 kilograms of luggage – several bulging bags of clothing, toys, a bicycle – the family finally arrived in Darwin just over two weeks ago, where they quarantined in Howard Springs.

On Monday they finally landed in Melbourne.

Shayne says he has never completed so much paperwork. The trip back cost $12,000 in total, including quarantine.

There are plans to go for bushwalks with the children after lockdown and catch up with friends and family. Shayne’s 84-year-old grandmother is gravely ill and he is at least thankful there is a chance to say goodbye.

He says he missed Melbourne’s variable weather – a change from the warm albeit predictable weather patterns in Cyprus – and other simple pleasures. “I’m dying to watch a game of live footy at the MCG,” he says. “Hopefully not in the too distant future.”

a, after, Cyp, in, months, stranded
You may also like: