Follow
Home » World News » After the floods come the mozzies, with fears of diseases

After the floods come the mozzies, with fears of diseases

Victoria’s floods will unleash soaring numbers of mosquitoes in the state, increasing the likelihood there will be outbreaks of serious mosquito-borne diseases, including the potentially deadly Japanese encephalitis.

Professor Jason Mackenzie, an internationally respected expert on mosquito-borne diseases at the Peter Doherty Institute for Infection and Immunity, said the floods would create the perfect breeding ground for the insects to lay and develop their eggs. 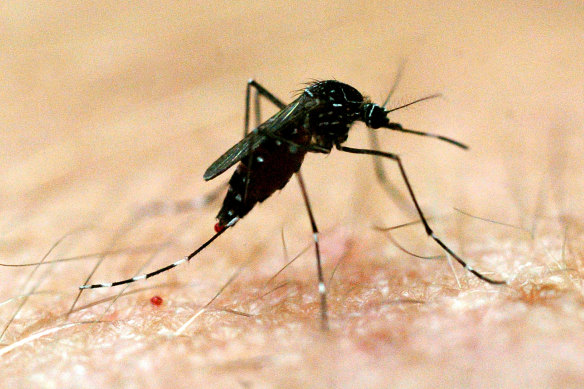 After the floods come the mozzies.Credit:Dave Hunt

“Having stagnant pools of water lying around, which will no doubt happen from the recent floods, will definitely increase mosquito numbers this year,” Mackenzie said.

Australian scientists warn a booming mosquito population will amplify the threat of the insects spreading outbreaks of life-threatening and potentially debilitating diseases, such as Japanese encephalitis virus and Ross River virus.

Mackenzie, who has spent years studying viruses, including dengue and Zika, said he was worried about the prospect of rising infections of Ross River virus, which is now endemic in parts of Victoria, and quickly encroaching on metropolitan Melbourne. The virus causes severe joint swelling and pain.

“There’s a very good chance that Ross River is going to spread a little bit further towards Melbourne this year,” he said.

The Buruli ulcer, a flesh-eating disease which has now spread from coastal Victoria to some Melbourne suburbs, has also been linked to mosquitoes.

“There’s increased potential for all those types of diseases,” Mackenzie warned.

With summer approaching and warmer weather on the way, Dr Heather Flores, research manager at Monash University’s Institute of Vector-Borne Disease, said the floodwater and heavy rainfall in Victoria would activate mosquito eggs to hatch after a dormant winter.

Flores warned there could soon be clouds of the blood-sucking flying insects buzzing around. 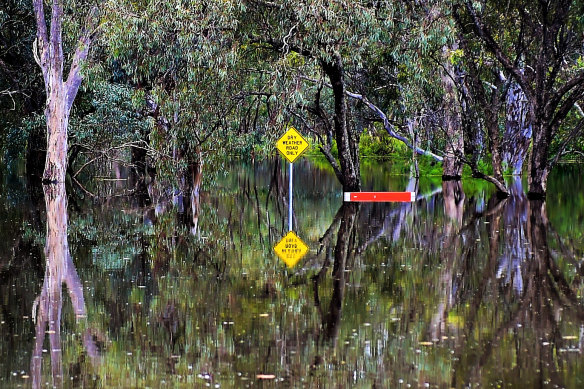 “It’s definitely a big concern, and what we know for sure is the floods and heavy rainfall is going to have big impact on mosquito numbers,” said Flores, who oversees the institute, which brings together some of country’s top scientists to address the increasing threat of infections transmitted by mosquito bites.

Professor Ary Hoffmann, chair of ecological genetics at the University of Melbourne, said a projected onslaught of heavy rainfall and stormy conditions in the warmer months would fuel mosquito populations.

While mosquitoes are a problem every Australian summer, the shock arrival of Japanese encephalitis had changed the landscape of mosquito-borne diseases. An outbreak seeded in piggeries led to dozens of infections and five deaths earlier this year.

Flores said Victorians were at increased risk of Japanese encephalitis because the disease could circulate between mosquitoes, birds and pigs, in addition to humans. 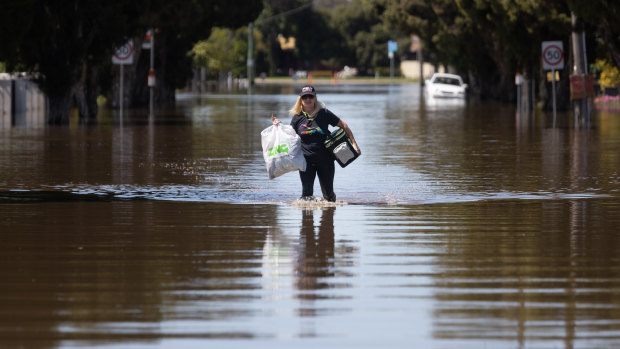 A woman carries her belongings through the floodwater in Shepparton South.Credit:Jason South

“There’s so many potential hosts that can essentially keep that virus circulating in the population and potentially remain unknown to us,” she said.

Extreme weather has historically contributed to surges in mosquito-borne viruses, most notably the outbreak of Murray Valley encephalitis virus in the 1970s. Above-average rainfall also fuelled a major outbreak of Ross River virus in northern NSW and south-eastern Queensland in 2014-15.

Flooding in Victoria in 2017 was also closely linked to the state’s largest outbreak of Ross River virus, which caused an almost five-fold increase in infections.

Record-breaking rainfall and warm temperatures are also believed to have been a significant factor in Japanese encephalitis gaining a foothold in Australia.

The virus, which arrived in Australia for the first time earlier this year, has been genomically linked to fatal cases in the Tiwi Islands and Papua New Guinea. Scientists suspect it was carried to the Australian mainland by migrating waterbirds – or mosquitoes blown in by monsoon rains.

Globally, Japanese encephalitis, spreads between waterbirds, pigs and humans, and kills about 17,000 people a year. But before last summer it had never been detected south of Cape York.

Experts say the deadly disease was brought into Australia by the warming climate and is now here to stay, with vaccines to soon be distributed to people living in high-risk areas, including on the Murray River.

Fewer than 1 per cent of people who are infected develop clinical illness, but among those who do, the virus can be deadly as it moves into the spinal cord and brain.

Flores said it was almost impossible to predict how many more mosquitoes Victoria should expect this summer, as the population boom was dependent on rainfall and the amount of stagnant water that was left. Adult mosquitoes generally only live about three weeks.

On Monday, the Victorian Health Department warned about rising numbers of mosquitoes, and asked people in flooded areas to remove stagnant water from around their homes to stop breeding.

People in flooded areas are urged to wear long, loose-fitting clothes if possible, amid warnings mosquitoes can bite through tight clothing. Heavy-duty mosquito repellents and the use of netting or insect screens is also recommended.

Mackenzie said Japanese encephalitis had the added threat of an infected person travelling around the country, carrying the virus with them, and unknowingly sparking an outbreak when they were bitten by another mosquito, which could then spread the virus to other humans or animals.

Symptoms of Japanese encephalitis include fever, headache, aching muscles and fatigue. Some people will also develop a rash. While the virus is not considered fatal, in rare cases a person can experience symptoms for more than a year.

“It’s just so important for people to be vigilant,” Hoffmann said. “That’s really the key here – do whatever you can to minimise mosquito breeding sites.”