A judge ordered Tuesday that jurors should remain anonymous for the case against a former suburban Minneapolis police officer charged in Daunte Wright’s death.

Former Brooklyn Center Officer Kim Potter, who is white, fatally shot Wright, a 20-year-old Black motorist, on April 11. She’s scheduled to go on trial Nov. 30 on a charge of second-degree murder. The city’s former police chief said he believed Potter meant to use her Taser instead of her handgun.

Hennepin County Judge Regina Chu ruled Tuesday that court personnel and attorneys involved in the case shall not divulge the names or other identifying information about the jurors and alternates except to a very limited number of people. She said the court won’t release the jurors’ names and contact information until sometime after the trial. Jurors will be referred to in court only by their numbers. 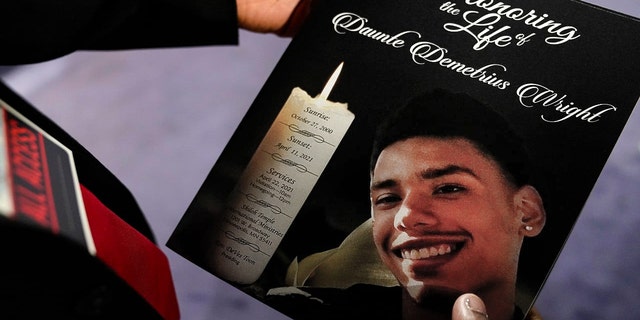 The program for the funeral services of Daunte Wright is held by a mourner at Shiloh Temple International Ministries in Minneapolis, Thursday, April 22, 2021. Wright, 20, was fatally shot by a Brooklyn Center, Minn., police officer during a traffic stop. (AP Photo/John Minchillo, Pool)

Under Chu’s order, deputies will keep people away from the jury during the trial during the day, and they’ll be fully sequestered during deliberations.

“It seems that Hennepin County judges are of the view that any time we’re prosecuting a former police officer there’s reason to have an anonymous jury,” Walker said in an interview. “That’s a troubling trend. I don’t think it’s consistent with the transparency requirements of our criminal justice system, and I think the media here will be evaluating its options to ensure that both the press and the public can thoroughly monitor the administration of justice.”

Chu last week denied media requests to broadcast, livestream and record the proceedings in Potter’s trial, saying the public and media will have ample space to view the trial in the courtroom or in designated overflow rooms.

Under Minnesota court rules, audio and video coverage of a criminal trial is normally barred unless all parties consent. Potter did not.

Chauvin’s trial, Minnesota’s first criminal case in which gavel-to-gavel coverage was allowed, was broadcast and livestreamed. But Chu said Potter’s case does not present the same extraordinary circumstances, including the unknowns of the COVID-19 pandemic and the need to maintain social distancing in the courtroom at the time, the intense public and media interest, and security concerns.

Anonymous, ex, for, jury, ordered
You may also like:

Will Millennials and Gen Z Have Enough Money To Retire?

Bill Maher questions Met Gala mask policy: ‘But if we’re all vaccinated, do the germs know who the good people are?’