A hot air plume is set to arrive from the Canaries islands this week, pushing temperatures up to the high teens in parts, predominately in the south-east, though some other regions, mainly in the West of Scotland, will face heavy rainfall as a new wet weather front moves in, according to the latest BBC weather forecast. It comes as the UK experiences “extremes” of weather with some of the warmest conditions seen in several months coming as other areas, including southern Wales, saw two month’s worth of rain within just 24 hours.

“It is a very stubborn weather front, it is still with us over the course of today.

“So it is roughly stuck in the same place but so many other parts of the country are actually enjoying some fine weather. 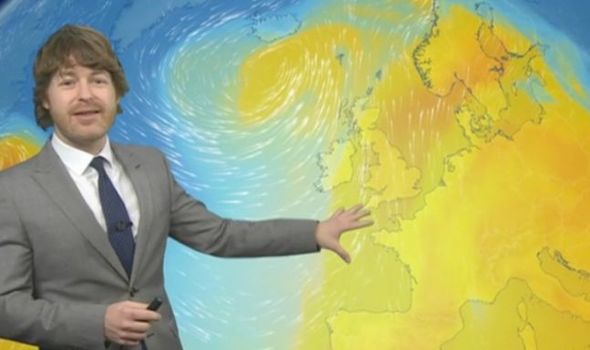 He continued: “And yes it is going to be getting milder of the coming days because we are going to keep these southerly winds.

“But we are stuck with the weather front through the night and into tomorrow and you can see part of the West Country, just about Wales, the midlands, maybe into the Peak District and Yorkshire we have some rain in the forecast through tonight.

“So Monday starts of pretty wet across some of these western, central and northern areas but there is also going to be plenty of fine weather.

“The milder conditions will be in the south-east of the country.”

Read More: Sub-zero conditions to return as snow not ‘ruled out’ for March 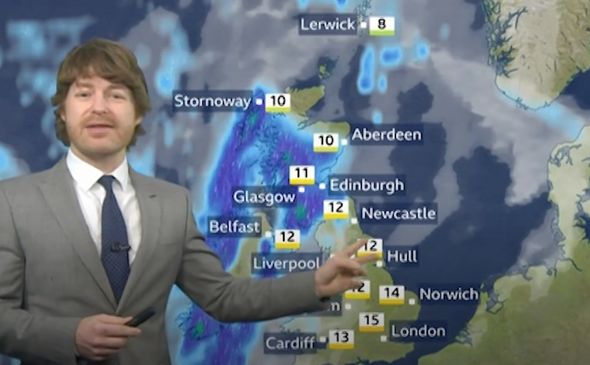 The BBC weather presenter added: “There is nasty weather front with heavy rain and strong winds coming our way for Tuesday,

“But notice a totally different story there for folks in Hull, Norwich, London, Southampton as well. I think some sunshine on the way, 15, 16, 17 degrees.

“So yes I think it will be warming up over the next few days, we have got some very warm air sitting close to the Azores also of the coast of Portugal

“You can see a nice southerly wind pushing in but it is not for everybody, it is going to be very confined to southern and south-eastern areas. 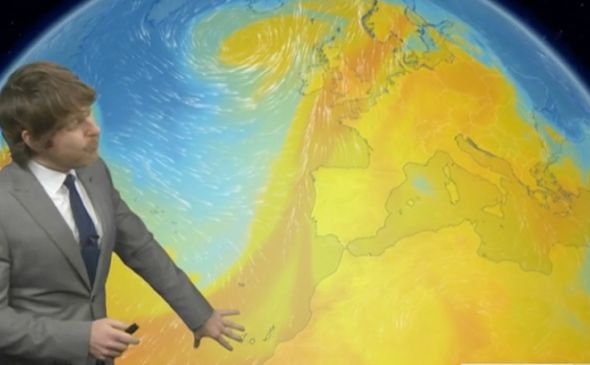 It comes as Met Office forecasters have warned an area of low pressure to the North West will bring dust from the Sahara across to the UK in the coming days.

The low pressure is “feeding” winds “into the UK from the Canaries”.

This could lead to brightly coloured sunrises and sunsets, and Britons could notice some dust settings on cars.