Victoria is bracing for a “crisis” coronavirus winter as the combination of rising cases, the arrival of new sub-variants and colder weather threatens to fuel a major outbreak that could ramp up pressure on overcrowded hospitals and the return of some public health measures.

The state’s average number of daily new coronavirus cases jumped 25 per cent over the past fortnight to nearly 12,000 cases on Friday, as the spread of the now-dominant Omicron BA.2 infected even the architect of Victoria’s COVID-19 response, Brett Sutton. 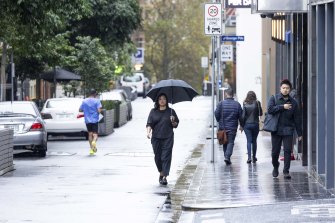 Experts are warning of a COVID “crisis’ in Victoria over the coming winter.Credit:Wayne Taylor

The state’s chief health officer tweeted on Friday that he was “feeling pretty rubbish” with a “razor blade throat and painful cough” and praised the benefits of three vaccine doses.

Highly contagious Omicron sub-variants that drove sudden infection surges in South Africa and the US have been identified in Victoria, while leading epidemiologists warned Australia must remain vigilant about monitoring the spread of COVID-19, including total case numbers and new sub-lineages.

The country’s booster coverage and child vaccination rates must also improve, they said.

There have been 15 wastewater detections of Omicron sub-variants BA.4, BA.5 in Victoria and five of the BA.2.12.1 sub-variant.

Victoria’s health authorities said these sub-lineages are more transmissible than Omicron BA.2, but do not cause more severe disease and are not yet at levels that would contribute to rising cases.

However, James Trauer, head of Monash University’s epidemiological modelling, warned the arrival of new sub-variants, combined with flu season and Australia’s upcoming winter, could result in a major spike in cases that might overwhelm hospitals.

“The thing that’s different about us compared with countries in the northern hemisphere, is that we’re going to be heading into two things at once: winter and the BA.4 and the BA.5 epidemics,” Trauer said.

“If we do have a major crisis period, which seems like it’s on the cards, then I think we will need to look at reinforcing the least restrictive and most effective interventions, which include things like increasing use of face masks,” he said.

Victoria recorded 491 hospitalisations and 18 deaths on Friday. Across the country, 53 per cent of people have received their booster shot and 84 per cent are fully vaccinated.

It is not known whether the spread of Omicron sub-variants would follow the same trajectory as countries overseas, but there is evidence that after being infected with the Omicron sub-variant BA.1, reinfection is still possible with sub-lineages.

Experts also point to waning immunity from booster or second doses, weakening compliance with remaining health measures and increased crowding in poorly ventilated indoor spaces during winter as reasons for another possible spike.

While vaccines provide good protection against severe illness, they are less protective against infection.

Stuart Turville, a virologist at the Kirby Institute, said it was inevitable that entering the winter months would “drive up numbers” and the arrival of Omicron sub-variants could lead to another spike.

But he was mostly concerned about the return of another “wild card” variant, such as Omicron, that he expects will re-emerge every 12 months, with unpredictable mutations.

Victoria’s worsening hospital crisis came to a head this week when Professor John Wilson, a respected doctor at The Alfred hospital, quit after 30 years of service, citing untenable and deteriorating conditions in Victoria’s healthcare system.

Extraordinary measures, including moving patients out of overcrowded emergency departments into hospital corridors and stretched wards, are being proposed as doctors warn of rising risks to health.

Turville said authorities must continue to be vigilant in keeping up with efforts to monitor new sub-variants with genomic sequencing.

“Although we’re highly vaccinated, and we’re doing the right thing, we’re still accumulating quite a few deaths on a daily basis,” Turville said.

Doherty Institute director Sharon Lewin said Australia must improve its data collection and look to approaches in Britain, where authorities systematically swab about 150,000 people in different demographics every two weeks.

Professor Allen Cheng, outgoing co-chair of the Australian Technical Advisory Group on Immunisation, said while the time for mandates was over, there was nothing stopping people from taking precautions.

The country’s booster shot coverage was not ideal, he said, and child vaccinations could also be higher.

“Ideally, it would good to have more people getting their third and then now fourth doses, as recommended,” Cheng said.

However, he noted it was positive that at least third dose coverage was higher among older people than the young, whereas it was the opposite in Hong Kong.

A Victorian Health Department spokesman said it was monitoring the recent rise in cases, noting an increase in cases in schools following school holidays and regular rapid-antigen testing.

“We continue to monitor and respond to the COVID-19 situation in Victoria and it’s important that Victorians continue to observe good COVID safe practices, which can protect you from getting this virus,” he said.

“The best thing Victorians can to do protect themselves and their community from COVID-19 is get up to date with their vaccinations.”