Singapore: When Martin, a 63-year-old resident of west Jakarta, lost his mother-in-law to COVID-19 last week, he set about organising her cremation.

But when he and his family approached funeral operators and agents, they were astounded as they were quoted prices as high as 65 million rupiah ($A6000), many times the usual cost.

Workers check a cremation machine in Indonesia before cremating a COVID-19 victim.Credit:Getty Images

“Upon hearing it, my wife said, ‘Wow, the cartel has taken over [the business]’,” Martin, who did not give his surname, told The Sydney Morning Herald and The Age.

The family, he said, eventually settled for paying Rp45 million ($A4200) for a cremation in the port city of Cirebon, several hours’ drive east of the capital. But when he arrived there he realised he had still been charged far in excess of what he should have been.

“I was told by the crematorium [staff] in Cirebon that the cremation service is Rp2.5 million and if it’s COVID [they] have to add a couple of hundred of thousands,” said Martin, who has also had two other members of his extended family die from the virus.

“So perhaps the normal price for COVID is around Rp3 million but I have to pay Rp45 million.” 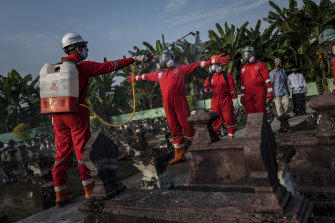 A volunteer in Yogyakarta is sprayed with disinfectant after conducting a burial the body of a woman suspected to have died from COVID-19. Credit:Getty Images

As more than 1000 people now die each day of the virus in Indonesia, the new global epicentre of the pandemic, Jakarta police are investigating whether some funeral service operators had exacerbated the pain of grieving by inflating cremation prices.

“Someone reported this to me, saying that cremation is charged with a hefty Rp45 million fee, and Rp25 million for caskets, Rp7.5 million for transportation and Rp2.5 million for other fees,” he said in an Instagram video.

“This means a relative of a COVID-19 victim has to pay Rp80 million for a cremation. Could you still smile receiving the money above other people’s misery?“

The body of Martin’s mother-in-law was transported along with another casket from Jakarta to Cirebon.

Jusuf Hamka, a crematorium owner, also attacked the over-charging by what he called “inhuman cartels” while saying his business would accept cremation of bodies for Rp7 million ($A655).

Yusri Yunus, a Jakarta police spokesman, said on Friday an investigation was continuing while Ahmad Riza Patria, the Jakarta Deputy Governor, called for services not to set unreasonable prices.

The Herald and The Age contacted three crematoria in Jakarta and three on the outskirts of the city but of the two that responded, one said it did not conduct cremations for COVID-19 victims and the other, which was booked out until next week, said it charged Rp9 million.

There is increasing demand as the fatality rate climbs – there were 1449 deaths across the country recorded on Thursday, a record for the third day in a row and Indonesia’s largest single-day increase, as the overall toll approached 80,000. 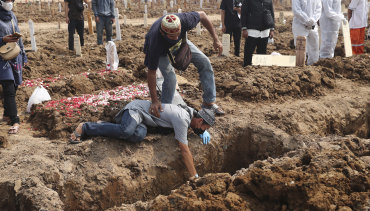 A man grieves during the burial of a relative at Jakarta’s Rorotan cemetary. Credit:AP

The rapid spike in deaths has prompted Jakarta’s provincial government to begin preparing more space in the burial ground at Rorotan cemetery in Jakarta that has been set aside for people who have passed away from the virus. The three-hectare plot has been expanded to 10 hectares.

While hospitals have been inundated with the infected, many people have also died isolating at home or in “places outside hospitals” such as on the way there or while in a tent at a makeshift facility waiting for a bed.

Independent virus data collection group LaporCOVID-19 said on Thursday there had been 2491 recorded deaths in such circumstances including 1215 in Jakarta.

Those grim figures were reported as President Joko Widodo is urged by the World Health Organisation to impose tougher emergency social restrictions while he faces growing resentment about the partial lockdown and a glacial distribution of social assistance packages.

In Bandung, the capital of West Java, this week hundreds of demonstrators including students, motorcycle taxi drivers and street vendors protested against the curbs and the impact on their livelihoods, with riot police firing water cannons and discovering five protesters with molotov cocktails in their bags.

It may not be the last of such scenes, according to Yogyakarta-based academic Made Supriatma of Singapore’s ISEAS-Yusof Ishak Institute.

“I am afraid that the social effect of this pandemic is not out yet,” he said on the Non-Aligned Podcast.

“I know that people are angry. When you go to social media … a lot of them are just pissed off about the lockdown because they cannot work. If it drags on for a couple of more weeks they’ll go to the streets, that I’m pretty sure about.”

Cartel, cremation, D, of, price
You may also like: