Girl, 12, was ‘sexually touched’ by a man in his 60s at a bus stop before heroic bystander stepped in to confront him

A 12-year-old girl was ‘sexually touched’ by a man when she sat next to him on a bench near a bus stop in Essex.

The horrifying incident happened last month, just as passengers were getting off a bus right next to where it happened.

A heroic woman, who saw the man touch her, confronted and faced down the attacker.

Police are keen to speak to this witness, and are appealing for her to come forward.

Other members of the public also valiantly stepped in, allowing the young girl to get away and raise alarm.

The suspect is described as a white man, aged in his 60s, with short grey hair.

He was seen wearing a pinstriped suit and a black jacket.

The incident happened just after 2pm at the Southend bus depot on Chichester Road in Southend on Saturday 29 October. 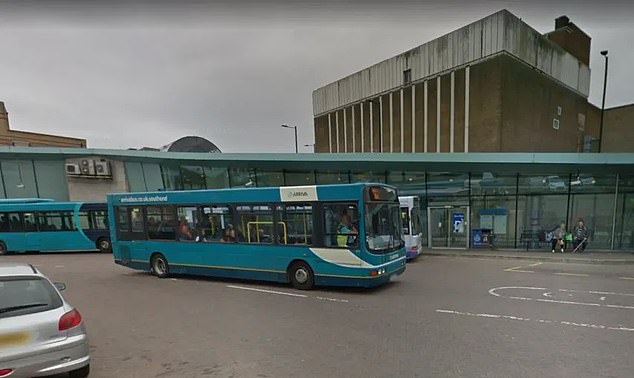 The horrifying incident happened last month at the Southend bus depot, just as passengers were getting off a bus right next to where it happened

PC Kathryn Willett of Southend CID said: ‘We believe this was an isolated incident, but we are really keen to trace this suspect and arrest him.

‘Quite simply his actions were criminal and his young victim was understandably distressed by this incident.

‘A bus was unloading right by this incident as it happened and we are convinced people on there may have seen it happen – if you did please contact us.

‘Equally the brave member of the public who stepped in is a key witness and we are really keen to speak to her.’

Essex Police are investigating the incident and are appealing for witnesses to come forward, and urge anyone who may have information to get in touch.

Alternatively you can go online by submitting a report on their website or by using our online Live Chat service available Monday to Friday (excluding public holidays) between 10am and 9pm.