A collection with plenty of point: Grandmother-of-four in her 70s is only person in Britain to collect BARBED WIRE

A pensioner who has spent two decades collecting barbed wire believes she is the only person in the UK to collect the spiked steel fencing.

Jacky Smith, from Christchurch, Dorset, picked up her prickly hobby more than 20 years ago and says she finds the history behind barbed wire ‘fascinating’.

Others argue that her £1,400 collection might be the ‘dullest’ in the country.

But the retired English teacher, who is in her 70s, explained how a trip to Texas kickstarted her unusual pastime.

‘I came across a museum in Texas called the Devil’s Rope Museum – it was all about barbed wire.

‘I purchased a zip lock bag of 4in pieces of wire from there which contained an information sheet about barbed wire. I became slightly obsessed ever since.’ 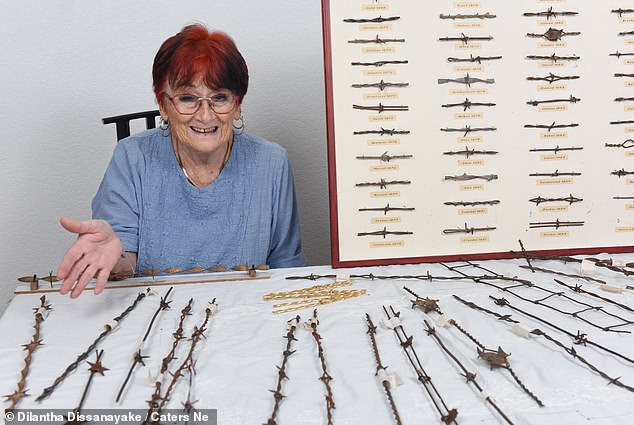 Pensioner Jacky Smith, from Christchurch, Dorset has spent the last two decades assembling a formidable £1,400 collection of barbed wire (above) 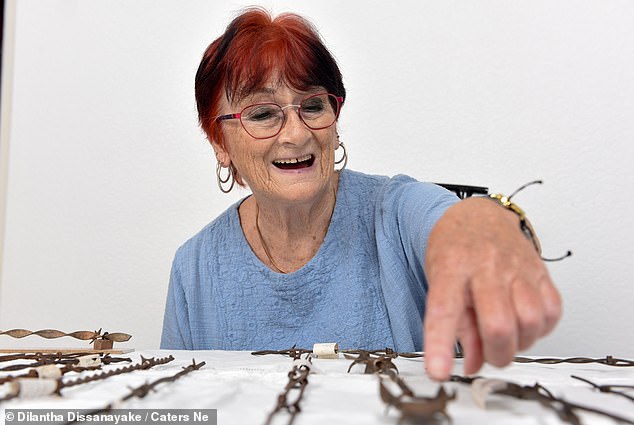 The retired English teacher, who is in her 70s, believes she is the only person in the UK to collect the spiky steel fencing 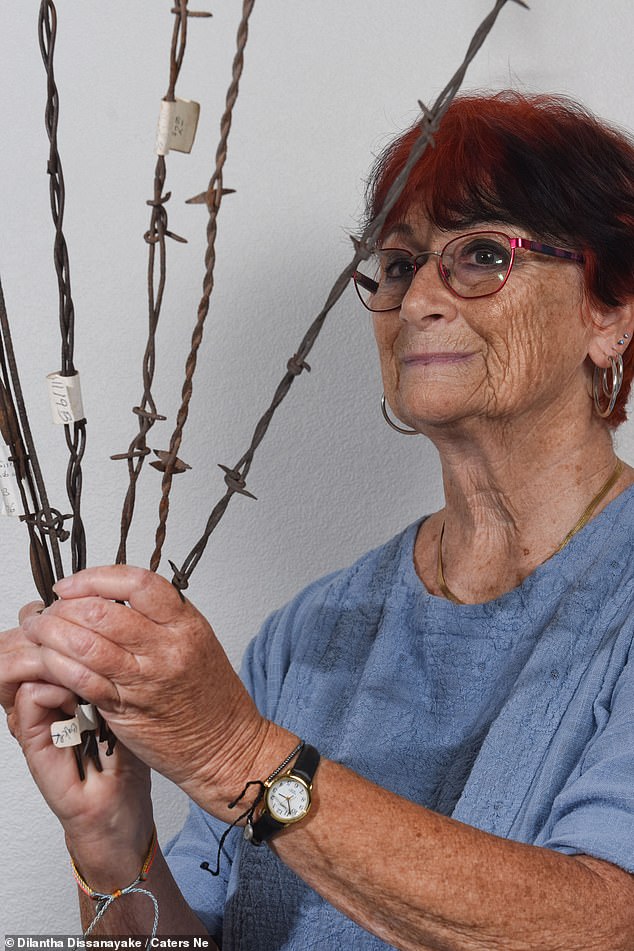 Before the pandemic, Jacky would visit rotary clubs, church groups and even The Women Institute to provide informative talks

Jacky has decorated her hallway with approximately 90 unique pieces of barbed wire, with some dating back 160 years to the American Civil War.

And her interest in the spiky steel fencing even led her to decorate her toilet in a barbed wire theme.

She has a monthly subscription to a barbed wire magazine from America, and says she ‘always makes time’ to visit museums or conventions when she visits the States.

Before the pandemic, Jacky would visit rotary clubs, church groups and even The Women’s Institute to provide informative talks about barbed wire. 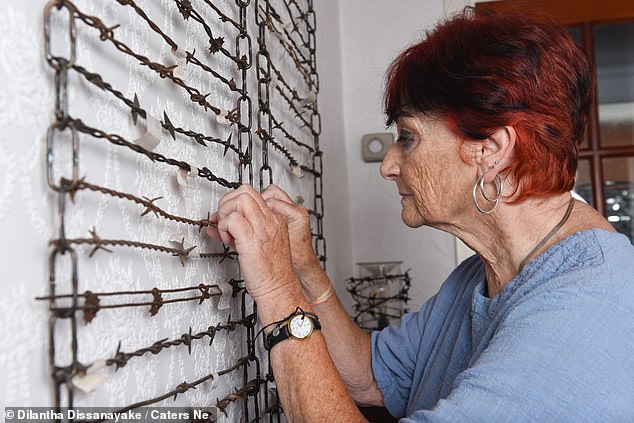 Her prickly passion began after a trip to Devil’s Rope Museum, Texas and she explains she has been ‘slightly obsessed’ ever since 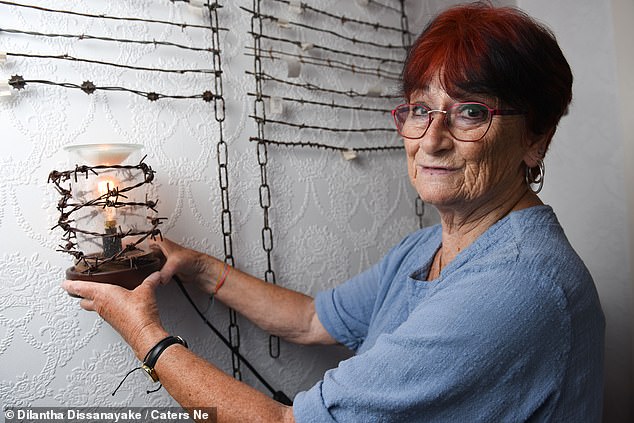 Jacky has decorated her hallway with approximately 90 unique pieces of barbed wire, some dating back more than a century to the American Civil War 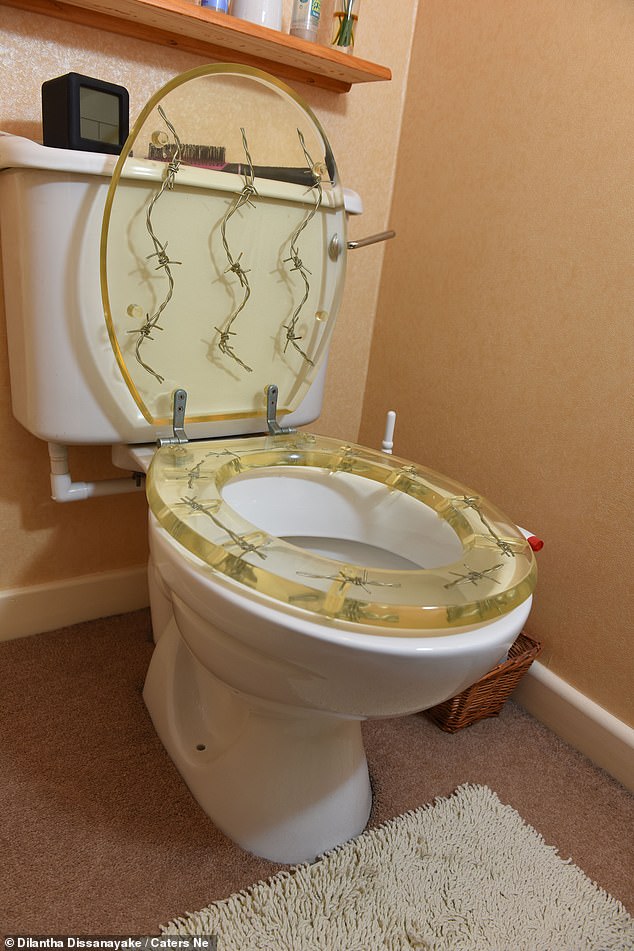 She continued:  ‘I believe I am the only person in the UK to collect it – it is much bigger in the US and Australia.’

‘Some people may consider my hobby as boring and unusual but it is so interesting.

‘My two kids think it is weird and my husband tolerates it. But many people enjoy listening to the history.’

The pieces of 18-inch wire that make up her prized possessions range in price from as little as a penny to over £200.

But much of Jacky’s collection was gifted by kind collectors, who she has met online.

She said: ‘I’ve got 90 different barb wires on display in my hall which is a talking point when I have guests.

The history of barbed wire: From agricultural upbringing to World War trenches

The first barbed wire patent in the United States came from Lucien B. Smith of Kent, Ohio, who is regarded as its inventor.

The steel fencing became the first wire technology capable of restraining cattle, and was significantly cheaper and easier to maintain than its wood alternatives.

To this day, barbed wire is used to fence livestock in or keep them within the safe confines of a perimeter.

In making agriculture more accessible, some academics argue the American West was changed forever as the prairies were significantly easier to farm. 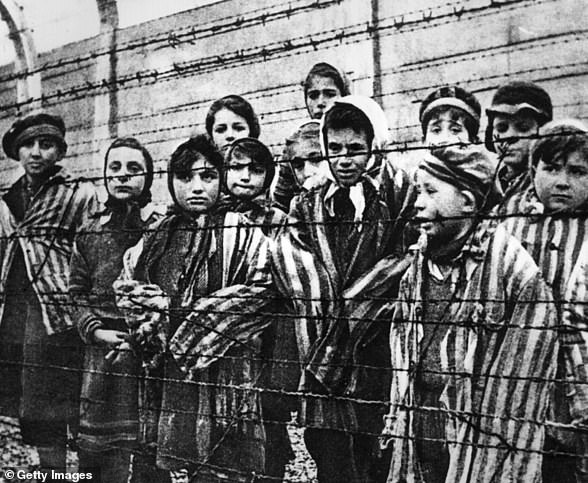 A group of child survivors behind a barbed wire fence at the Nazi concentration camp at Auschwitz, January 1945

The first military use of wire obstacles was recorded during the 1863 battle of Fort Sanders, Knoxville, Tennessee and again saw ‘significant use’ in the Second Boer War 1899-1902.

In the coastal defences seen in the Second World War, barbed wire was used to delay and disrupt infantry columns who could then be targeted by machine gun fire.

Even to this day, barbed wire is used in multiple environments from farming to security. 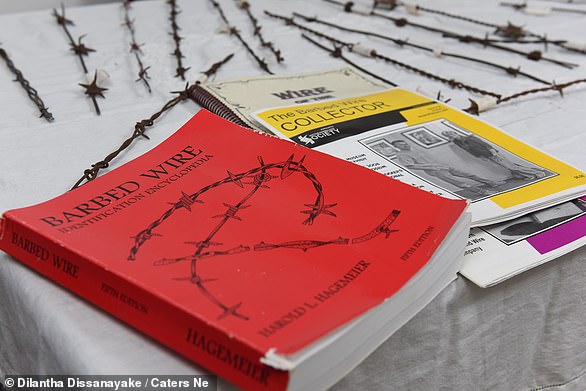