A “hardcore” convicted felon was arrested in Florida after being caught on a security camera peeping into the bedroom of a teenage girl, authorities said.

Judd said Pantoja was caught on video during each incident, and the sheriff released footage showing the suspect outside the teen’s window during the most recent incident

“He’s got a hitch in his giddy-up to be trying to look into a child’s window before 7 o’clock in the morning,” an angry Judd said. “Oh, and he’s carrying a sprinkler. I guess that’s so if anybody sees him, he will tell them he’s working on the sprinklers.”

Pantoja, who was employed by a landscaping company at the time, allegedly drove his work truck to the home. Employees told investigators he didn’t have any nearby jobs assigned to him at the time, Judd said.

But the vehicle’s GPS system indicated Pantoja was at the home on both occasions, the sheriff said. 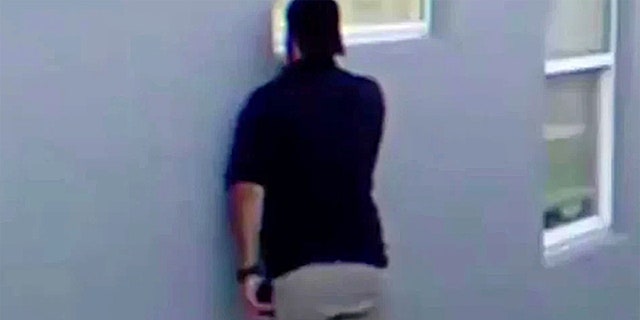 Santos Pantoja, a 39-year-old married ex-con who previously served prison stints for manslaughter and burglary, was caught on camera prowling outside an Auburndale home on May 24.
(Polk Sheriff)

“So at the end of the day, we’ve got a hardcore felon, two times in state prison, is in an upscale, nice neighborhood prowling around, trying to look into the window of a 17-year-old child,” Judd said. “There’s more investigation to do because how did he know there was a 17-year-old child there?”

Pantoja, who was arrested on May 28, was charged with burglary of a dwelling, possession of burglary tools, voyeurism and stalking. He was released from a Polk County jail after posting bond two days later, online records show.

Attempts to reach Pantoja Tuesday were unsuccessful. A woman who identified herself as his wife declined to comment on the accusations. It’s unclear if he’s hired an attorney who could speak on his behalf.

The mother of the teen, meanwhile, said she’s now fearful whenever she’s in the bathroom or when her daughter goes to bed.

Martinez said she saw a man peering into her bathroom window, prompting her to run outside, where she saw a work truck leave the scene. Her neighbors then bought a security camera that caught Pantoja in the act days later, authorities said.

“Being able to see those videos is chilling,” Martinez said, adding that her daughter is still frightened. “You can see there’s a point where he reaches up and pushes on my daughter’s window to see if it’s unlocked, I’m presuming. That is just something that I can’t stop thinking about.”