Heckler charged with breach of the peace ‘after calling Prince Andrew a “sick old man” as he walked behind Queen’s coffin’ will not face court, prosecutors say

A heckler charged with breach of the peace after allegedly calling Prince Andrew ‘a sick old man’ as he walked behind the Queen’s coffin will not face court, prosecutors have said.

The 22-year-old was arrested ‘in connection with a breach of peace on the Royal Mile’, as Andrew, 62, walked in the procession as it made its way from the Palace of Holyroodhouse in Edinburgh to St Giles’ Cathedral on September 12.

The young man was filmed allegedly heckling the royal and seconds later it appeared he had been shoved to the ground by angry mourners, as others in the crowd shouted ‘God Save the King’.

It then showed the man being helped up and pulled away by a police officers, as those grieving the late Queen continued to push him. Footage showed a short scuffle after a protester allegedly heckled Prince  Andrew. In the video, the man is led him away as he appeared to shout ‘disgusting’ and ‘I’ve done nothing wrong’ while in the background people shouted ‘God save the King’ 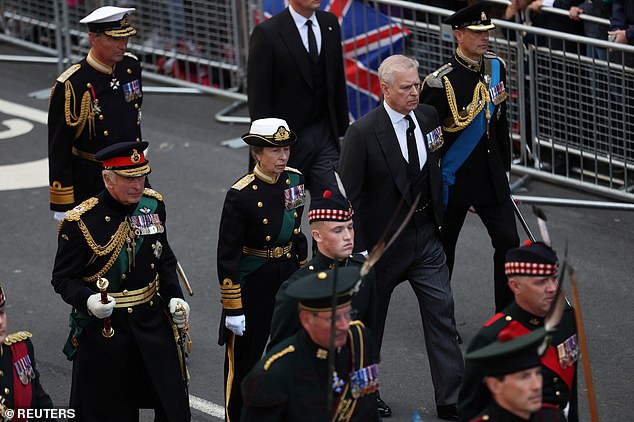 Prince Andrew (third from the left) pictured alongside King Charles III, the Princess Royal and the Earl of Wessex during the ceremonial event in Edinburgh, Scotland on September 12 He was then dragged away from the road he yelled ‘disgusting’ and ‘I’ve done nothing wrong’.

Meanwhile, Prince Andrew, along with his siblings King Charles III, Princess Anne and Prince Edward continued to walk behind the hearse carrying the Queen’s coffin.

The protester was charged with ‘breaching the peace’.

Andrew, a Falklands War veteran, was exiled from public life amid the fallout from his role in the Jeffrey Epstein scandal.

But the Crown Office has said the case has been dealt with ‘by way of an offer of an alternative to prosecution’.

A spokesman said: ‘The procurator fiscal received a report concerning a 22-year-old male in connection with an alleged incident on September 12, 2022.

‘After full and careful consideration of all facts and circumstances, the case was dealt with by way of an offer of an alternative to prosecution.’

Alternatives to prosecution can include warnings, work orders, fines and compensation orders, however the Crown Office said it could not say what alternative was used in this case.

Prosecutors also said no action will be taken at this time against a woman who held an anti-monarchy sign ahead of the accession proclamation of King Charles III in Edinburgh. 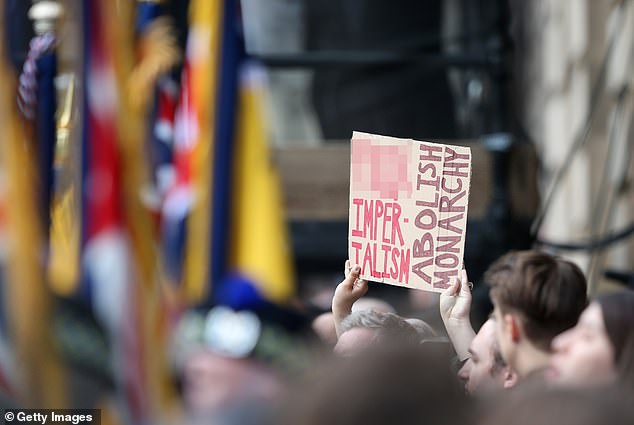 The 22-year-old was arrested ‘in connection with a breach of peace’ outside St Giles’ Cathedral on September 11 for allegedly holding up an anti-monarch placard which read: ‘F*** Imperialism, Abolish Monarchy’.

As police led her away, the crowd who had gathered to hear the Lord Lyon King of Arms, who is responsible for overseeing state ceremonial in Scotland, formally proclaim Charles King, applauded.

One person shouted: ‘Have some respect’.

But the Crown Office has decided that ‘there should be no proceedings taken at this time’ in relation to the woman.

It said in a statement: ‘The procurator fiscal received a report relating to a 22-year-old female and an incident said to have occurred on September 11, 2022.

‘After careful consideration of the facts and circumstances of the case, including the available admissible evidence, the procurator fiscal decided that there should be no proceedings taken at this time.

‘The Crown reserves the right to proceed in the future if it is appropriate and in the public interest to do so.’