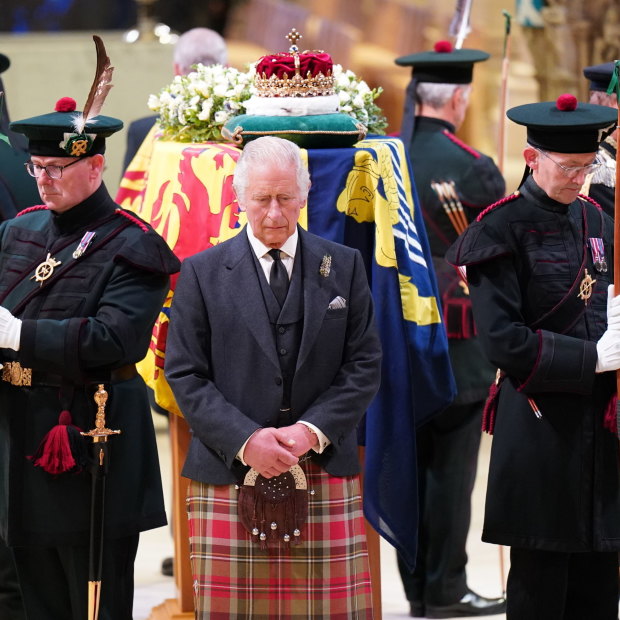 Edinburgh: To near-silence the Queen’s coffin journeyed up Royal Mile. Four siblings, united in grief, walked slowly behind, their faces drawn and grim.

Tens of thousands mourners solemnly watched as King Charles III, dressed in ceremonial military uniform, carried a baton presented to him by the late Queen when he became Field Marshal a decade ago. Beside him strolled sister Anne, the Princess Royal, along with Andrew, the Duke of York and Edward, the Earl of Wessex.

The largest crowds seen since the 96-year-old monarch died last Thursday gathered along the Edinburgh high street and at St Giles’ Cathedral, where thousands more mourners will file past the late Queen’s coffin for nearly 24 hours. 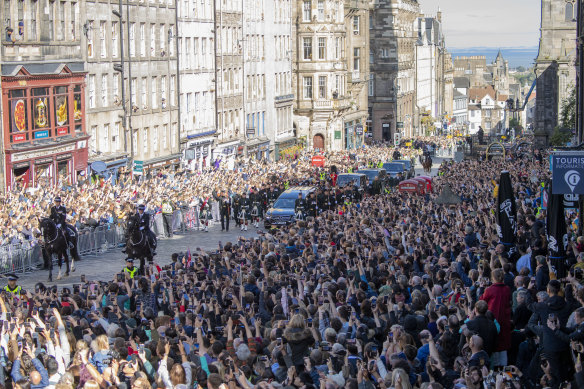 The Queen’s four children followed the procession from Holyroodhouse to St Giles’ Catherdal.Credit:Getty

The monarch and his siblings later returned to the cathedral to stage a vigil to their late mother. They stood, heads bowed with their backs facing the coffin, as mourners walked past. 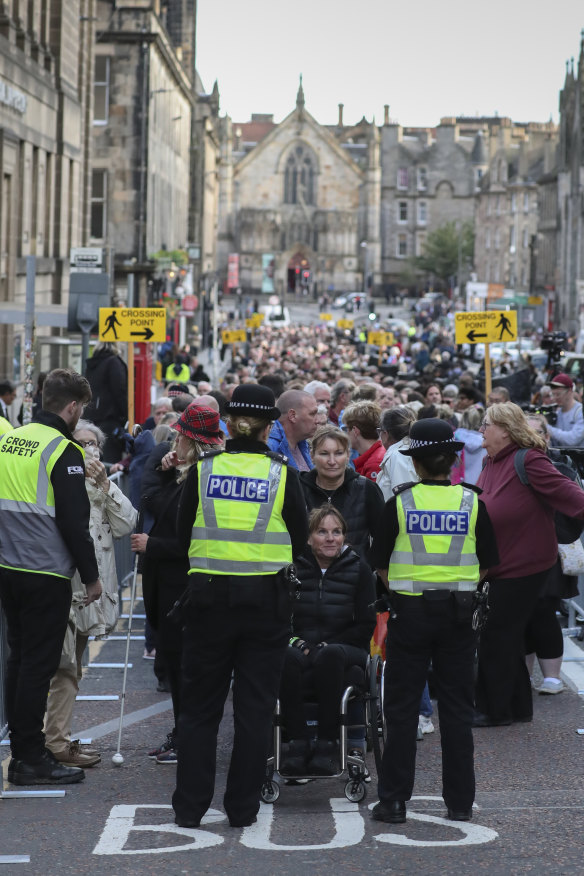 Allison Evans was the first to join the line to inspect the Queen’s coffin.Credit:AP

It has only been performed once – at the funeral of the Queen Mother in 2002 – since it was first carried out in 1936, when King Edward VIII and his brothers Albert, Henry and George stood by the coffin of their late father, King George V.

Some, including Allison Evans from Derbyshire in a wheelchair, had joined the line 7am – almost 12 hours before they were allowed in. The queue for entry stretched more than a mile, from the historic cathedral to the city’s Meadows park.

As the procession neared the cathedral earlier in the day a sea of hands holding phones in the air tried to capture the moment, while a barking dog momentarily put the police horses on edge. A man yelled “God Save the King” as the coffin passed the Canons’ Gait pub. 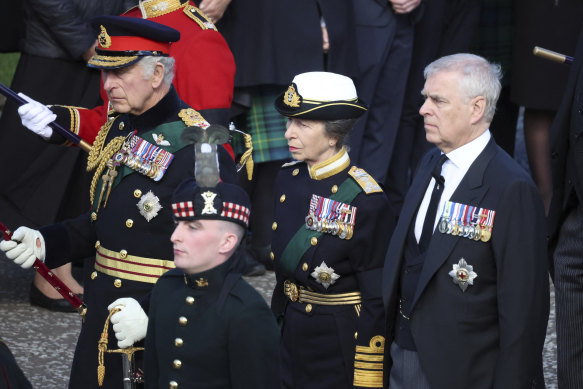 Such was the crowd’s focus, former British prime minister Gordon Brown walked past without anyone raising an eyebrow.

At St Giles’ her coffin, draped with the Royal Standard in Scotland and dressed with a wreath of flowers, was placed on a wooden catafalque – a raised platform – for a service celebrating Elizabeth II’s life and her connection to the country. 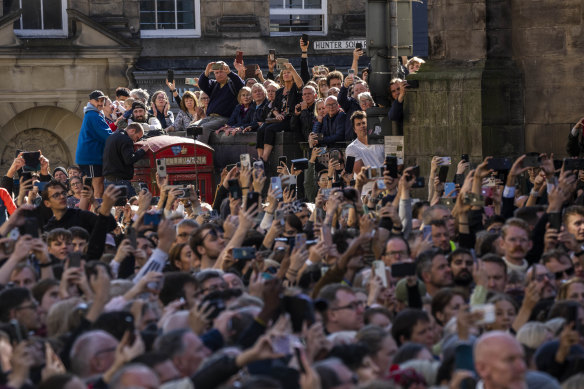 Scots clamour to take pictures and video of the procession up the Royal Mile.Credit:AP

The Reverend Calum MacLeod welcomed the royal family, “representatives of our nation’s life” and “people whose lives were touched by the Queen in so many unforgettable ways”.

“And so we gather to bid Scotland’s farewell to our late monarch, whose life of service to the nation and the world we celebrate. And whose love for Scotland was legendary.”

Only the Duke of York did not wear a military uniform after his fall from grace. Andrew was obliged to end his public duties in 2019 in the aftermath of a disastrous BBC interview about his friendship with the convicted paedophile Jeffrey Epstein. One man in the crowd was taken away by police when he yelled, “you’re a sick old man” during the procession.

The music at the service incorporated European, Anglican and Scottish material and was drawn from composers such as Bach, Purcell and Tallis. The Psalms chosen were among the favourites of the Queen, which her family which had often sung at Crathie Kirk in Balmoral. 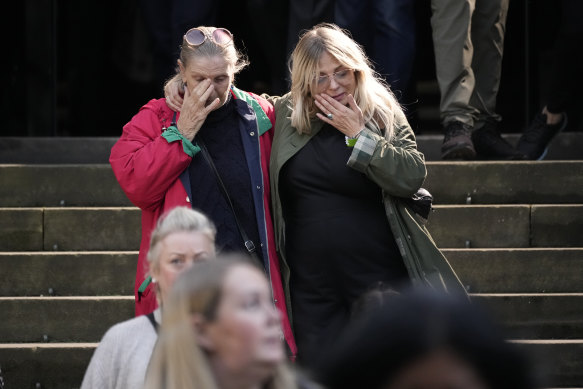 Two women struggle to contain their emotion after filing through the cathedral to see the Queen’s coffin.Credit:Getty 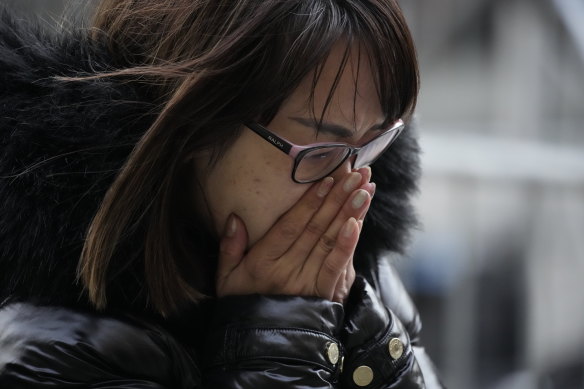 Another emotional mourner after leaving the catheral in central Edinburgh.Credit:Getty 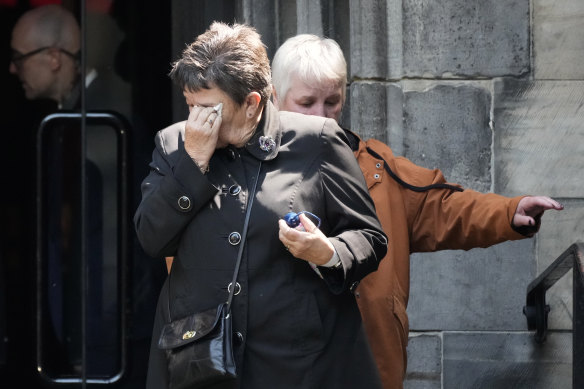 A woman wipes away tears. Credit:Getty

Nicola Sturgeon, the Scottish First Minister and fierce advocate for independence, read Ecclesiastes 3:1-15 from the lectern.

“There is a time for everything, and a season for every activity under the heavens,” she said.

The choir followed with William Byrd’s The Souls of the Righteous Are in the Hand of God.

Psalm 23 – often been sung at wedding and funeral services in Scotland – was performed to the tune of Crimond. It was sung at then Princess Elizabeth’s marriage to Prince Philip in 1947.

Camilla, the Queen Consort, wore a diamond thistle brooch – a nod to the Scottish national flower – in a poignant tribute to her late mother-in-law. 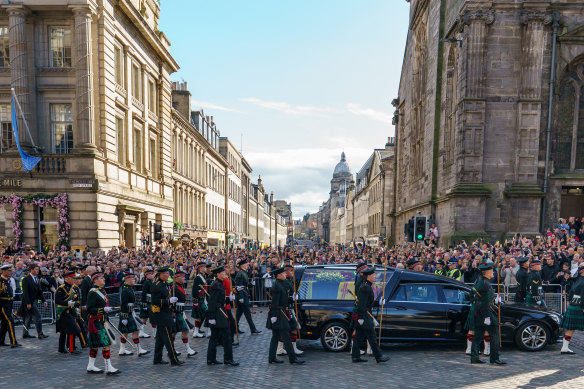 Tens of thousands turned up to watch the procession of the Queen’s coffin. Credit:Getty

Giving the homily, the Right Reverend Dr Iain Greenshields told the congregation the Queen was determined to see her work as a form of service to others, and she maintained that until the end of her life.

“People who were in her company always felt that they were being listened to carefully and attentively and with compassion,” he said.

“She possessed a sharp, intelligent mind with amazing recall, a kindly heart and a gentle sense of humour. She understood the breadth of world affairs and also cared about what happened to all of her people.

“And although sometimes buffeted by events around her, she continued resolutely and cheerfully to fulfil her responsibilities.

“And so today we give thanks not only for the length of her reign but for the qualities she displayed so steadfastly.”

The national anthem, God Save the King, was sung near the end of the service. The King’s wife and siblings could be seen singing as they stood alongside him in front of the coffin.

In a historic address to the Scottish parliament which followed, Charles borrowed the words of the great Scottish poet Robert Burns to describe his mother.

“If I might paraphrase the words of the great Robert Burns, my dear mother was ‘The friend of man, the friend of truth; The friend of Age, and guide of Youth: Few hearts like his with virtue warm’d, Few heads with knowledge so inform’d’.” 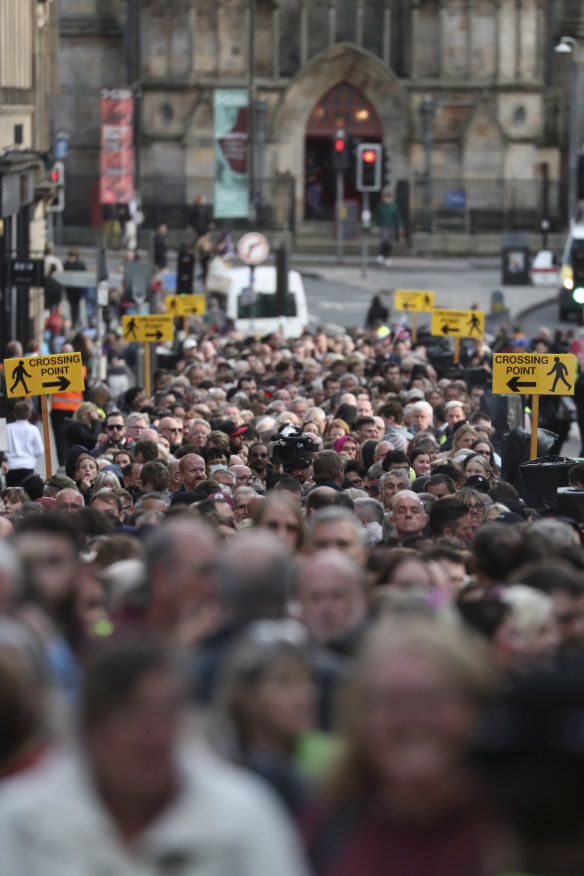 The casket will be flown to London on Wednesday, accompanied on an RAF C17 aircraft by the Princess Royal and her husband Vice Admiral Sir Tim Laurence. It will rest in the Bow Room at Buckingham Palace overnight, before a procession to the lying-in-state at Westminster. 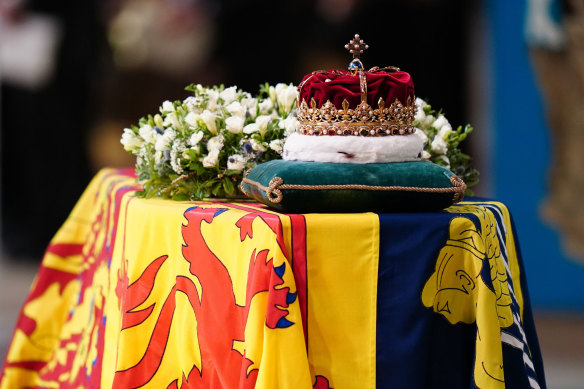 The Crown of Scotland sits atop the coffin of Queen Elizabeth II during a service at St Giles’ Cathedral in Edinburgh.Credit:Getty