A giant crocodile stunned golfers by snatching a barramundi from a nearby lake and tearing it to shreds on the fairway.

Businessmen watched on in shock as the crocodile ate the large fish at the Mirage Country Club in Port Douglas, North Queensland, on Friday.

The two-metre crocodile made the fish ‘explode’ according to golfers who were lining up at the 18th tee when they saw the incident. 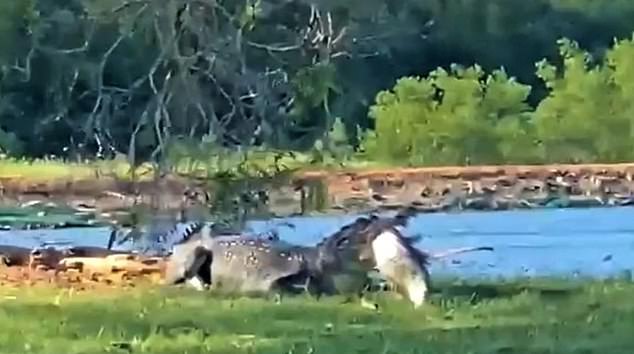 ‘We were eyeing up the tee shot and looked across and were like ‘wow’,’ Golfer Andrew Reeves told the Courier Mail.

A group of 12 organisations were playing during a two-day event designed to support local businesses.

‘It was a fair sized barra and a fair sized croc and then he starts chomping it down and then he just goes ‘whack’ and twists and the whole think exploded, it was incredible,’ said Mr Reeves.

‘And then we all said at the same time, ‘Far North Queensland is just an awesome place’.’

Crocodiles are often seen at the golf course – including a 3.7m one who was removed in 2015 – because of its closeness to estuary Dickson Inlet.

Croc, Giant, Incredible, moment, R.
You may also like: