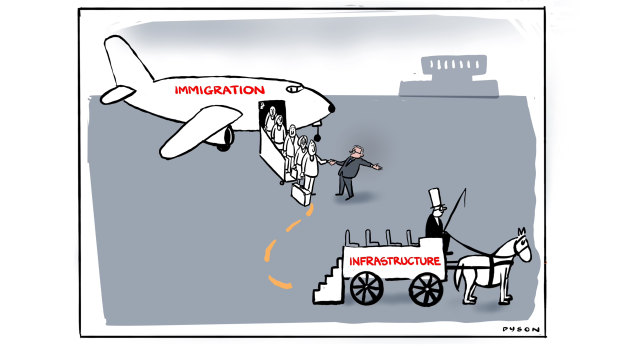 Business Council of Australia chief Jennifer Westacott describes many ways to make the Jobs and Skills Summit summit successful (Comment, 1/9) but forgets about a potential workforce of more than 30,000 people who are already in Australia and would love to work. They are refugees and asylum seekers who, because of the way they entered this country, are on temporary, safe haven and bridging visas.
Many are highly skilled and have already learnt functional English and most have ongoing housing. Were they given permanent visas, they could not only provide for themselves but contribute to the social and economic life of the country that has taken them in.
Helen Pereira, Heidelberg Heights

Reform industrial action laws
One reason real wages fell while many businesses’ profits increased substantially under nine years of Coalition government was because of legislation it passed that made industrial action more difficult to take. Giving unions the ability to have their members take responsible industrial action without the threat of facing the courts should see more money in workers’ pay packets.
Phil Alexander, Eltham

There is a place for the experienced
Bring in the skilled workers and shove those aged workers out the door. It doesn’t matter if the mature are prompt with their arrival to work. It doesn’t matter if they have years of experience. Well it does, they can teach the newbies before they are given a nudge out the door. Without the experienced, mistakes will be repeated. You will find a loss in a precious balance within the community.
Sharyn Bhalla, Ferntree Gully

A clarion call to be rid of carbon
Economist Ross Garnaut’s keynote address at the summit is a clarion call for the nation to decarbonise and seize its renewable superpower opportunity (″⁣Garnaut says Australia could lead on renewables″⁣, 2/9). Australia’s five great advantages are wind and solar, iron ore, critical minerals, land, and expertise. We need to add investment dollars, Indigenous support and increased taxes.
We must make it happen now, for everyone’s sake.
Barbara Fraser, Burwood

Adjust the cuts
Anthony Albanese must put the country’s interests before politics. If he isn’t willing to cancel the tax cuts, perhaps he could make adjustments to allow modest income earners and women to benefit and reduce the cost to the country. This could reduce the country’s staggering debt more quickly or be used to support other vital, high-priority initiatives. When circumstances change, so must leaders.
Anne Heath Mennell, Tenby Point

Scare campaign
Innes Willox, head of the Australian Industry Group, says multi-employer agreements must be rejected because ″⁣a clear red line for industry is the potential for unions to engage in industrial action in pursuit of multi-party bargaining claims″⁣ (The Age, 2/9).
Such noisy protestations reveal self-interest mixed with ill-informed nonsense.
The self-interest is clear. Employers benefited hugely from the weakening of multi-employer bargaining in the 1990s and 2000s (remember the abolition of state awards through John Howard’s WorkChoices). They don’t want to give anything back, notwithstanding collapsing real wages over the past decade.
And is the spectre of industrial action plausible? Historically no, but it could recur! The best predictor of a strike wave is an increase in inflation. This happened after both world wars and in the 1970s.
Since enterprise bargaining was adopted in 1991 strikes have become statistically almost invisible because of changes to the workforce and falling union membership. There is very little factual basis at all for the employers’ scaremongering.
Malcolm Rimmer, Clifton Hill

Small price to pay
Peter Hartcher’s summary of Ross Garnaut’s address to the jobs summit (2/9) highlights a fact that many forget when they cite that Australia’s contribution to global emissions is, in percentage terms, quite small. Garnaut rightly points out that exports from Australia can have a big impact globally. The coal, oil and gas we export produces huge emissions when it is refined and used overseas.
Replacing these high-emitting exports with zero-emission goods and services can help transform the world.
Forgoing short-term profits from the presently inflated fossil fuel market is a small price to pay when such action will ensure the liveability of our world for future generations.
Graeme Lechte, Brunswick West

Winning is everything
I found George Brandis’ comment (29/8) chilling. At no point did he acknowledge the important issues confronting Australians, it was all about tactics to win government, no hat tip to any ideas and policies needed to justify a return to a Coalition government.
Lindsay Chatterton, Queenscliff

Got it covered
It was pleasing to see that the Catholic Church had the wealth to buy the Catholic school from the Catholic order that had to sell the school to pay victims of sexual abuse under its care (The Age, 2/9). No one need be concerned that this church cannot afford to make appropriate restitution.
Julian Guy, Mount Eliza

Certified equality
If you really want gender pay equality, then you have to rule that industries requiring the same qualification pay the same wage. This should immediately lead to an increase in the wages of aged care workers as they are matched to men with equal certifications, ie, a Certificate 4 in all industries earns the same payment.
Aileen Hewat, East Melbourne

Nursing experience
I agree with Christine Baker (Letters, 1/9). All patients and new graduate nurses need the care and mentoring of experienced nurses to maintain the best standard of care.
Health professionals and especially nurses have relied heavily on the learning imparted by the experienced nurse to the junior nurse. Indeed creating a nurse roster is determined by the nurse experience mix. All rostered shifts must have a mix of experience with novice.
Funding by government must be increased to retain the experienced nurse. Better remuneration and better working conditions is needed to keep the senior nurse in the workplace.
Kath Watty, recently retired
oncology nurse, Burnley

Paved paradise
Cecily Falkingham (Letters, 2/9) suggests to “seek your nearest patch of bushland and revel in nature, you won’t regret it”. Those nearest the Albert Park reserve should regret the clearance of trees and grasslands for the construction of the pit buildings and the asphalt track for the annual F1 grand prix. It’s not until the park is empty that the trees are missed.
Geoff Gowers, Merricks North

Break the promise
Anthony Albanese should abandon the $243 billion stage three tax cuts that will flow to the nation’s highest-paid workers. This view is held by most economists and even some members of the opposition. The tax cuts were made when we had less debt and, in the economic climate, are unsustainable. The PM’s main concern is with breaking an election promise and being wedged by Peter Dutton. On the eve of the 2013 election, Tony Abbott promised no cuts to education, health, the ABC, SBS, and no changes to pensions. He not only broke these promises but many more. The Coalition went on to win in 2013, 2016 and 2019. Clearly, breaking one election promise does not necessarily guarantee defeat at the next election. Albanese should act in the national interest and renounce the tax cuts.
Ray Armstrong,
Tweed Heads South, NSW

The right rebuke
Foreign Minister Penny Wong should be commended for making a trip to East Timor to publicly rebuke President Jose Ramos Horta for using the media to pressure Australia over the terms of a massive potential gas project in the East Timor Sea.
Again Scott Morrison neglected such important matters while in office leaving China the opportunity to control the region with money politics.
Peng Ee, Castle Cove, NSW

The evidence is in
Catastrophic drought and wildfires across Europe, North America and China; more than 30 million displaced by floods in Pakistan; not to mention the disasters in Australia in the past three years.
Are there still any climate change deniers? Or is it time for global citizens and governments to get on the same page and accept that rapid and radical change of our destructive 19th and 20th century habits are critical to human survival? Because if we don’t – and very, very soon – there will be even less time to ameliorate the destruction we’ve wreaked on our precious planet.
Remember that there is no Planet B when you next buy a car or household appliance, build a house – or vote.
Caroline Leslie, Hawthorn

Little understanding
In failing to see that many of her actions actively militate against a successful outcome for the Climate Change Bill 2022, Resources Minister Madeleine King is exhibiting a worrying form of climate-change denialism or lack of understanding. Not only has she recently released 10 offshore sites for new oil and gas projects but has lent her support for the Beetaloo, Narrabri and Woodside-Scarborough gas projects. There is credible evidence that the latter project alone would make Labor’s 43 per cent 2030 target difficult if not impossible to achieve. The totality of King’s approvals is not compatible with the goal of limiting global temperature rise to 1.5 degrees this century while noting that this limitation itself is unlikely to be achieved.
Ian Bayly, Upwey

What’s the problem?
What’s confusing and contradictory about wearing masks? On planes, you won’t be required to wear them. On Victorian public transport you are still required to. LNP politicians seem unable to grasp this.
John Cain, McCrae

Footy
If the AFL is to avoid the premiership being decided by a video score review they do not need to move the goal posts but perhaps make them longer.
Mark Cherny, Caulfield

If the football going over or close to over the post is a constant problem for the AFL, can it just make the posts 10 metres taller? It’s too important to teams to leave it to cameras 100 metres away.
Neale Meagher, Malvern

The workforce
Anyone who thinks true wage justice can be achieved without significant strikes is living in fantasyland.
William Puls, Mentone

Just as surely as night follows day, jibes about a ″⁣talkfest″⁣ turn into shrieks about a ″⁣strikefest″⁣.
Bernd Rieve, Brighton

John Howard broke his promise not to introduce a GST. The GST is now viewed as one of his few positive achievements. A lesson for Anthony Albanese in relation to tax cuts?
Ralph Frank, Malvern East

Who would have thought WorkChoices would lead to wage stagnation?
Barbara Lynch, South Yarra

Golf
So Cameron Smith thinks the LIV rankings ban is unfair (2/9). Perhaps he can console himself with a beer from his solid gold fridge.
Mark Morrison, Kew

Furthermore
I paid for my coffee and was thanked with “Amazing”. I hadn’t performed a back flip or pulled a rabbit from my non-existent hat, but I’ll take it.
Bryan Fraser, St Kilda West