When Sharlette Johnson was just seven, her dad signed her up for her first junior rodeo competition.

Nine years later, she was ready to take her place at Australia’s richest rodeo competition, the Mt Isa Mines Rodeo, which was held at the weekend. 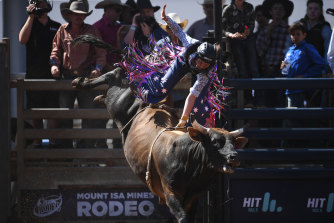 16-year-old Sharlette Johnson is the only woman to compete in the junior bull ride competition at Mt Isa Rodeo on the weekend.Credit:Getty Images

What possesses a young woman still at school to ride a bull? The adrenaline rush.

“When the chute opens, it’s really fast and you don’t have much time to think about anything,” Sharlette said. “You have a lot of nerves that run through you at the same time, like a tingly feeling in your belly. It’s really fast in general and a lot of fun.”

Sharlette, from Julia Creek near Mt Isa, was among 659 competitors vying for $230,000 in prizemoney. Troy Wilkinson, a 30-year-old from Upper Horton, north of Tamworth, was crowned the open bull ride champion in his 10th year of competing. 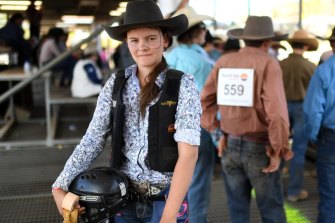 While she was among 30 entrants in the junior bull ride, she also contested the junior steer ride. There were also competitions in rope and tie, barrel racing and breakaway roping.

Safety – both for the rider and the animals – is taken seriously at the rodeo. Sharlette says she has had “a few minor stomp-ons but nothing too serious yet, thankfully”. She wears a vest, head protection and mouth guard. “And obviously your bullfighters are there for some extra safety.”

Between her studies, Sharlette practises on weekends and “occasionally through the week”.

She is planning to return next year and “I intend to do it for as long as I possibly can”.