More migrants have arrived in the UK today after surviving the shivering cold while crossing the English Channel in small boats through freezing fog before being rescued by the RNLI.

An RNLI lifeboat brought one group of Channel migrants ashore at Dungeness, Kent as temperatures hovered at around freezing earlier today.

The arrivals to England were given blankets, socks, flip flops and food by Care4Calais charity volunteers who had turned out to give them support.

The migrants were visibly cold and shivering when they landed on the shore after crossing the Channel in sub-zero temperatures dressed in bright orange ponchos to protect them from the elements. 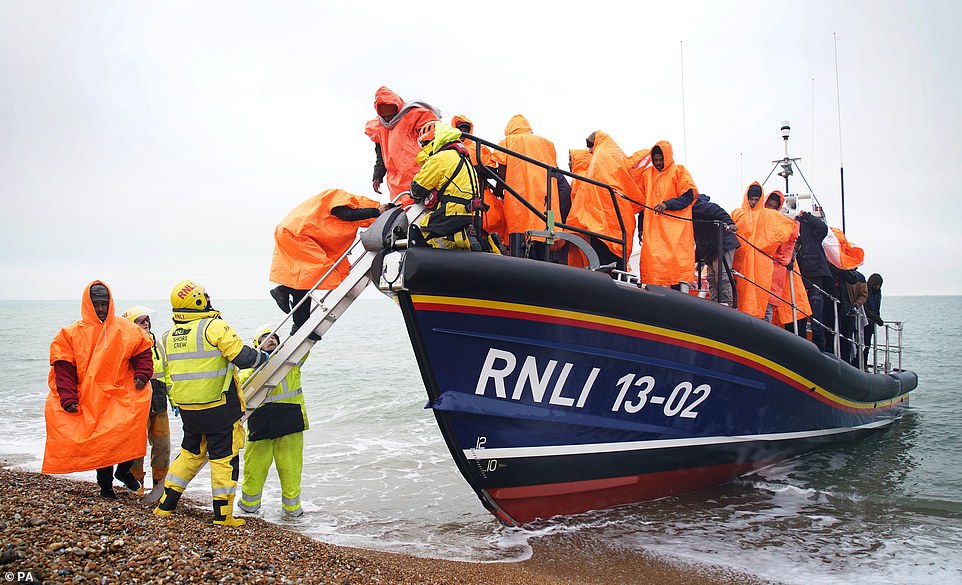 A group migrants are brought in to Dungeness, Kent, after being rescued by the RNLI following a small boat incident in the English Channel this morning 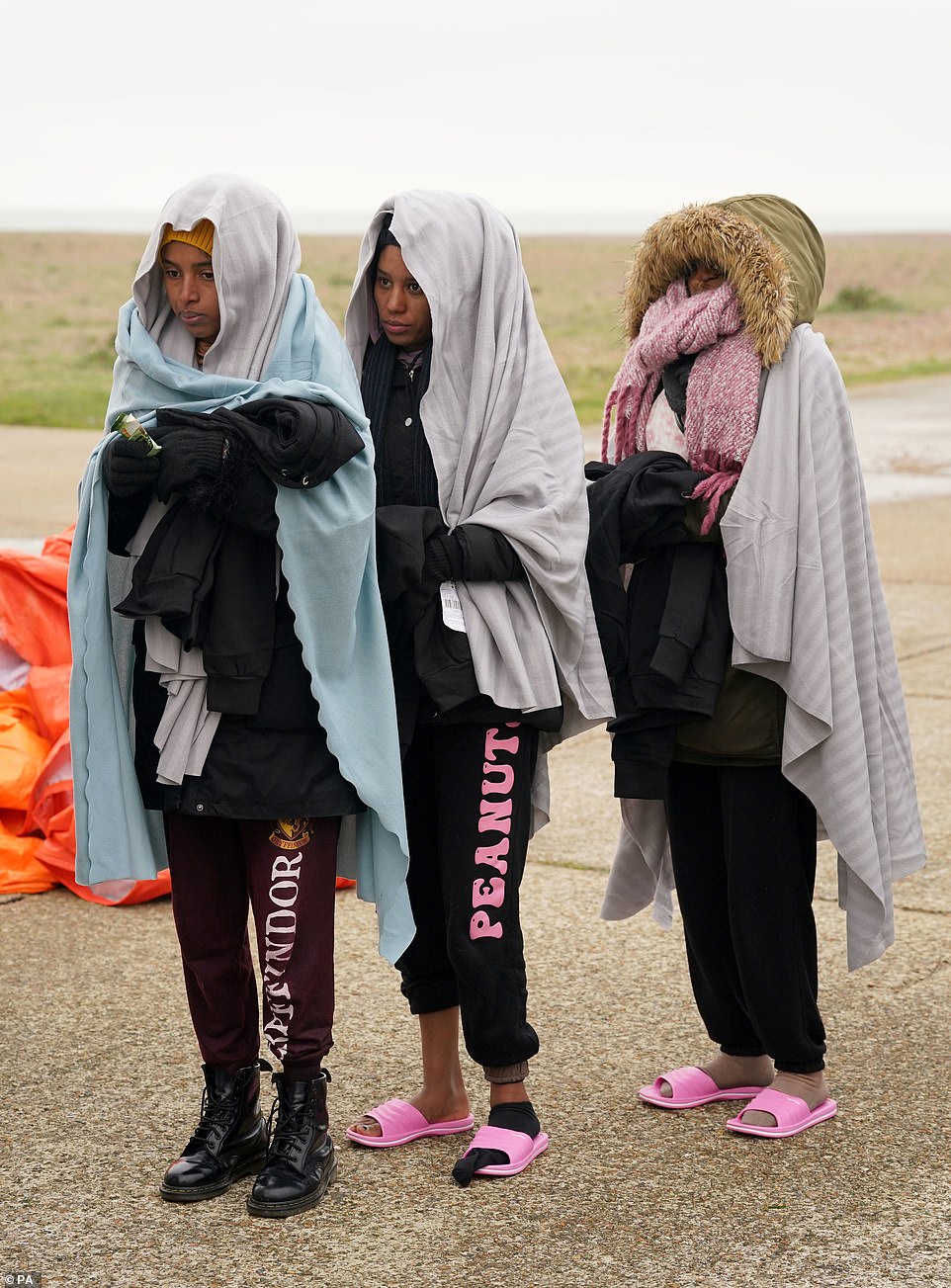 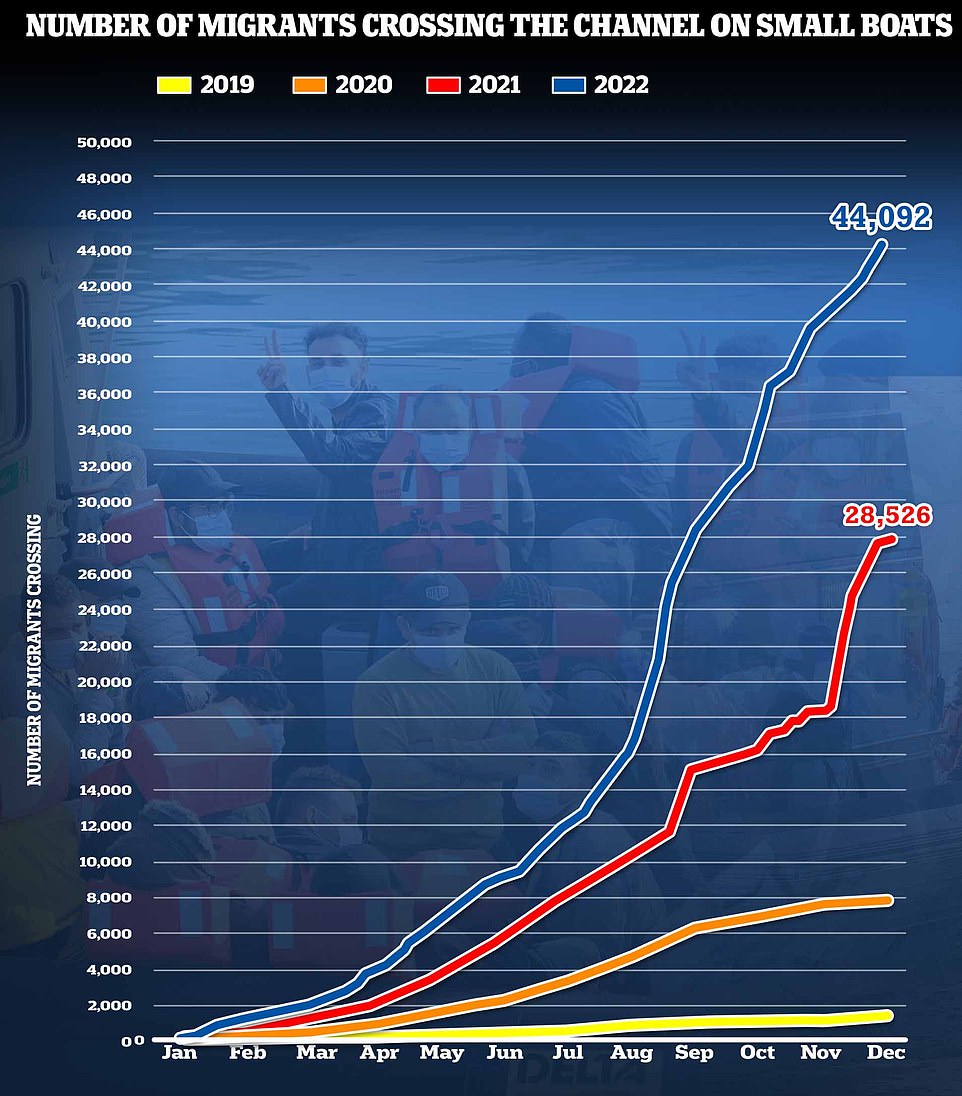 The number of migrants crossing the Channel on small boats this year is now 44,092 – not including those arriving today 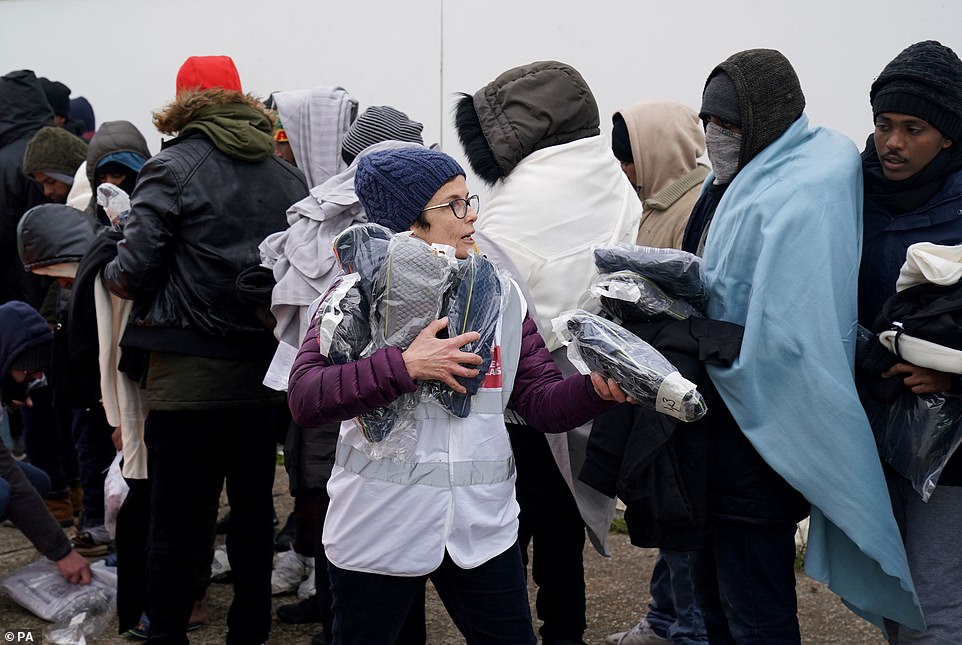 Care4Calais charity volunteers who had turned out to give support to the migrants. Pictured: A volunteer handing the arrivals pairs of flip flops 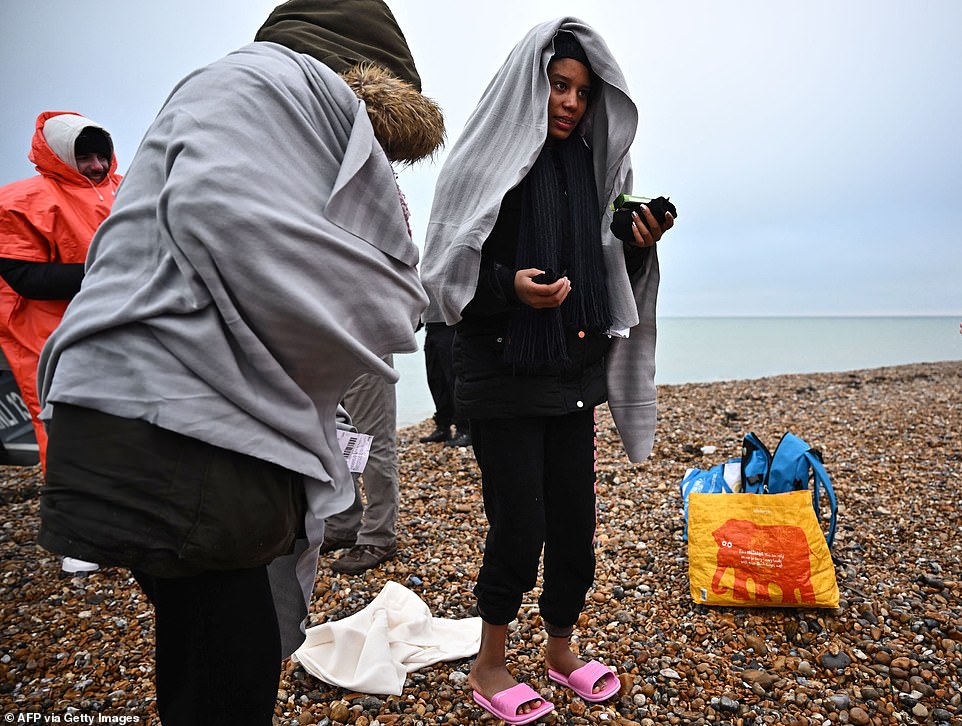 The group of around a couple of dozen migrants were processed by security staff working for Interforce.

Other boats are believed to have been brought into Dover in the first arrivals by small boats since December 1 when 166 arrived.

Total arrivals by small boats for the year stand at 44,092 not including those arriving today, according to Ministry of defence figures.

This comes as the Archbishop of Canterbury today launched another attack on the government over its ‘cruel’ immigration policy today as he blasted ‘harmful rhetoric’ against migrants crossing the Channel in small boats.

Justin Welby rebuked the government in a House of Lords speech over its treatment of migrants and asylum seekers.

He lambasted Prime Minister Rishi Sunak and Home Secretary Suella Braverman as he warned against ‘harmful rhetoric’ that treats those arriving in the UK as ‘invaders’ – as the Home Secretary did last month. 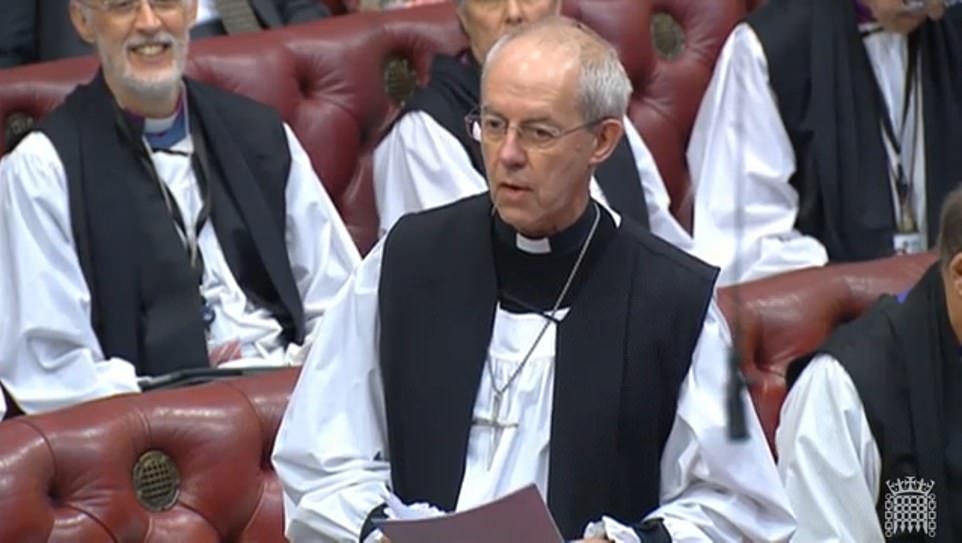 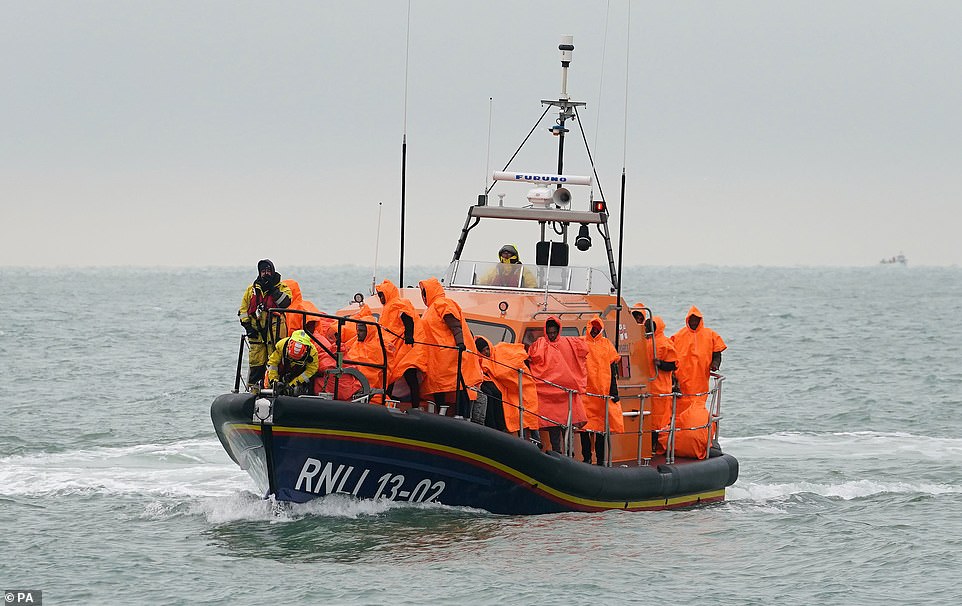 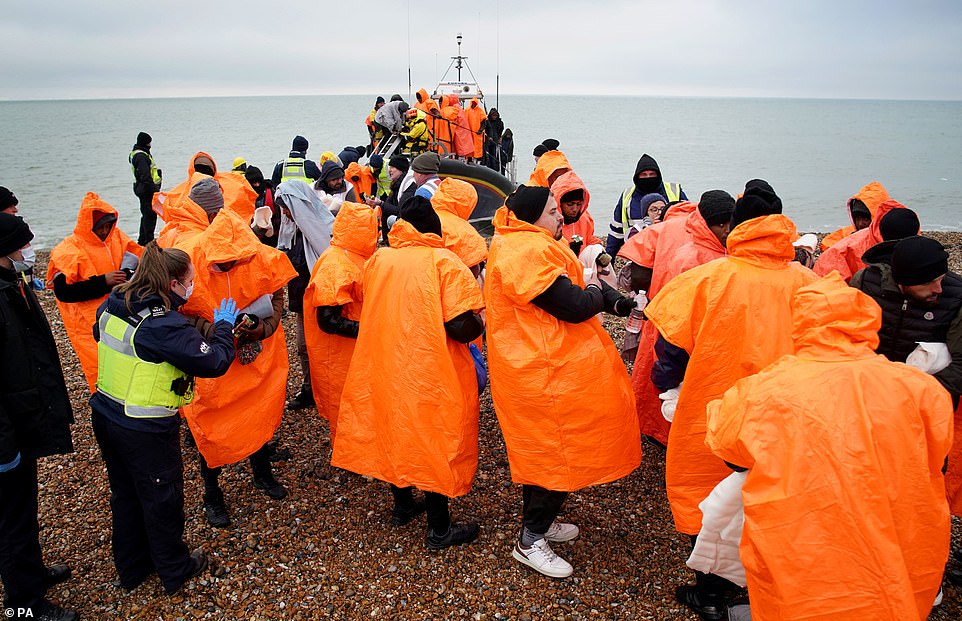 Upon disembarking from the lifeboat, the group were greeted by charity workers and security staff 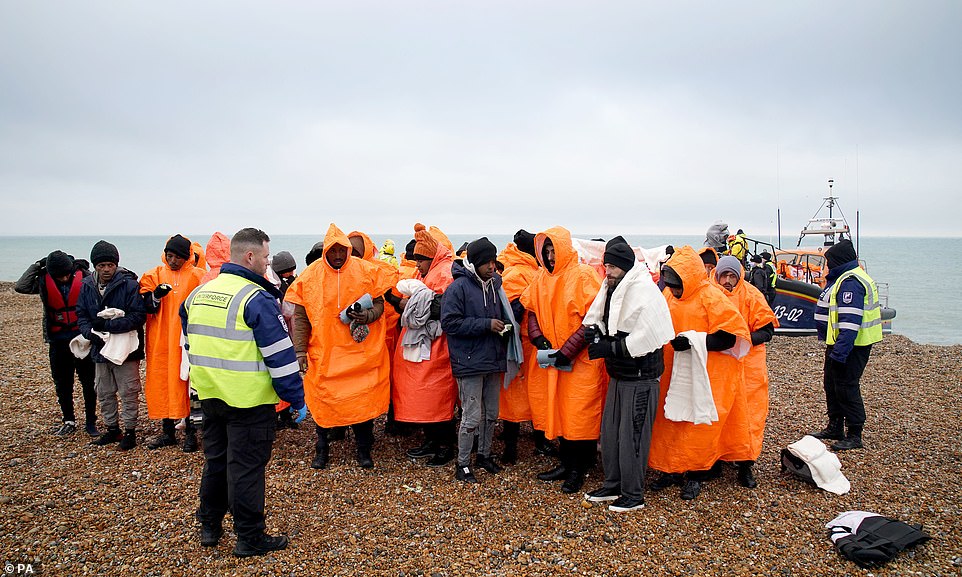 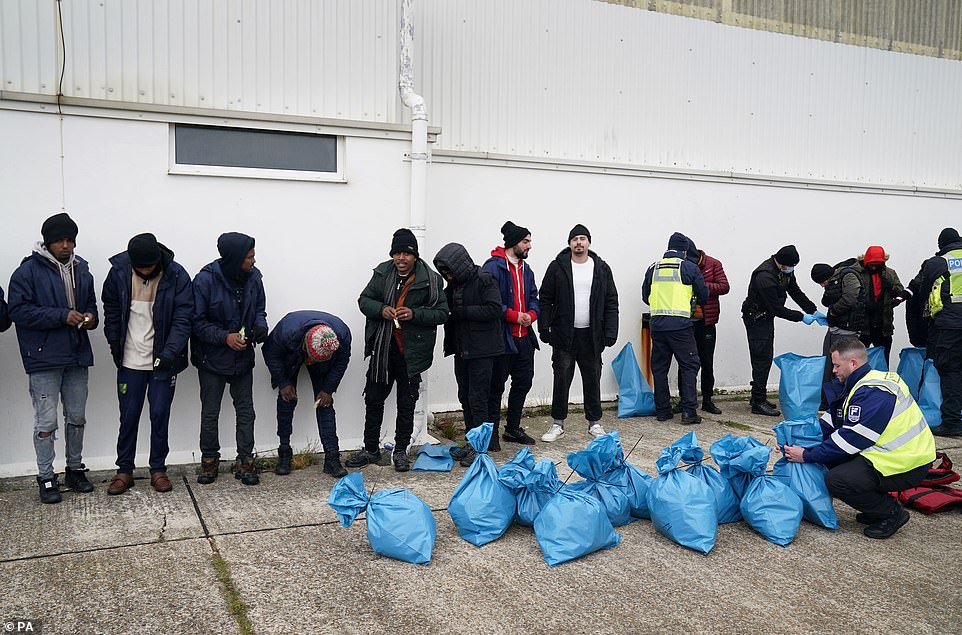 The Archbishop also hit out at the Government’s controversial plan to deport migrants to Rwanda for processing, arguing the stalled scheme is destined to be a ‘failure’.

Since taking office, Mr Sunak has pledged tough action to tackle cross-Channel migration while Ms Braverman has faced repeated criticism for her language to describe migrants.

The Archbishop of Canterbury, who hosts a Lords debate every December, told peers that while the UK ‘cannot take everyone’, the country needs a system ‘which balances effective, accurate and clear control with compassion and dignity, a system which is based in our history and proper moral responsibilities’.

He said: ‘When migrants arrive here, our system is grossly wasteful – in both human and financial terms. Control has become cruelty. Staggering inefficiencies by successive governments trap people in limbo – at incredible expense – in the system for years, unable to build a life or to contribute to society.’ 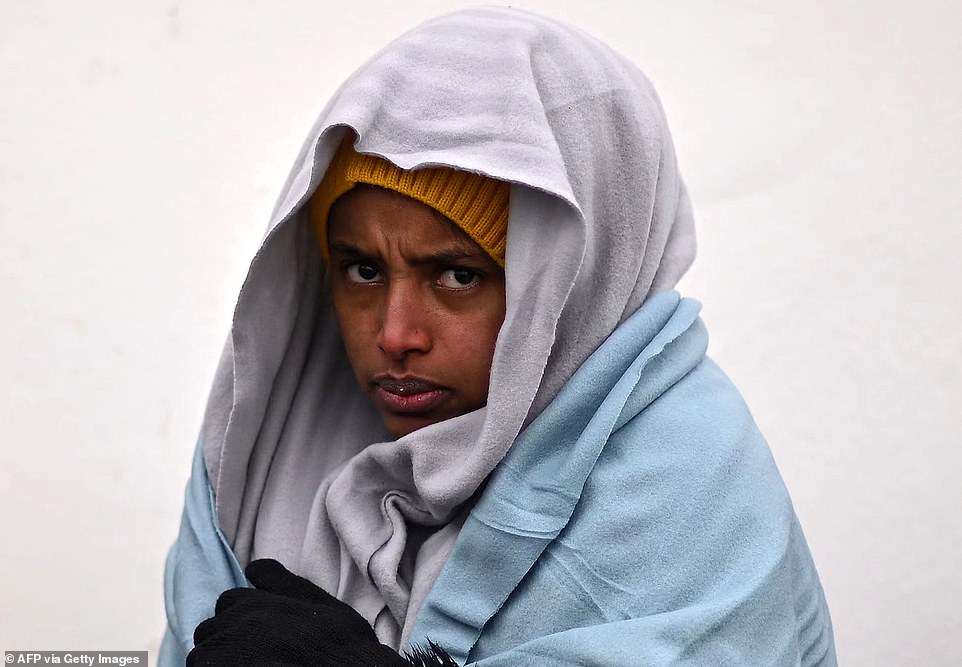 A migrant, picked up at sea by an RNLI lifeboat whilst attempting to cross the English Channel, stands wrapped in donated blankets as they wait to board a coach to a processing facility, at Dungeness 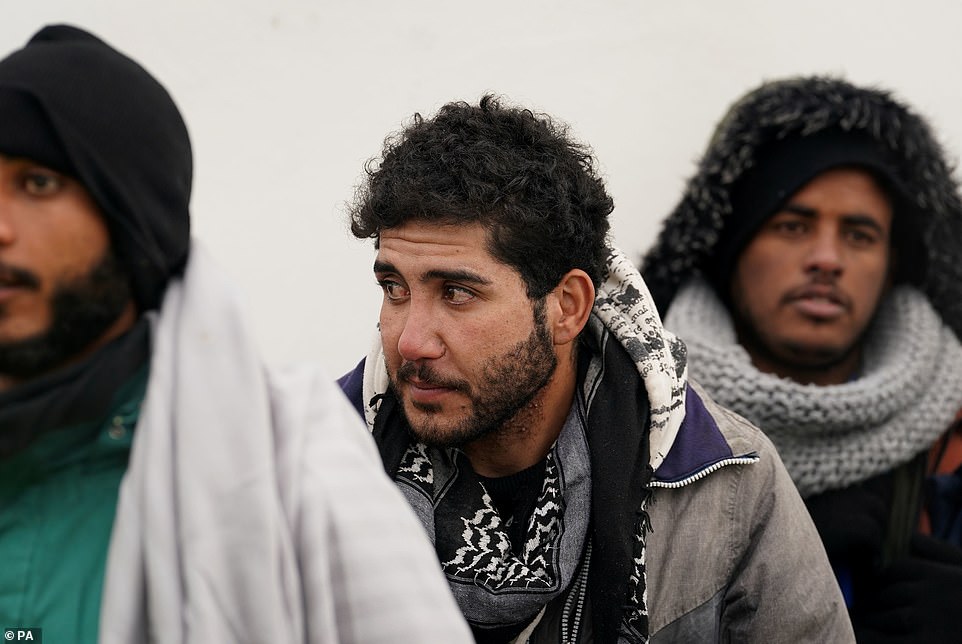 People who landed on the shores of Dungeness, Kent today, wrapped up warmly after surviving the freezing weather 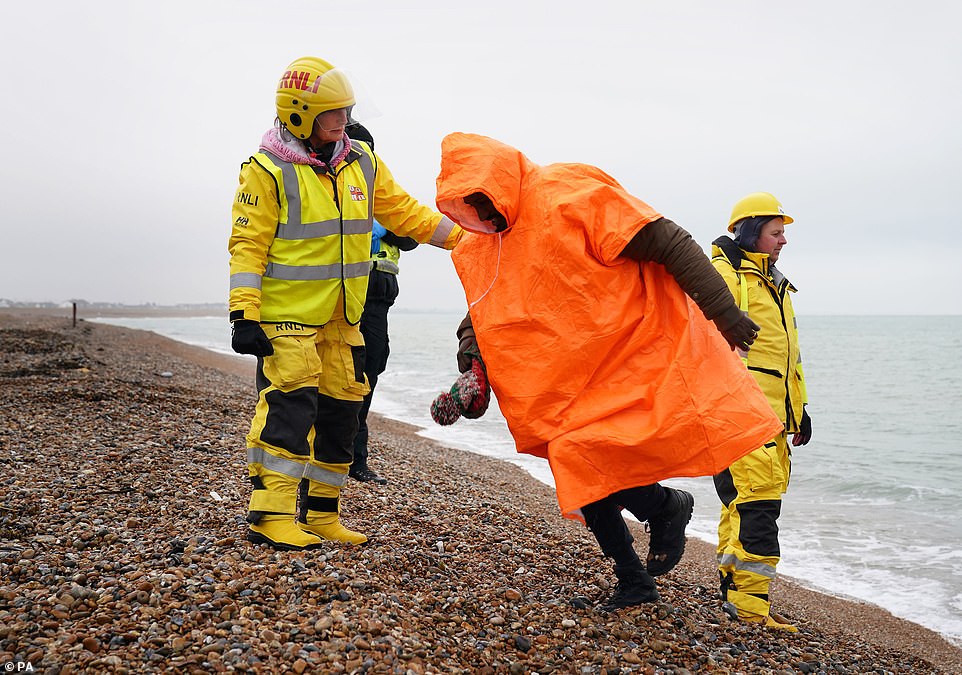 Mr Welby, who heads the Church of England, told peers that he is not only addressing the current Government but a ‘decades-long downward slide’ by successive administrations.

He said: ‘When we fail to challenge the harmful rhetoric that refugees are the cause of this country’s ills, that they should be treated as problems not people, invaders to be tackled and deterred, we deny the essential value and dignity of our fellow human beings.

‘The right to seek asylum, and the duty of the global community to protect refugees, has been politically degraded in this country when it should be a positive and a source of pride. I am not only addressing the Government front bench here. This has been a decades-long downward slide over successive Labour, Conservative and coalition governments.’ 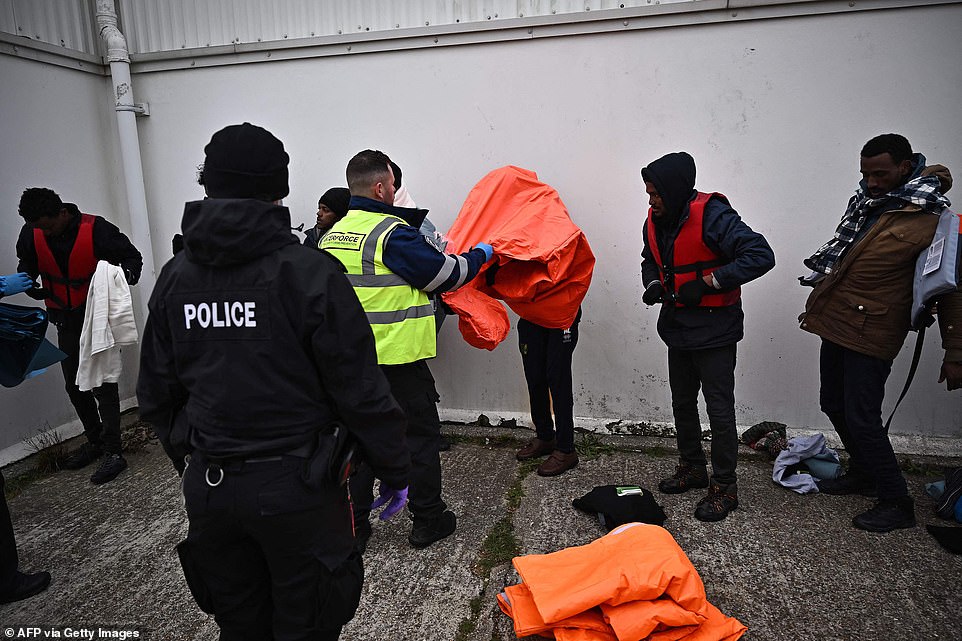 Lord Green of Deddington, the founding president of MigrantWatch UK, argued the UK needs a new legal framework for dealing with refugees, hinting the country could give 12 months’ notice to leaving the UN’s refugee protocol.

He said: ‘Suggestions from the asylum lobby, if I can call them that, that we establish safe and legal routes may be useful as soundbites but they are simply unrealistic.

‘Applications would have to be made in some third country at an application centre, presumably run by the British Government. Surely it’s absolutely clear that such a facility would be immediately overwhelmed by applications and any host government would see this immediately and they would see that they would be left holding the baby, responsible for the people we rejected, and they’re just not going to go down that route, and of course none of them have.

‘Meanwhile, our Government, of course, are in real difficulty; nearly 60% of the public think they have lost control of our borders and there’s something in that, 84% think they are handling immigration badly yet much of the national conversation simply does not reflect the reality of public opinion on this issue.

‘The fundamental issue is that the authority of our Government is being blatantly undermined; the Government is tied up in knots by the current framework of law, so it’s perhaps time that framework was examined.’

He added: ‘It is important to note at this point that both the refugee convention and the UN protocol provide for signatories to withdraw at 12 months’ notice.’

In his maiden speech in the House of Lords today, the Bishop of Leicester said he fears ‘we offer little welcome’ to refugees, who ‘have suffered trauma, terror, abuse and hardship on their journey’.

He said: ‘They may have a roof over their heads but they are not given even the most basic means of living as human beings.

‘The freedom to make even small decisions like what to eat, the independence from having enough money to buy essentials for oneself.

‘The stable connections to a community that offer a sense of belonging and support. At the drop of a hat they can find themselves relocated to another part of the UK or deported forcibly, returning to a place they were so desperate to leave.

‘In denying refugees and asylum seekers their agency, their dignity, and their need for creativity and community, it is not only them we dehumanise, it is ourselves as well.

‘When we are possessed by fear of the other, fear of losing control over our borders, fear of what refugees show us of the fragility of human structures and ways of life, we are lesser versions of ourselves.’

The Archbishop of York, the Rt Reverend Stephen Cottrell, criticised the UK’s asylum system saying it ‘doesn’t give people the dignity, safety and agency that their humanity deserves’.

‘Dehumanising language just promotes fear. A threat of destitution is being used as a deterrent and children are treated as if they are adults,’ he told the House of Lords.