Follow
Home » World News » Mikhail Gorbachev, mourned in the West, gets a frosty goodbye in Russia

Mikhail Gorbachev, mourned in the West, gets a frosty goodbye in Russia

LONDON — Mikhail Gorbachev’s death is being mourned by the United States and its allies Wednesday as the loss of a champion of freedom who helped end the Cold War. But his legacy is very different at home, with many viewing him as the man responsible for the collapse of the then-Soviet Union — and the loss of global status and economic security that followed.

Gorbachev, 91, passed away in Moscow on Tuesday at a time when his legacy of reconciliation with the West and domestic reform has been left in tatters in the wake of Russian President Vladimir Putin’s war in Ukraine — or what the Kremlin insists on calling its “special military operation.”

Putin’s rule is widely seen as aimed at reversing the trends initiated by Gorbachev and restoring Moscow’s power and pride at the expense of peace in Europe. 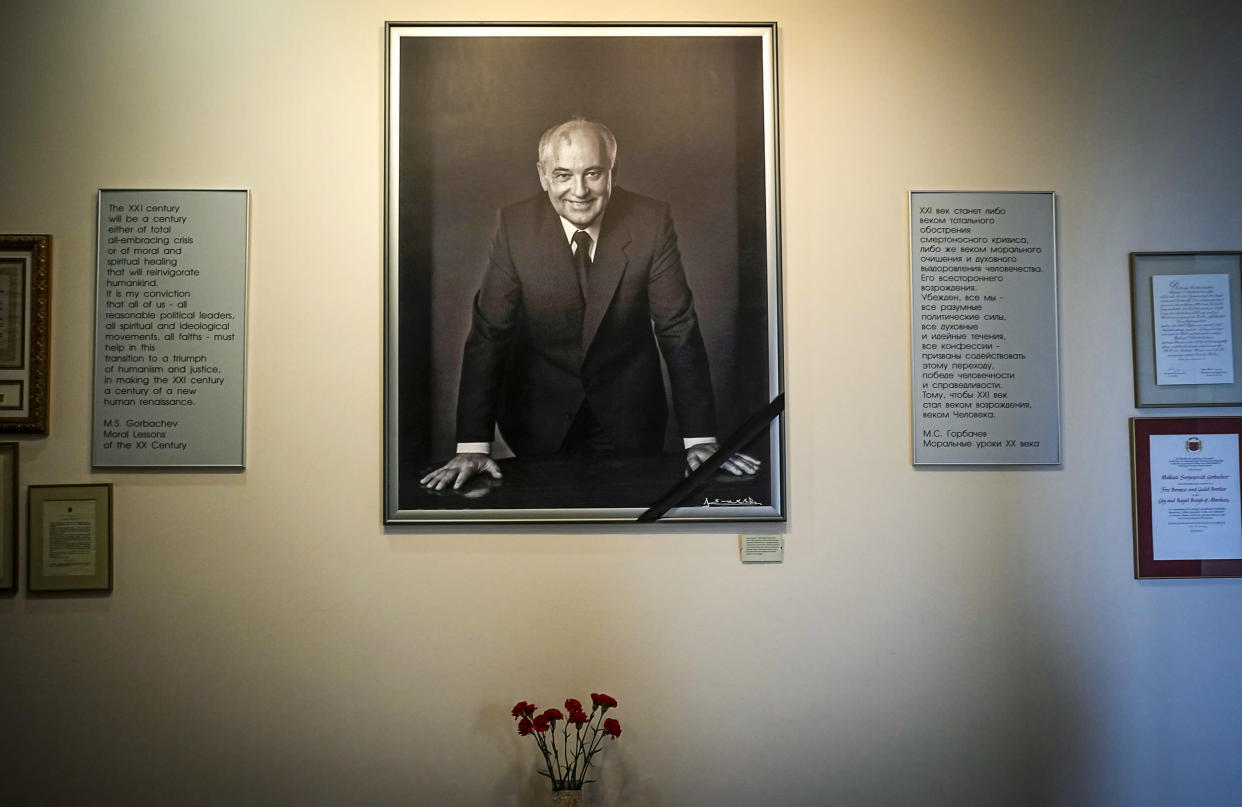 From Washington to Brussels, Gorbachev was widely acclaimed after the news of his death.

President Joe Biden called the last Soviet leader, who was often referred to as “Gorbi” in the West, “a man of remarkable vision.” United Nations Secretary-General António Guterres, said he was “a tireless advocate for peace.”

The head of NATO, whose expansion the Kremlin considers an existential threat to Russia, said Wednesday that Gorbachev’s historic reforms led to the “possibility of a partnership” between Moscow and the military alliance, among other things. “His vision of a better world remains an example,” Secretary General Jens Stoltenberg said.

But, the reaction in Moscow has been markedly different.

Putin took until Wednesday morning to express his “deep condolences” in a telegram to Gorbachev’s family, acknowledging his status as “a politician and statesman who had a huge impact on the course of world history.”

He “realized that reforms were necessary and tried to offer his solutions to the acute problems,” Putin said. 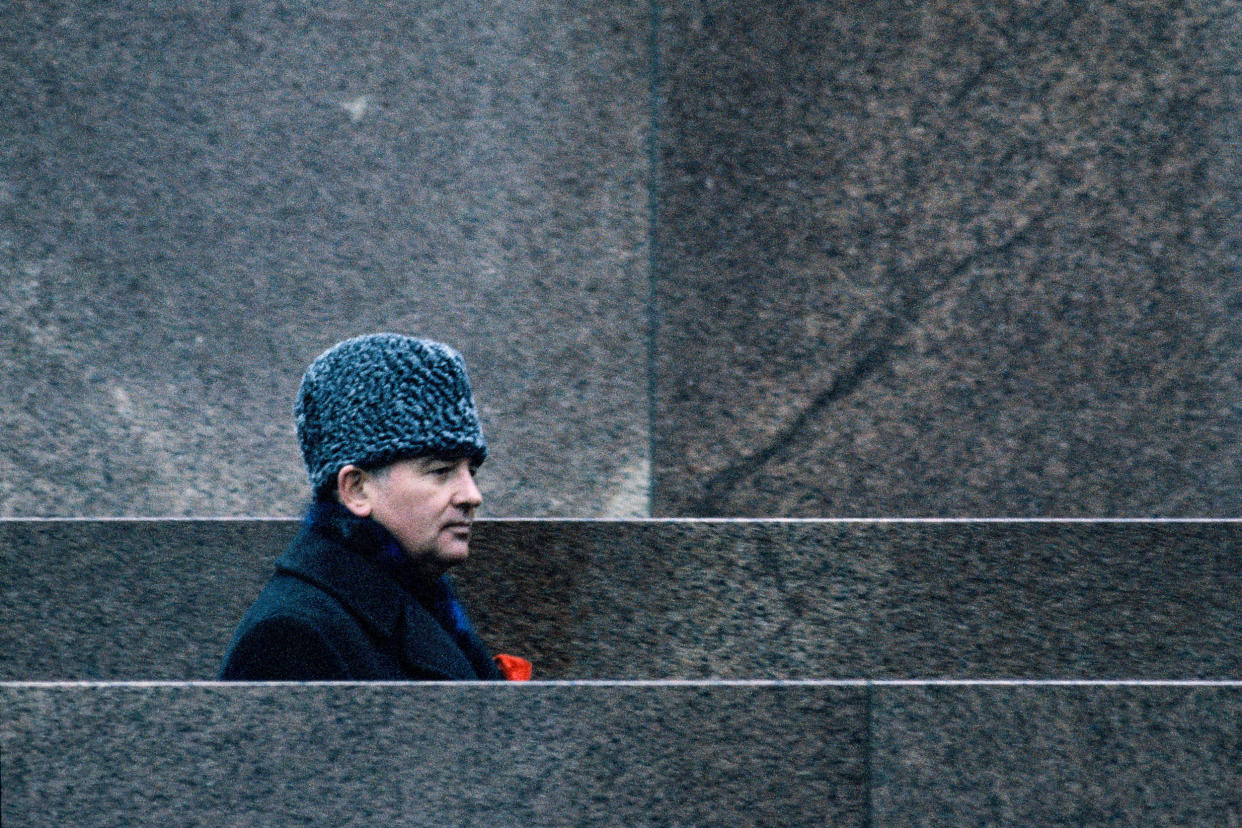 Gorbachev was critical of some of Putin’s policies in his later years and lamented the “militarization of world politics.” Putin, meanwhile, has called the implosion of the Soviet Union, for which many in Russia hold Gorbachev responsible, “the greatest geopolitical catastrophe of the century.”

While Putin was reserved in his assessment, Kremlin spokesman Dmitry Peskov argued that Gorbachev’s “romantic” quest for peace between Moscow and the West was a pipe dream, according to the state news agency Tass.

“This romanticism did not materialize. There was no romantic period or honeymoon,” Peskov was quoted as saying. “The bloodthirstiness of our opponents has shown itself.”

Gorbachev pursued arms control treaties and won the Nobel Peace Prize in 1990 for helping to end the Cold War, while championing economic restructuring and greater openness at home through his policies of “glasnost” or openness and “perestroika” or restructuring.

But those reforms ultimately helped weaken the USSR to the point of collapse, and it was the way he handled those events which has left many in Russia and post-Soviet countries bitter. 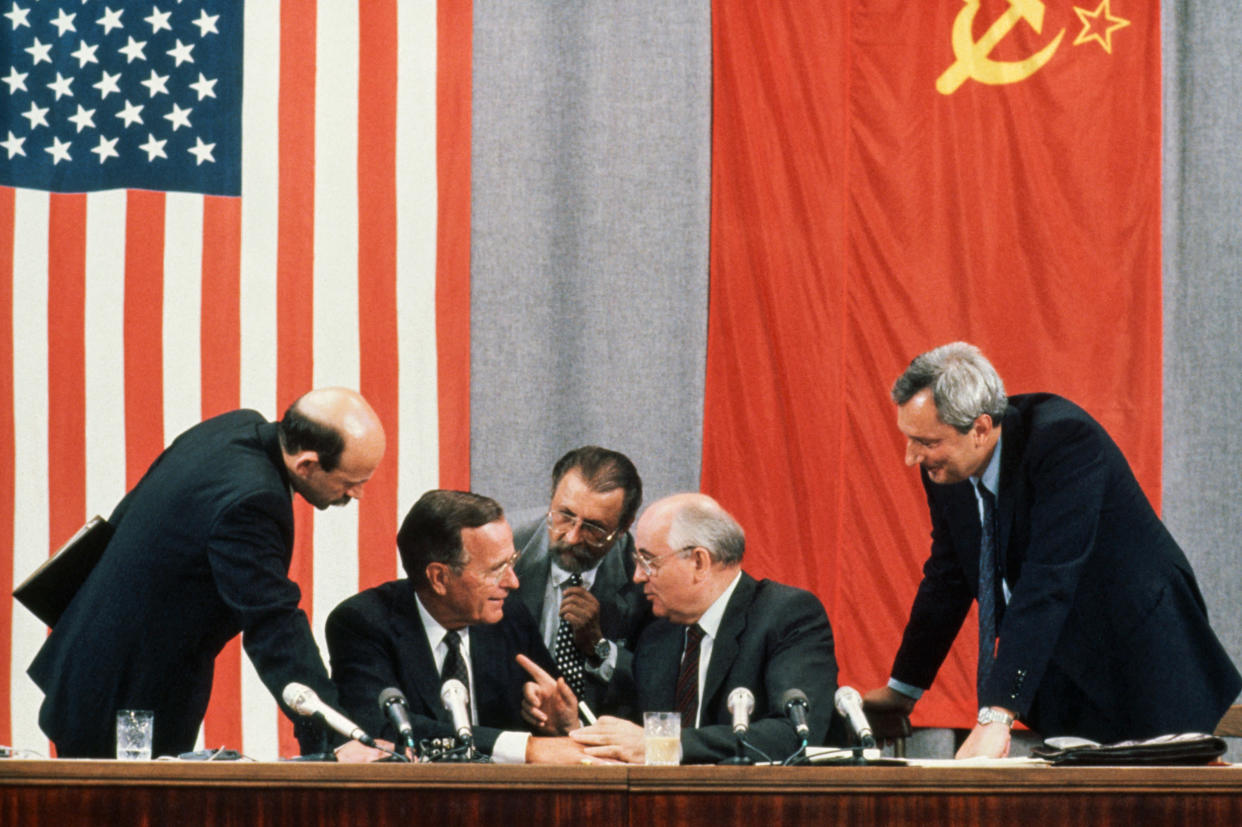 Some blame him for overseeing the destruction of an empire and a way of life, others for failing to ensure a smooth transition to democracy and capitalism.

He defied the image of a typical Soviet leader — his purple birthmark made him instantly recognizable, while his appearance in a Pizza Hut television ad and an episode of “The Simpsons” in the late 90s gave him a near-celebrity status in the West.

In contrast, he was by then a pariah back home, as many people struggled with joblessness, corruption and a lack of stability in the chaotic aftermath of the demise of the Soviet Union. 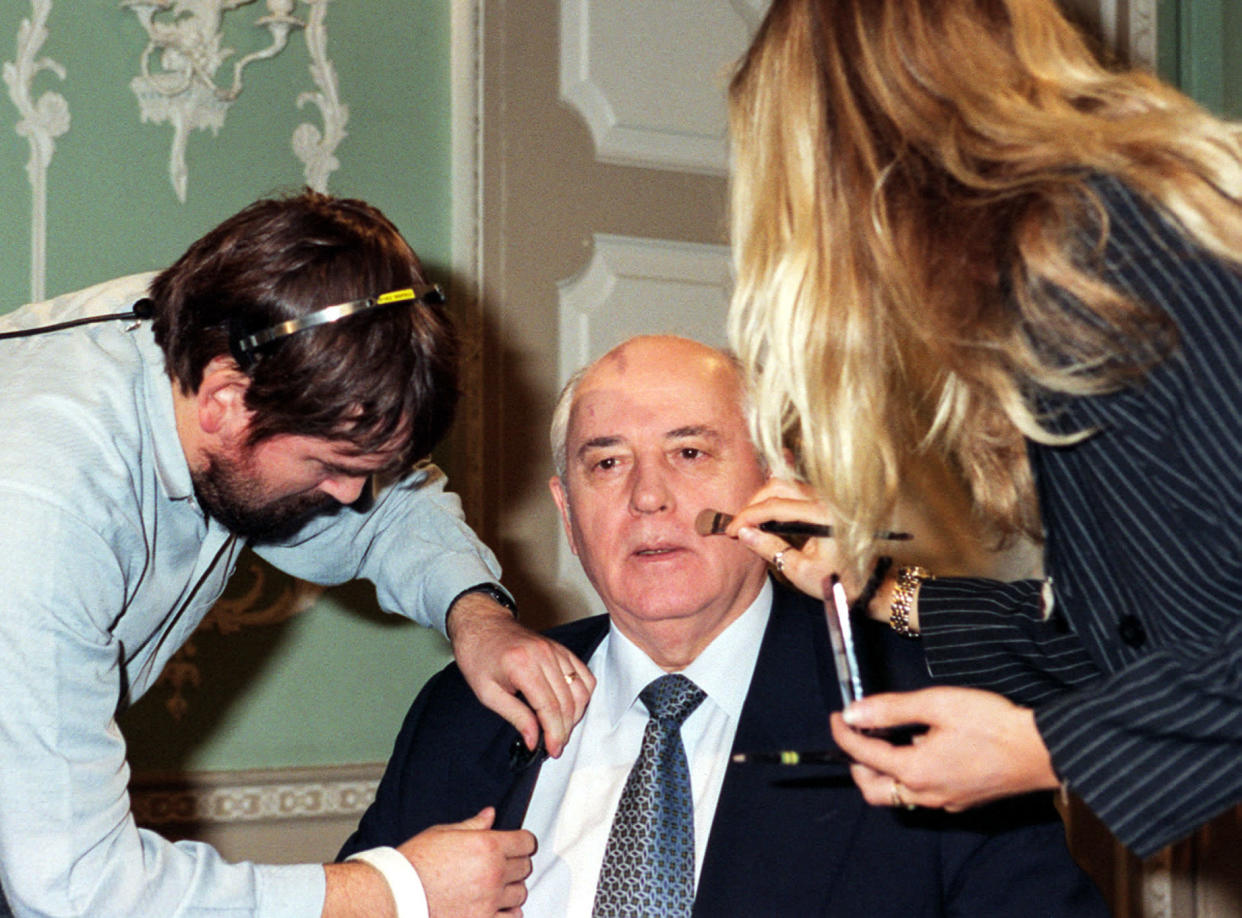 That makes the difference in the reactions to his death expected, said Vladislav Zubok, a professor of international history at the London School of Economics, who has written extensively about Gorbachev.

“He sits astride two very different histories — one history is called the end of the Cold War and victory of the West, and that makes him a hero. And another history is the Soviet demise, collapse, chaos and misery, which makes him a villain,” Zubok said.

And while the end of the Cold War is perceived in the West as Gorbachev’s greatest achievement, it’s seen as a “surrender and capitulation before the West” in Russia, said Nikolai Petrov, a senior research fellow at the Chatham House think tank in London.

“The very things that he is valued for in the West are perceived by many in Russia as a manifestation of weakness,” Petrov added. 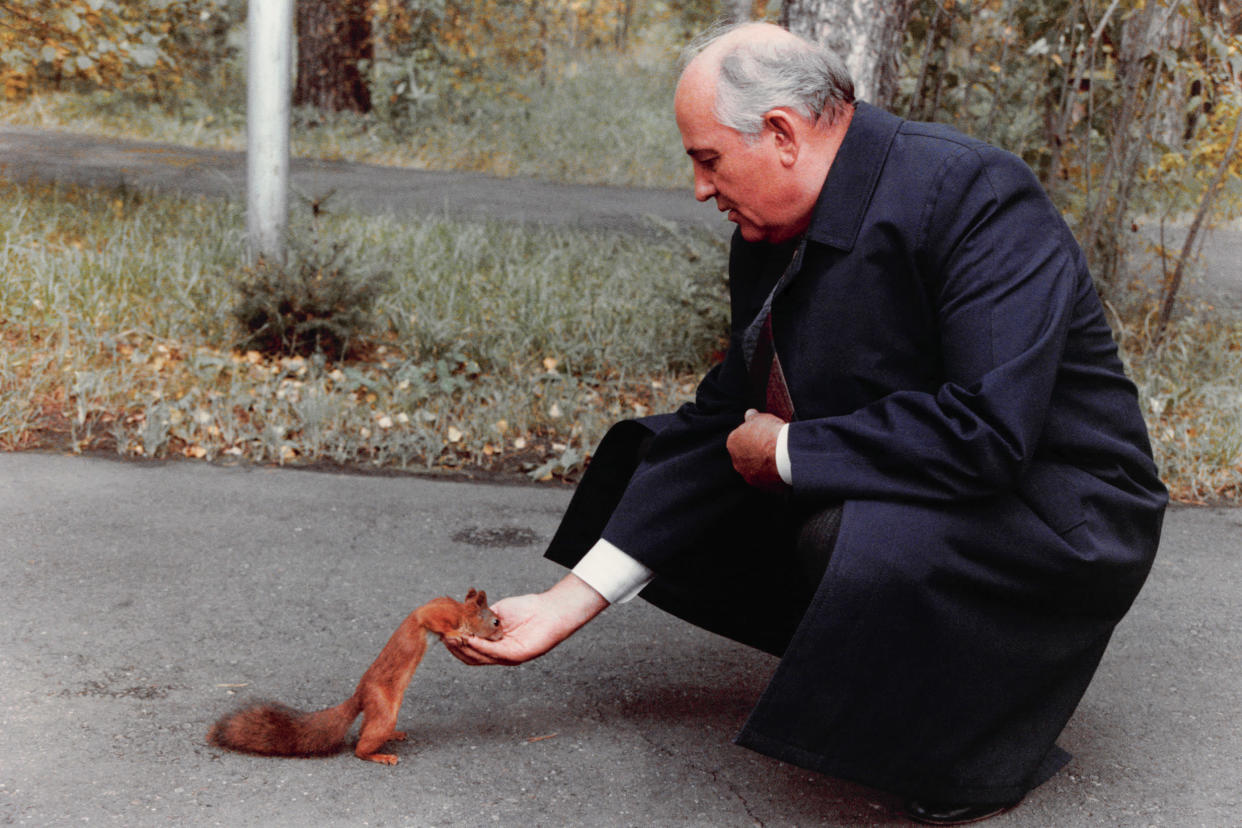 Amid a largely low-key response in Russian media, this mixed legacy was summed up in an editorial by the state news agency Ria: “Russia and the West say goodbye to different Gorbachevs,” it read.

There was still no decision Wednesday about whether Gorbachev would receive a state funeral, which would usually be a foregone conclusion for a figure of his stature.

Sergei Mironov, leader of the pro-Kremlin Just Russia party, told the state news agency Tass on Wednesday that Gorbachev gave the Soviet people “hope for change,” but in the end, it lost them their country.

Jailed opposition leader Alexei Navalny said that his perception of Gorbachev changed in reverse of that, from “savage irritation” to “sad respect.”

Gorbachev’s legacy, Navalny said in a series of tweets from behind bars, will be “evaluated far more favorably by posterity than by contemporaries.” 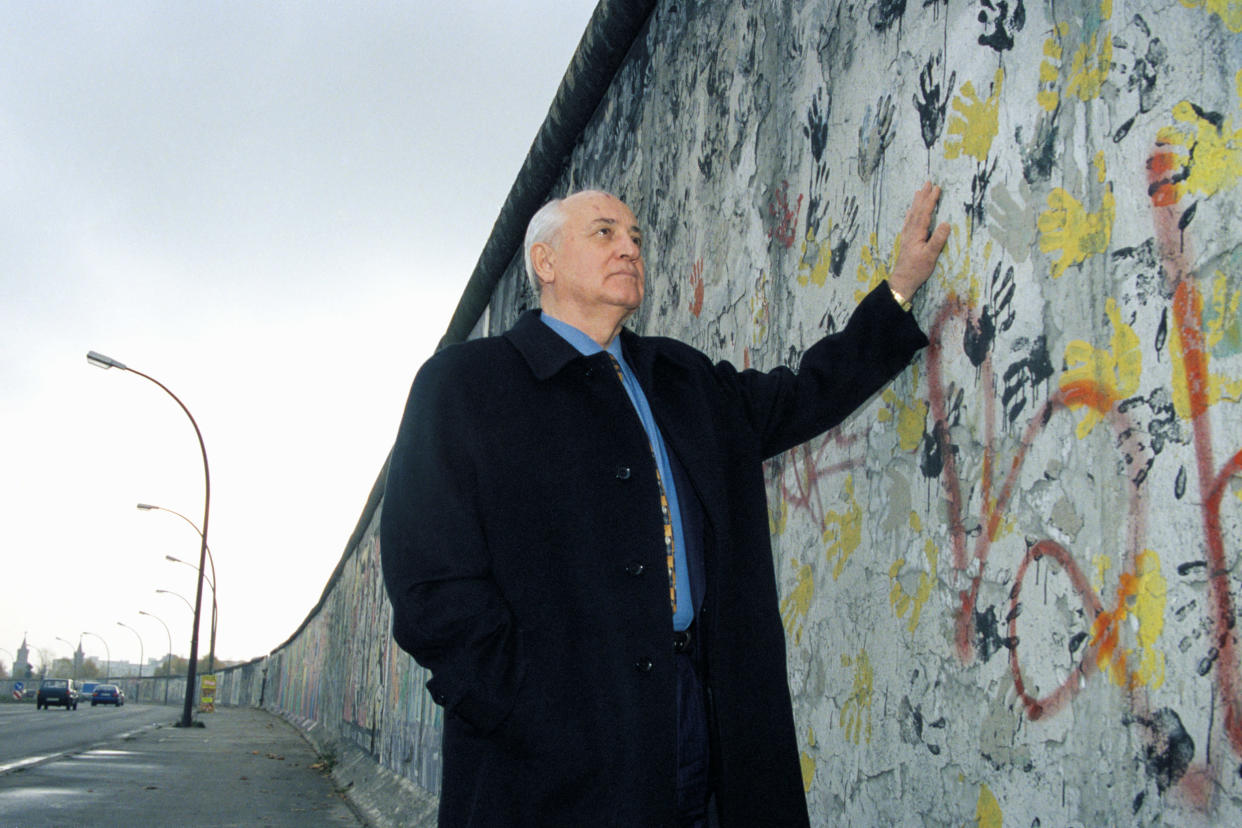 Those sentiments appeared to be echoed on the streets.

“On one hand, he destroyed the Soviet Union, which was a great country, maybe not without problems but those could be solved,” Vladislav Vesnin, 39, a vendor at a Moscow airport, told NBC News on Wednesday. “On the other hand, he was a decent guy, not a thief, like many modern politicians now,” Vesnin said. “So it’s sad that he passed away.”

Ultimately, Chatham House’s Petrov said, Gorbachev’s legacy has been slowly dismantled by his successor,Boris Yeltsin, and then by Putin.

But it retains symbolic importance in showcasing that neither the Soviet Union then, nor Russia now, are “genetically predisposed to evil behavior.”

“It’s like a pendulum swing,” Petrov said. “The fact it swung so far and so positively under Gorbachev, even though there is little left of it now, means that today’s swing the opposite way is not fatal, and we will, whenever that may be, come back to what Gorbachev tried to build and support.”