Quacking up! Plus-size mother is left in hysterics when she discovers her new shiny pants make a noise like a duck when she walks

A mother was left howling with laughter after discovering her new pleather pants ‘quacked’ as she walked.

Gwenna Laithland, 37, was in hysterics as her husband, Jackson, 39, filmed her showing off her plastic leather pants, which ‘squeaked and farted at the same time’, as the rest of her family watched on in amusement.

Hilarious footage shows the plus-size marketer, from Oklahoma City, doubled over and crying with laughter as she says it sounds like she has a ‘duck in her c****r’.

The 30-second clip then shows the mother-of-three declare: ‘There’s a reason it’s hard to find shiny pants for girls who can start a fire with their thighs.’ 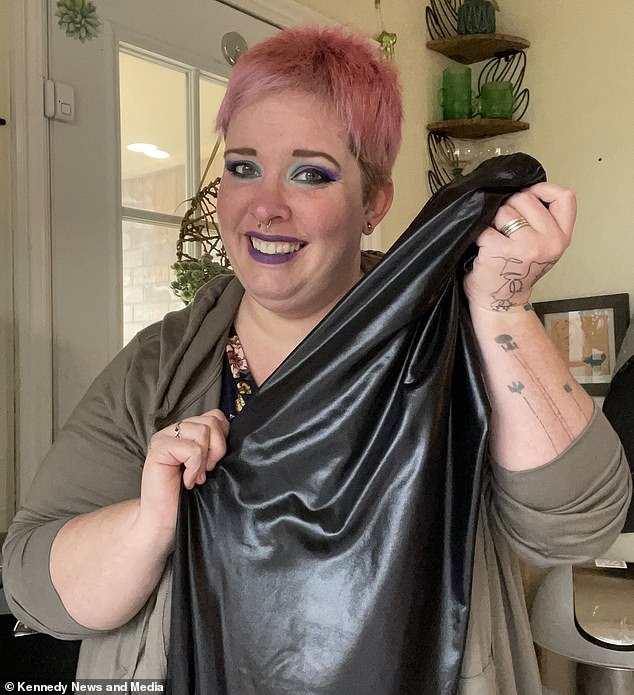 Gwenna Laithland, 37, from Oklahoma City, OK, was left in hysterics as her husband, Jackson, 39, filmed her showing off her new squeaky plastic leather pants 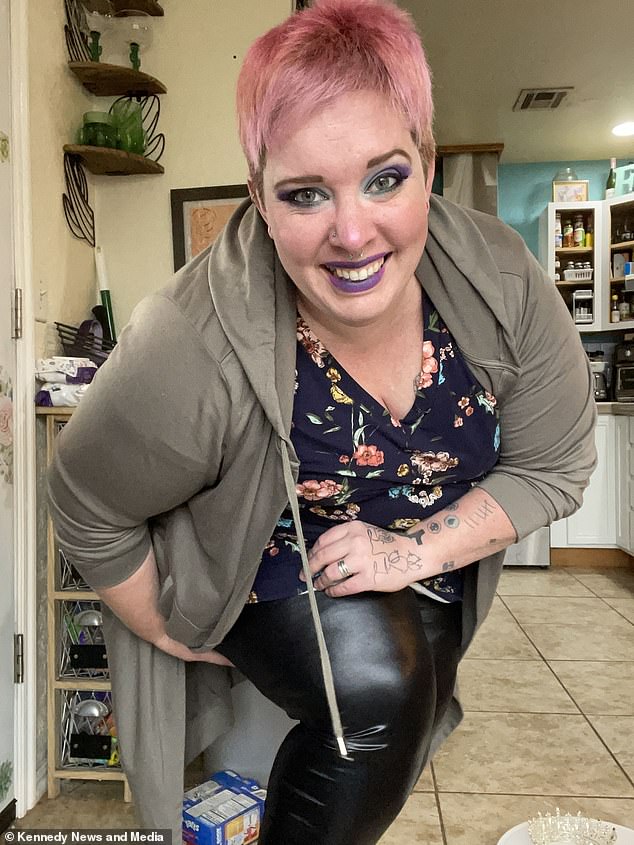 Hilarious footage shows the plus-size marketer doubled over and crying, saying: ‘I sound like I have a duck in my c****r’

As she swings her legs back and forth, Gwenna lets out a laugh as the fart-like sound erupts from between her thighs.

But Gwenna found the squeaking noise disappeared once she gave the pants a wash, much to the disappointment of her eldest daughter who wanted to ‘experience the quack in person’.

Despite the unusual noises emanating from her undercarriage, Gwenna has not sworn off shiny pants.

Instead she hopes to find some more so she can ‘blind people’ with her ‘thunder thighs’.

The video of Gwenna’s fashion mishap has racked up more than 11 million views on TikTok and brought in thousands of comments from entertained viewers.

Gwenna said: ‘When they arrived and I put them on, they didn’t squeak.

‘It was only when I rounded the corner and left the bedroom that I heard the first quack.

‘I called out to my husband, “Jackson! I’m quacking!”

‘It took ten minutes for Jackson to stop laughing enough to film me. I was just about recovering when another quack came out.

‘The pants were both squeaking and farting at the same time. I could hear the squeak and feel air moving from around my bum, and that’s what made the quack sound.

‘I wanted shiny pants but it didn’t go how I wanted it to go, I thought it was hilarious.

‘Everybody was in fits of laughter. My three-year-old twins couldn’t stop laughing. Every time I take a step, there’d be a quack. We were probably laughing for about 30 minutes.

‘My 14-year-old was at school at the time and she was mad that the pants no longer quacked by the time she got home. She wanted to experience the quack in person.’ 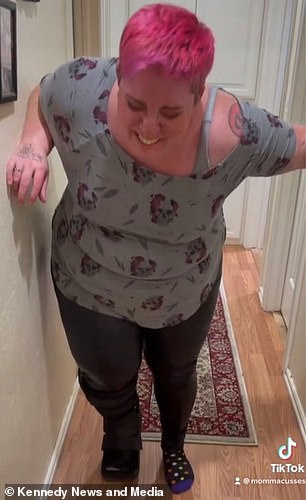 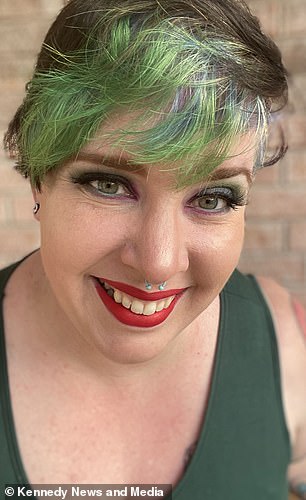 Despite the unusual noises emanating from her undercarriage, Gwenna has not sworn off shiny pants from her wardrobe as she hopes to find others so she can ‘blind people’ with her ‘thunder thighs’

For Gwenna, the ‘shiny pants’ were her first pleather product – and they certainly won’t be her last.

Gwenna said: ‘I’ve always wanted shiny leather pants. I fancy myself a bit of a rocker from time to time, not that I play any music, but I like the aesthetic.

‘These were my first pleather pants. In the 1990s and 2000s, we wore those leather pencil skirts, but this was my first pants purchase.

‘I’ve been on the hunt for some leather pants and I found a pair on Amazon. I was going to commit, embrace body positivity and buy them.’

Gwenna said that despite the amusing outcome of her new purchase, the fashion industry needs to do more for plus-size customers.

Gwenna said: ‘I think a lot of things need to be done with regards to the plus-size industry, adding more fabric is not really a solution.

‘There is a way to make shiny pants approachable for people who are plus size. 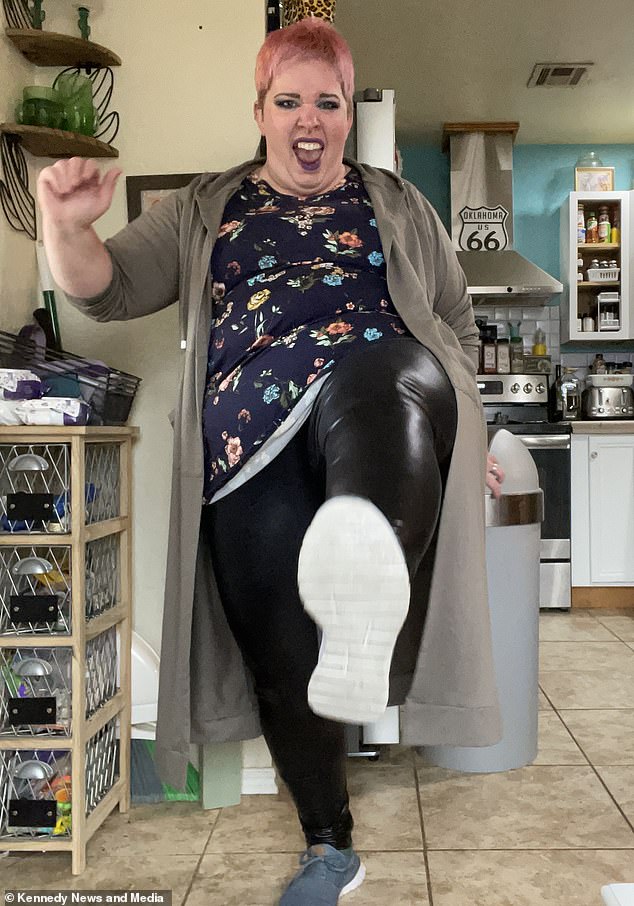 ‘That was a joke I made in the video where I said ‘I could start a fire with my thighs’. Those pants were giving me a friction burn.

‘There is a way to deliver the same aesthetics for different body types, but it takes the extra steps to make those pants.

‘It’s the same at the other end of the scale with very petite people, and the fashion industry seems to have an attitude of “we’re going to make one thing, and if it doesn’t work, then f*** off.”‘

Since Gwenna gave her new pants a spin in the washing machine, the duck-like noise has washed away much to the chagrin of her kids.

Although she has since silenced the squeak, Gwenna’s on the hunt for more pleather pants in a bid to ‘blind people with her thunder thighs’.

Gwenna said: ‘I washed the pants and for whatever reason, that resolved the quack. So I can now wear shiny pants.

‘I will be making future purchases. I will be taking the next step and going on the hunt for what I’m going to term ‘ultra-shiny pants’.

‘I don’t know if they’ll quack, but I want to be able to blind people with my thunder thighs.’

after, hysterics, in, left, mother
You may also like: