Media scion Lachlan Murdoch is seeking to rely on the evidence of a social media expert in his defamation fight with online publisher Crikey, the Federal Court has heard, as the parties remain locked in a protracted dispute over pre-trial issues.

Sydney barrister Sue Chrysanthou, SC, acting for Murdoch, told the court on Wednesday that social media was “the modern-day grapevine” and alleged Crikey had paid for some posts about her client “to be promoted and advertised”. 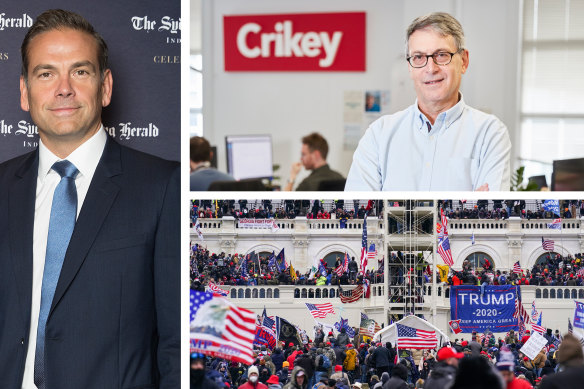 “We want the expert to address that issue, and the effect of promoting particular posts and how that then causes those posts to appear in different people’s feeds, even if they haven’t gone to the post themselves,” she said.

Chrysanthou said expert evidence on the reach of the posts was relevant to the potential damages award as well as to the new serious harm test that is now law in most jurisdictions in Australia, including NSW where the trial will be held.

Murdoch, chief executive of Fox Corporation and elder son of media baron Rupert, filed defamation proceedings in August against Crikey over a June 29 article naming his family as “unindicted co-conspirators” of former US president Donald Trump following the deadly US Capitol riots in 2021.

Murdoch claims the article conveys up to 14 false and defamatory meanings including that he “illegally conspired with Donald Trump to incite an armed mob to march on the Capitol” following the 2020 presidential election.

Crikey denies any of the alleged meanings were conveyed. The publisher also disputes that the article satisfied the serious harm test, aimed at weeding out trivial claims, which requires the person bringing a defamation case to show that the publication “has caused, or is likely to cause, serious harm” to their reputation.

If Justice Michael Wigney finds at least some of the meanings were conveyed and the serious harm test is satisfied, Crikey is seeking to rely in part on a new public interest defence that started last year in NSW.

The court heard the author of the article, Bernard Keane, and Crikey editor-in-chief Peter Fray would give evidence in the case. Fray is currently on indefinite leave over unrelated matters.

Beecher and Private Media chief executive Will Hayward are not expected to give evidence in the case. Chrysanthou said this raised issues about how the court would assess whether Private Media had the reasonable belief required under the public interest defence.

The court heard the Murdoch camp was seeking to put some 180 interrogatories – written questions – to Private Media, Keane and Fray before the trial. Chrysanthou said those questions were relevant to the parties’ state of mind.

“Do you want this to go to trial in March?” Wigney asked, in a nod to the likelihood the interrogatories would delay the timetable. “I would withdraw your application for interrogatories.”

The parties return to court on Thursday as legal argument continues. Chrysanthou told the court it would be preferable for a pre-trial mediation – aimed at settling a case pre-trial – to be held this year.