A district attorney in New Mexico is defending her decision to let nearly all defendants in a Santa Fe rioting case avoid jail time, according to a report.

Carmack-Altwies wants seven of the eight defendants to enter a pre-prosecution probation program, calling their case – that they allegedly destroyed a 152-year-old obelisk last October – “a political problem that got forced upon the criminal justice system,” the newspaper reported.

But her critics include former Santa Fe City Council member Ron Trujillo, who called the DA’s plan “a crock of crap,” according to the newspaper.

“What a crock of crap that these people who were involved in vandalizing city property technically get off with a slap on the wrist,” Trujillo told the newspaper last week.

“Where’s the accountability? They’re not being held accountable.”

Another critic – Virgil Vigil, head of a local fraternal organization – referred to Carmack-Altwies and Santa Fe Mayor Alan Webber as “out-of-town transplants” who “don’t care about our people and our culture.”

The seven defendants targeted for probation would hold that status for six months to two years and perform 40 hours of community service – as well as be required to write a letter admitting their role in toppling the obelisk, according to the newspaper.

She noted that the seven defendants were all first-time offenders and would likely not face jail time anyway if convicted at a trial, the report said. 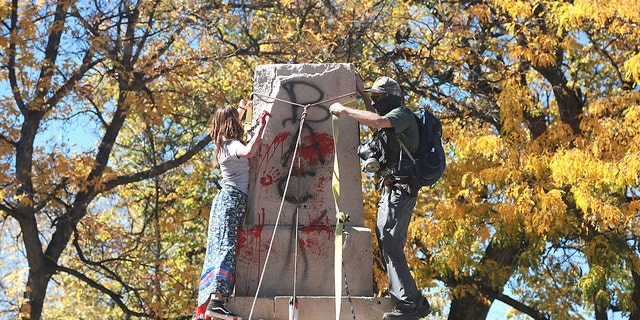 Demonstrators secure a rope around the centerpiece of a solid stone obelisk before tearing it down in Santa Fe, New Mexico, Oct. 12, 2020. (Associated Press)

She added that community members affected by the rioting damage would help determine what community service projects the defendants would perform.

Carmack-Altwies described the “restorative justice” concept as having the goal of reconciliation in the community.

“It’s supposed to bring both sides together and get everyone to come to a resolution or conclusion about what they should do as part of their punishment – and it is a punishment,” she said. “It’s not punitive, necessarily, in that it’s not jail. But it is a punishment: They have to participate in this. And if they drop out and don’t do it, then we lift the stay and prosecution keeps going.”

The obelisk had long been opposed by Native American groups and others, and was knocked down on Indigenous Peoples Day – which many other communities mark as Columbus Day. The groups had said they opposed language on the obelisk that referred to “heroes” dying in battle against “savage Indians,” the newspaper reported.

The suspects were arrested about three months after the incident, the newspaper reported.

Carmack-Altwies said she was seeking a solution that would “extract to the most payback” for the community without dropping “the sledgehammer of justice” by seeking jail terms.

The seven defendants were charged with felony counts of damaging property worth over $1,000, the New Mexican reported. The eighth defendant was excluded from the restorative justice proposal in part because he lacked a lawyer, the newspaper reported.

‘restorative, das, J, mexico, New
You may also like: