Number 10 today insisted the Prime Minister would always ‘promote and champion British companies’ – despite the revelation that senior ministers could lose their UK-made Jaguars in favour of German Audis.

Both Boris Johnson and top Cabinet ministers currently have use of a fleet of Jaguar XJs and Range Rovers to transport them on Government business.

But it has now emerged that some of their vehicles might be replaced by Audi A8s after Jaguar paused production of its XJ model following a drop in demand due to the Covid pandemic.

According to The Sun, the Metropolitan Police – who are responsible for the protection of Government ministers – will switch from armoured Jaguar XJs to bulletproof Audi A8s from next year.

The newspaper reported that ministers are furious about move and the message it sends to British manufacturers. One Cabinet member was even said to have blamed ‘anti-Brexit bureaucrats’ for the decision. 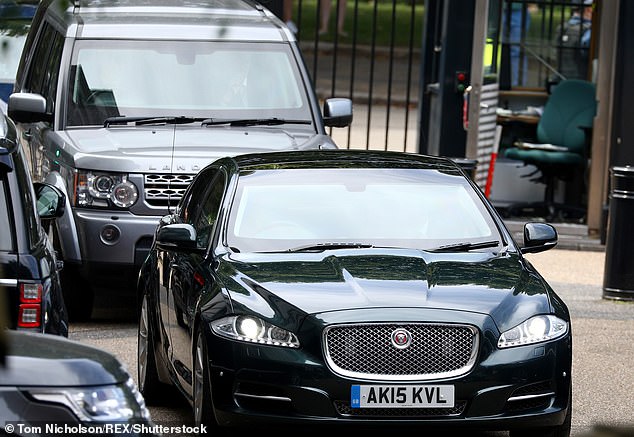 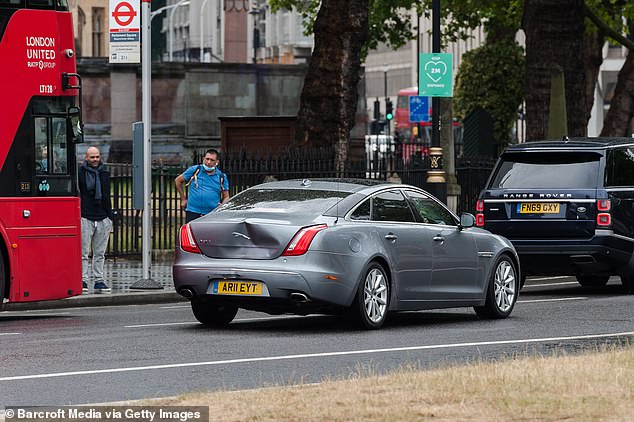 Boris Johnson’s Jaguar suffered a large dent in the back in 2020 after a protester ran in front of the vehicle, which forced it to stop and be struck by a vehicle from behind

Downing Street today insisted the choice of ministerial cars was ‘a matter for the Met Police’ when asked about the possibility of Mr Johnson’s successor – whether Liz Truss or Rishi Sunak – being chauffeured in a German rather than a British-made vehicle.

A Number 10 spokeswoman said: ‘When it comes to certain ministerial cars, it is matter for the Met Police who obviously also take in wider security considerations.’

They added that the PM ‘will always promote and champion British companies’.

Labour’s John Spellar – the MP for Warley, which is near to Jaguar’s traditional Birmingham base – called for Home Secretary Priti Patel or London mayor Sadiq Khan to ‘get a grip’ on Scotland Yard.

He posted on Twitter: ‘Patrol cars from BMW, vans from Mercedes, now PM in an Audi, the Met have got form in backing GERMAN auto industry.

‘But this is really over the top, will Home Sec or indeed the Mayor get a grip.’