Follow
Home » World News » On the rails with Gorbachev, in the twilight of the Cold War

On the rails with Gorbachev, in the twilight of the Cold War

The train slid out of Moscow into the late afternoon, gliding through forests of fir trees laden with snow. It was the winter of 1988, November freezing into December. 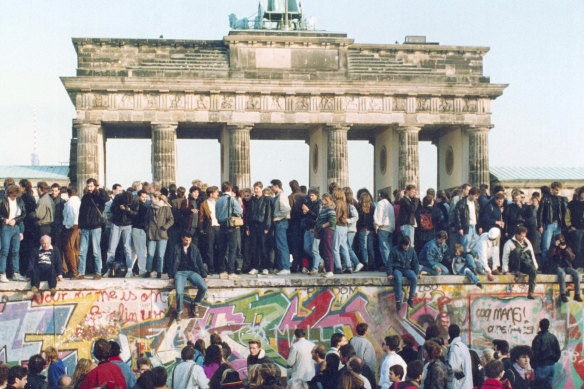 Germans from East and West celebrating on the wall the day after the borders opened on November 9, 1989. The fall of the Berlin Wall symbolised the end of the Cold War, an achievement that was largely credited to Mikhail Gorbachev’s leadership.Credit:AP

As the evening came down it was possible to divine a communal yearning for something undefined. Something better. Just out of reach. The corridor filled with passengers standing silent, gazing at the snow-purified landscape until the light faded into night.

The memory of it was revived this week when we learned that Mikhail Gorbachev, the first and only president of the Soviet Union, had died. None of us on that train in the winter of 1988 could have imagined it, but we were travelling, inspired by Gorbachev, towards an end to the 20th century as we had known it.

The beginning of the disintegration of the Cold War, that long period when the fear of nuclear annihilation lay like a pall over both the West and the Soviet Union and its minions, was already underway. The Berlin Wall – the starkest barrier between the East and the West – would fall within a year.

The Union of Soviet Socialist Republics, 66 years old in 1988, had less than three years remaining. Yet even the CIA – supposedly the world’s most clued-up spy agency – would famously fail to predict these epoch-shifting events.

The spies and analysts had, in short, drastically underestimated the consequences of Gorbachev’s determination to place the sclerotic Soviet Union on a track towards modernisation and measures of freedom unknown across his peoples’ territories in anyone’s lifetime.

In the end, even Gorbachev himself would fail to comprehend how the freedoms he unleashed would lead – with the connivance of the clownish drunk, Gorbachev’s former ally, Boris Yeltsin – to the end of the Soviet Union itself in December 1991.

All this was ahead as the train took us 1000 kilometres north-east that night to Tallinn, the capital of what was then the Estonian Soviet Socialist Republic.

There, I would listen to gales of what seemed impossible demands for independence. I would travel on through the Baltic states of Latvia and Lithuania, where the cries for freedom mixed with those for an end to “Russification” – the policy of stacking Baltic populations with Russian immigrants who got the best housing and jobs. 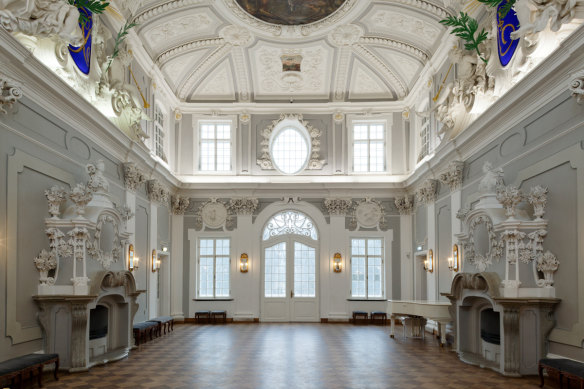 Kadriorg Palace, in Tallinn, Estonia, was founded by Russian Tsar Peter I in 1718.

Mikhail Gorbachev, as it happened, was responsible for my presence on those tracks all those years ago. Having ordered the Soviet Union to shake off its economic and political stagnation through “perestroika” – restructuring – Gorbachev had also granted permission for his people to speak freely about the USSR’s problems, a policy known as “glasnost”, meaning openness and transparency.

It is difficult now to imagine the impact of such policies on a people who had learned to be terrified of publicly speaking their minds. A pre-dawn knock on the door and exile to the gulags of Siberia had proved the fate of millions. In the West, talk of openness and restructuring in the Soviet Union was met with scepticism. An Estonian poet, however, told me: “Once you have taken your first breath, it is impossible to stop breathing.”

Gorbachev was keen to show the world he was serious. He ordered that foreign journalists be invited to visit the Soviet Union, and that they be free to choose where they wished to go. I received just such an invitation and risked a knock-back when I requested to visit the restive Baltic states of Estonia, Latvia and Lithuania.

The Soviet Embassy in Canberra held out on issuing a visa until two days before I was to depart. Perhaps it was simply an extension of the everyday inefficiency strangling the Soviet Union. Everywhere I travelled, surly attendants closed doors in my face as I approached seeking assistance, or to change money, or to purchase anything. 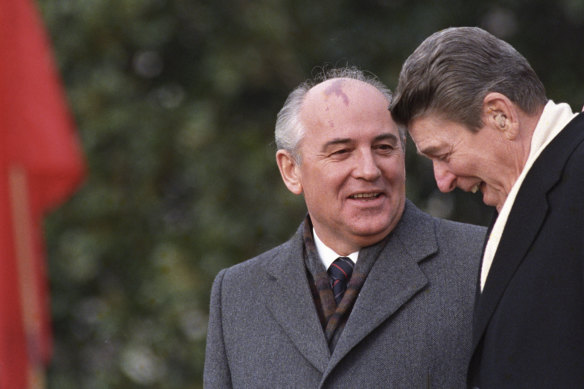 US president Ronald Reagan, right, with Soviet leader Mikhail Gorbachev at the White House in 1987.Credit:AP

An allegedly first-class restaurant was empty, waiters standing around, the whole comedy visible through locked glass doors. I was told there was not a seat available. My guide, furiously embarrassed, demanded we be given a table. The food was all but inedible.

Factories operated with ancient machinery at a pace that might, if you were generous, be described as idle. Masters of black humour offered a refrain: “They pretend to pay us, we pretend to work.”

Hotel bills were calculated on ancient adding machines and jotted in pencil. On every street, black marketeers offered 10 roubles to an American dollar. The official rate was one rouble to two dollars. It was a theatre of the absurd. Yet, long experience of tyranny meant no one quite believed it could change.

Perhaps it would not have, if Gorbachev did not push his twin visions of perestroika and glasnost and allow the Cold War to collapse without serious bloodshed.

That old train journey, thus, ended at least metaphorically at the start of a brief golden period when a genuinely hopeful world seemed possible, and began to emerge. It is why we must remember Gorbachev as among the most significant world leaders of his century.

And yet, when the USSR disintegrated and 15 Soviets gained independence and the map of Europe was altered for the better, Gorbachev was not forgiven at home.

His people, it turned out, had wanted freedom but wanted to retain the idea of their old Russian empire more. They ended up with the would-be czar, Vladimir Putin. And so the world turns.