Consternation is brewing among the hardworking team at the Olivia Newton-John Cancer Wellness and Research Centre inside the Austin Hospital.

The medical centre is doing its best to promote vaccinations during the pandemic while quietly freaking out about how to handle its “founding champion” who, when it comes to getting the jab, doesn’t appear to be singing from the same songsheet. 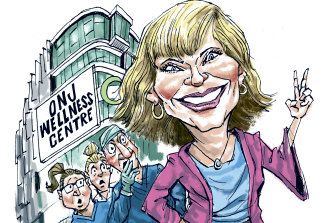 The Melbourne-raised singer, songwriter, actor, entrepreneur, activist and medicinal cannabis advocate resides at a Californian ranch. She was frank earlier this year when she said she had no plans to take the COVID-19 vaccine “at this point”.

In the same interview, Newton-John’s heavily reworked daughter, Chloe Lattanzi, denied she was an anti-vaxxer, but opined she was “anti putting mercury and pesticides in my body, which are in a lot of vaccines”.

So imagine the angst at the top rungs of the Austin and the adjoining ONJ complex, where the comments haven’t gone unnoticed as the centre becomes one of the state’s biggest vaccination hubs.

As of early August, the hospital had administered more than 800,000 jabs.

Keen to spruik the good work, the ONJ Centre’s media team released a message from its vaccination boss, Dr Janine Trevillyan, in late July selling the COVID-19 jab as the “key to living a normal life”. “The vaccines have been extensively tested, monitored and have now been given to millions of people world-wide,” Dr Trevillyan said. “The protective benefits of the vaccine far outweigh any risks so really the question is, why wouldn’t you get vaccinated?” 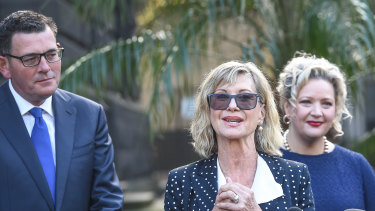 Olivia Newton-John (centre) with Premier Daniel Andrews and then health minister Jill Hennessy at the ONJ Centre in 2018. Credit:Fairfax

Perhaps that’s a question for Newton-John, who didn’t respond to CBD. As for the Austin and the adjoining cancer centre, a spokeswoman gave the following terse response without managing to mention Our Livvy at all. “Austin Health is proud to be leading the rollout of the COVID vaccine across the north-east of Melbourne … The vaccine is safe and effective and our greatest defence against the virus. We encourage all Victorians to get vaccinated.”

With up to $12 million at stake, the Turnbull v Pillemer legal fight was never going to be anything other than a lawyers’ picnic. Now it’s a spinners’ picnic as well.

Back in the day, Malcolm Turnbull gave a loan to purchase shares to family friend Russel Pillemer, chief executive of Pengana. On becoming prime minister, Turnbull gifted the $6 million loan to his children, Alex and Daisy, when he tied up his business affairs. 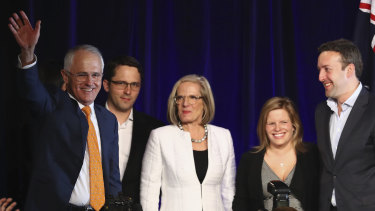 Now Alex is suing Pillemer in the NSW Supreme Court, alleging he withheld relevant information about the future value of the shares, which deprived the family of millions of dollars. Ian Jackman, SC, is acting for Alex while Pillemer has retained Robert Newlinds, SC, whose questions to Turnbull jnr were met with regular yawning, eye-rolling and questions fired back in riposte. So much so that Justice Kate Williams intervened at one point with a dressing down: “You really need to actually answer the question rather than ask questions.”

Then there are the spinners. Clive Mathieson, of crisis communication firm Cato & Clive, was engaged by Alex. As The Australian noted in its 1100-word report, Mathieson was a former prime ministerial staffer for Turnbull. But in an uncharacteristic bout of modesty, the paper failed to reveal that Mathieson was once editor of … The Australian.

On Monday, Pillemer reached out to rival spinners John Connolly & Partners. Connolly has a weekly motoring column in The Weekend Australian and is a spokesman for the Murdoch family. Small world. “Pillemar brought us in mid-yesterday. We’re still playing catch-up but please let me know if there’s any way I can assist,” the firm’s consultant, Louise Hall, emailed journalists. Alas, such was the speed that the firm was brought on board that its email managed to get its client’s name wrong.

Meanwhile, it looks like Lucy Turnbull, who logged into Microsoft Teams to hear husbo Malcolm give evidence, could do with some comms advice. For at least 10 minutes, she was front and centre of proceedings after forgetting to switch her camera off.

There’s still time to help those optimistic souls at the Liberal Party win back Victoria via the party’s fundraising raffle, which will be drawn on Tuesday.

While the fundraising raffle is careful to describe each prize in the most lavish terms, buried in the raffle’s terms and conditions are dollar values attached to each prize, giving a pretty clear indication of hierachy.

A hit of tennis for two with the federal Treasurer Josh Frydenberg in his local electorate of Kooyong is described as “priceless”, but valued at $2500. An “unforgettable” lunch for two with former prime minister Tony Abbott is valued at $2000.

Minister for Superannuation Jane Hume clearly knows a thing or two about cocktails — her “ultimate cocktail-making class” experience is valued at $1500.

The rare chance to “shoot some hoops” (we think this is a basketball reference) with Assistant Treasurer Michael Sukkar (including post-exertion beers and burgers) in his Deakin electorate comes in also at $1500.

angst, at, jab, Livvy, Our, prompts
You may also like: