Washington: Plants can grow in lunar soil. They don’t love it – they become stressed, and may turn purple after initially looking green – but they can still germinate in lunar soil, send roots through it, sprout leaves, get bigger and potentially be edible.

That’s the remarkable result of an experiment conducted by researchers at the University of Florida who planted seeds in samples of lunar rock and dust brought home half a century ago by the Apollo astronauts. The study, published in the journal Nature Communications Biology and funded by NASA, is the first known example of plants being grown in lunar soil, said co-author Anna-Lisa Paul, a University of Florida plant molecular biologist. 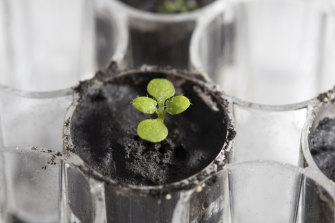 An arabidopsis plant was grown in lunar soil gathered when American astronauts landed on the moon. Credit:Tyler Jones/University of Florida, IFAS

Paul and her colleague and co-author, Robert Ferl, sought four grams of lunar soil from NASA and wound up with 12 grams – four each from three missions: 11, 12 and 17. They planted seeds of the fast-growing, weedy plant thale cress, or arabidopsis.

They had no idea what to expect when they first added water to the samples. The soil had been sealed and archived at NASA’s Johnson Space Centre in Houston. The samples had never been exposed to air, liquid water or any of the other pleasantries of Earth.

They did not blow up. They did not do anything at all, in fact: The samples were extremely hydrophobic, and repelled water as if it were the most disgusting thing ever invented. Researchers laboured to get the lunar soil to gradually soak up water. They also added a nutrient solution. 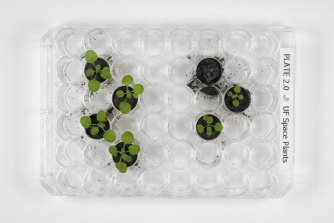 By day 16 of the experiment, arabidopsis plants show differences based on the soil in which they were planted. Plants grown in simulated lunar soil, left, are bigger compared with those grown in the lunar soil.Credit:Tyler Jones/University of Florida, IFAS

But what happened next was further proof that, as Jeff Goldblum’s character famously put it in the movie Jurassic Park, “life finds a way.” The plants germinated, and began to leaf out.

They struggled, some more than others, depending on where the soil samples came from. The soil scooped from the surface by the Apollo 11 astronauts was not as congenial to growth as that from the two later Apollo missions.

A subsequent analysis showed the plants activated stress genes akin to those seen in plants exposed to harsh conditions, such as salty water.

The researchers concluded that the lunar soil could be used for plant production and experiments on the moon but is “not a benign growth substrate,” as the study put it.

“I think it’s amazing that the plant still grew,” Ferl said. “Right, it’s stressed, but it doesn’t die. It doesn’t fail to grow at all. It adapts.”

The experiment is encouraging for NASA and other space agencies that hope to be able to support human missions on the moon’s surface by taking advantage of natural resources.

“The idea of bringing lunar soil into a lunar greenhouse is the stuff of exploration dreams,” Ferl said. “If you look back at science fiction, plants have always been part of the deep exploration agenda.”

Eden the moon is not. The radiation-baked surface is essentially sterile. Lunar soil contains some familiar elements, including iron and magnesium. But it lacks many of the minerals found on Earth. And the soil has a different, harsher texture: lots of tiny, sharp shards. It contains microscopic pieces of glass left over from meteorite impacts. You wouldn’t want to breathe it.

But the plants germinated, and grew, and for a few days looked really quite verdant before they seemed to figure out that they did not like growing in soil not of this Earth. And their roots did not grow straight like the roots from seedlings planted in simulated lunar soil that served as the control substance for the experiment.

“The roots were more bent and gnarly,” Paul said.

Still, she said, the plants would be edible.

“It is edible, but it’s not especially tasty. It’s not considered a food crop per se,” she said of thale cress. The plant was picked in part because it has been so thoroughly studied previously, including on missions to the International Space Stations.

No one is claiming that the moon could someday be green. But plants could be genetically engineered to be more adaptable to lunar soil. And if scientists want to do greenhouse-based experiments involving plants on the lunar surface, they would have an easier time if they could use the soil lying around rather than trying to blast it off the surface of the Earth.

Jacob Bleacher, chief explorations scientist for NASA, said missions to the moon and, someday, to Mars will require using resources on-site rather than hauling everything from Earth.

“As we think about sending astronauts to the moon, eventually out into the solar system, and other destinations like Mars, we have to learn to live off the land as we do that,” Bleacher said.

Sharmila Bhattacharya, NASA program scientist for space biology, said there’s more work to be done to make plant cultivation a useful tool in lunar exploration. And she noted that plants are already cultivated on the International Space Stations and serve more than simply a nutritional function. The astronauts, she said, like being around the plants. They check on the plants in their spare time.

“It really surprised us how much they love those plant habitats,” she said. “When they celebrate each other’s birthday, they do it near the plant habitat. We’ve realised how much of a positive difference plants have made.”

Paul said she and Ferl watched the Apollo missions as children and that played a role in their decision to go into science. Handling the lunar samples was an emotional experience for them, she said. And she was definitely careful with the samples.

“You’re handling the national treasure in your hand,” she said. “Don’t sneeze.”