Edinburgh: Scotland’s First Minister Nicola Sturgeon choked back tears and insisted “I would never have wanted to ‘get’ Alex Salmond” as she rejected as absurd his claims of a plot among senior party figures to destroy him.

The Scottish leader strongly denied being part of a plot against her predecessor, as she testified under oath in a political saga involving a sexual misconduct investigation that is threatening both her job and her push for an independent Scotland.

She told a parliamentary inquiry the “simple” truth was that several women had made complaints about Salmond and “I refused to follow the usual pattern of allowing a powerful man to use his status and connections to get what he wants”. 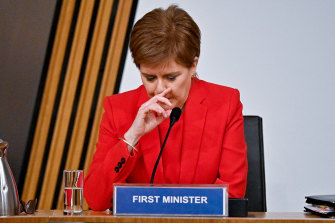 In an appearance over eight hours Sturgeon insisted she had seen “nothing that comes within a million miles” of supporting Salmond’s claims of a conspiracy.

Although she reiterated it was “beyond question” that Salmond had been cleared of all criminal charges, she said his behaviour was still “deeply inappropriate” and “there was not a single word of regret” from him during his six hours of testimony last Friday.

In her opening statement, Sturgeon admitted her government made a “very serious mistake” when investigating sexual misconduct complaints against her predecessor and mentor, and apologised to two female civil servants who lodged complaints.

She said she wanted to “rebut the absurd suggestion that anyone acted with malice” and claimed her government had “tried to do the right thing” despite bungling its investigation. 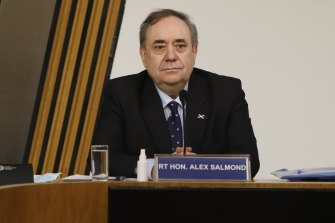 Sturgeon appeared on the verge of tears as she was invited to apologise to the Scottish people for arguing for years that they could trust Salmond to take them to independence. Murdo Fraser, a Conservative MSP, pressed her on when she had decided that he “was in fact a liar and a fantasist?”

Admitting that she had had to “rethink certain things” about him, Sturgeon said: “As I was watching him on Friday lashing out against us, I don’t know whether he ever reflects on the fact many of us, including me, feel very let down by him. That’s a matter of deep personal pain and regret for me.”

She faced a litany of allegations that she had broken the ministerial code – normally a cause for resignation – after two key witnesses corroborated Salmond’s version of events.

Sturgeon admitted that people would struggle to understand parts of her account, including forgetting a meeting on March 29, 2018 at which she was informed about sexual misconduct claims against him.

As she gave evidence Salmond announced that he had lodged a formal complaint about a Scottish Government official who allegedly leaked the name of a woman who made allegations against him.

Douglas Ross, the Scottish Conservative leader, said: “The abiding memory of this evidence session will be Nicola Sturgeon proclaiming ‘I can’t recall’ on repeat. It’s not remotely credible, in fact it’s plainly absurd, for the First Minister to ask us to believe her account of a secret meeting that she claims to have forgotten entirely, instead of the evidence of multiple credible witnesses.”

Social media messages have emerged from her husband Peter Murrell and her Scottish National Party’s chief executive, in which he said it was a “good time to be pressurising” police to investigate Salmond. She insisted this had been taken out of context and the full message gave a “very, very different impression”. She said the messages were between people cooperating with police inquiries and supporting one other.

Salmond won a judicial review in 2019 when Scotland’s highest civil court found that the way the Scottish government investigated sexual misconduct allegations against him was unlawful. The SNP administration he once led paid him £512,250 ($917,230) of taxpayers’ money to cover his legal costs after the judge Lord Pentland ruled the inquiry was “procedurally unfair” and “tainted with apparent bias”. The committee’s inquiry into the debacle started after Salmond was acquitted of sexual assault charges at the High Court last year.

Sturgeon denied one of her officials had named a complainant in a meeting with Geoff Aberdein, Salmond’s chief of staff, in Mar 2018. But Aberdein’s claim has been corroborated by Kevin Pringle, the SNP’s former chief spin doctor, and Duncan Hamilton, a former MSP.

Salmond was adamant last week that Sturgeon knew about the allegations at a meeting with Aberdein in her parliamentary office on March 29, 2018, despite her claims that she first found out about the government’s investigation four days later. She said she recognised how “unlikely” it sounded that this meeting had slipped her memory.

Sturgeon did not inform the civil service of her dealings with Salmond until June 2018. She said doing so earlier could have been perceived as her trying to influence the investigation.

Hamilton was present at the April 2 meeting at her home and confirmed she “did offer to assist” him with her government’s investigation only to change her mind.

Sturgeon admitted she may have given him the impression she would step in to help him because she was trying to “let a long-standing friend and colleague down gently”. However, she said that “crucially” she had not stepped in.

A spokesman for Sturgeon said: “The First Minister today dismantled all of the claims which have been made against her. In fully eight hours of evidence, the opposition completely failed to substantiate any of the allegations and absurd conspiracy theories which have been levelled at her and her office in this case.”