A ‘disgusting’ man has been caught on CCTV kicking a 17-year-old cat against a wall in Newport.

The cat’s owner called the man cruel after she saw the video of the man going out out of his way to deliberately injure her pet.

The footage, recorded in Newport, Wales, shows two men walking down the hill, before one man spots the cat, which is sitting outside the house.

He adjusts his path and walks off the road and onto the pavement before kicking the cat over a foot into the wall.

Valerie Young, of Albert Terrace in Newport, said she saw what had happened on her tablet earlier this week before going outside to confront the two men who had passed by.

‘The cat is old now – she’s 17 – so she doesn’t go far, she only goes in the dingle next door and she was laying in the sun,’ said Valerie.

‘I saw the two men on the camera, but I didn’t take much notice. Then I saw what he had done. he’d kicked the cat up against the wall, literally kicked it against the wall.’ 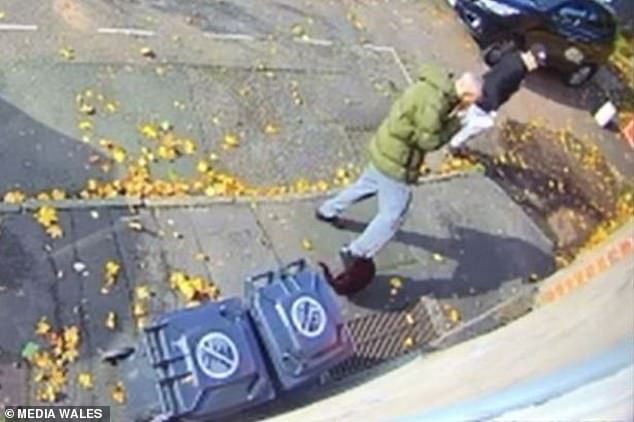 CCTV footage caught the moment a man in Newport, Wales, kicked a 17-year-old cat against a wall 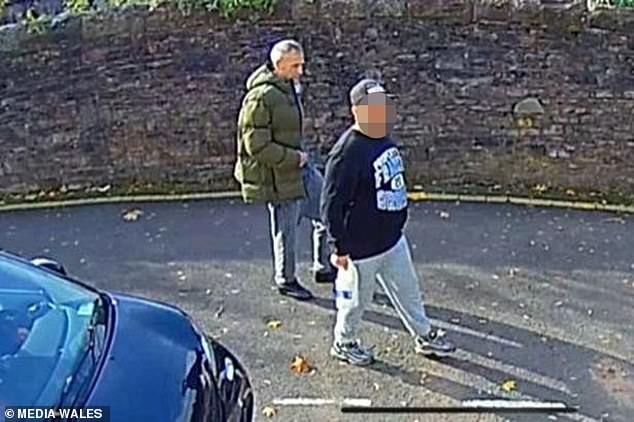 Valerie she has been carrying her cat around as its left paw was hurt in the incident – she will be taking her pet to the vets to assess the injury.

‘I walked to the end of the and I just shouted, “I know what you’ve done”,’ Valerie said.

‘It’s just dreadful, I don’t understand it. I’ve just been crying all day. I can’t see how people could be so cruel to a little cat. I think it’s absolutely disgusting. She was just lying in the sun, that’s all she was doing.’

The incident has been reported to the police, but it isn’t the first time Valerie’s cat has been hurt.

She said: ‘Years ago when I lived on the riverfront somebody took her eye out, cut all her whiskers and all her claws. So she’s not happy when she goes into a vets.’

Valerie added: ‘I never leave her. I never thought that laying in the sun outside her own front door that that would happen… It’s not only a cat, it’s a friend.’

Gwent Police has passed this information on to the RSPCA to investigate as an alleged act of animal cruelty.

A spokesperson for Gwent Police said: ‘We received a report from the Newport area at around 4.30pm, Wednesday 19 October, that a cat was kicked.

‘Anyone with information, including CCTV or dashcam footage, can call 101 or send us a direct message quoting log reference 2200354630.’