Striking DVLA staff led to 54,000 HGV licence backlog: Insider claims just ‘six staff were in Swansea HQ in pandemic’ after workers refused to return due to Covid safety fears – as trucker claims he’s been waiting a YEAR for approval

The DVLA is facing a 54,000 HGV driver backlog after just six staff worked inside its Swansea HQ during the pandemic, an insider has claimed.

The source said that workers refused to come back into the office despite being ordered to by bosses, because of worries over Covid.

When the insider visited the Swansea base, just six staff members were present, with the rest working remotely.

The DVLA base was previously in the headlines after reports this year that more than 500 cases of coronavirus were recorded there amid claims by employees that staff with symptoms were encouraged to return to work.

Some 6,000 workers are employed at the DVLA site in Swansea and 500 caught coronavirus in January, it was claimed.

The DVLA denied the reports and said they had staff in the office throughout the pandemic.

A spokesman also dismissed the source’s claims as being inaccurate.

News of the DVLA staff strike comes as chaos engulfs Britain’s petrol stations amid fuel supply issues triggered by a lack of HGV drivers.  The shortage has also led to some supermarkets being left with bare shelves.

Deep, a HGV driver, revealed that his licence expired about a year ago and he hadn’t been able to get a replacement despite repeated calls to the DVLA.

He said on LBC: ‘They want to have Europeans to come along and do our driving when we’ve got people in this country who are waiting to drive, waiting to do this stuff and they can’t. It takes forever.’ 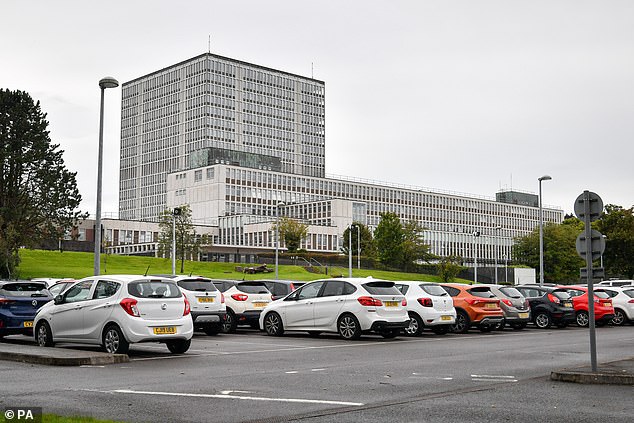 The Driver and Vehicle Licensing Agency (DVLA) in Swansea. It is claimed only six people were working there during the pandemic, driving the current HGV backlog 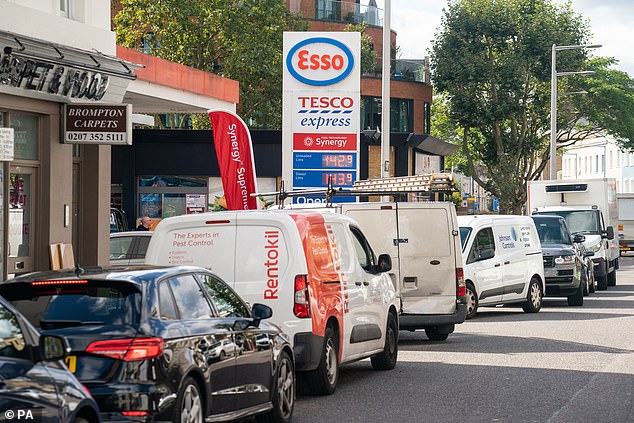 Vehicles queue for fuel at a petrol station in west London yesterday, as worries over fuel shortages continue

Deep eventually got through to someone at the DVLA through email – only to be told to ring the same number he’d been previously trying.

Another HGV driver said they’d ‘given up’ at the DVLA as ‘no-one answers’.

Kwasi Kwarteng’s warning came as retailers predicted a lack of HGVs and delivery drivers will hit supply chains and also force up prices by December. Trade association UK Hospitality has said that pubs and restaurants are facing disastrous staffing and supply problems that threaten their Christmas.

It came as the UK’s roads are clogged with drivers queueing for fuel because of a lack tanker drivers. In a string of crises for the country, soaring gas prices have hit millions in the pocket and a shortage of CO2 hurting the supply of food and drink.

The Government is introducing a temporary visa scheme that will see 5,000 HGV drivers and 5,500 poultry workers brought in for three-month contracts in an attempt to quell the fuel delivery issues and supermarket shortages.

Transport Secretary Grant Shapps said that the plan would help bring an end to the ‘100 to 200’ shortfall of fuel tanker drivers, adding that ministers are planning to train an additional 4,000 lorry drivers with the help of the Army to reduce the ‘bottleneck’ in HGV driving tests.

However, hauliers have warned that the fast-track trucker visas brought in the save Christmas are ‘too little, too late’ as the DVLA sets out to tackle a backlog of 54,000 HGV license applications that will take them at least two months to get through.

Ruby McGregor-Smith, president of the British Chambers of Commerce, compared the Department for Transport’s announcement to ‘throwing a thimble of water on a bonfire’.

She said: ‘Even if these short-term opportunities attract the maximum amount of people allowed under the scheme, it will not be enough to address the scale of the problem that has now developed in our supply chains.’

CEO of Scottish Food & Drink, James Withers, said: ‘We have been calling for emergency visas for weeks to avoid the collapse of some food supply chains.

‘I seriously doubt that 10,000 three month visas are going to cut it. It may help the driver situation a little, but it won’t address the chronic staff shortage in food production. At this stage, my instinct is that this is too little, too late to make a real difference to the Christmas trade.’ 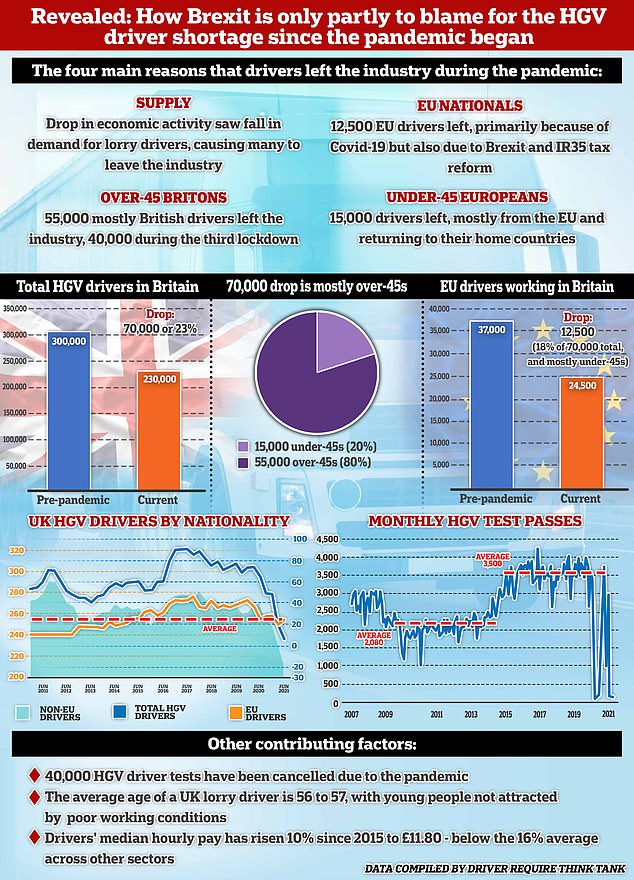 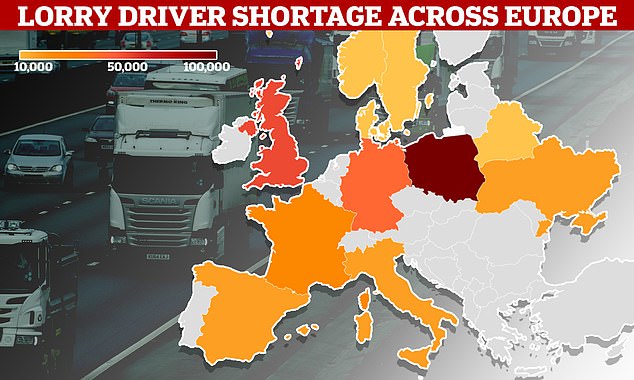 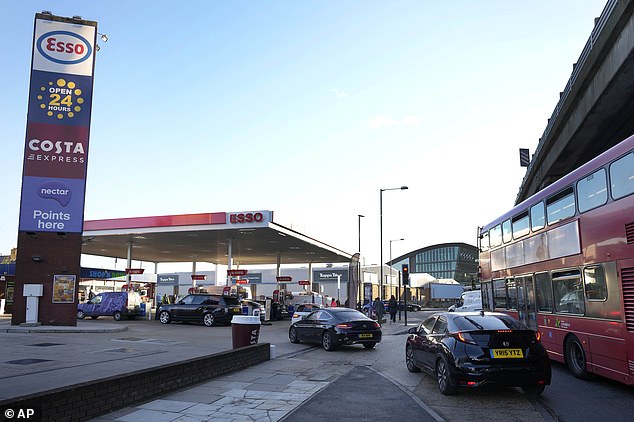 To make matters worse, lorry drivers from the EU are refusing to come to the UK – because they believe problems plaguing the supply chain are Britain’s own fault.

The Government has approved plans to bring in 5,000 foreign HGV operators to deal with the shortage, which has been blamed on a number of factors including the coronavirus pandemic and Brexit.

But promises of special visas and attractive pay – with some firms offering as much as £78,000 a year – have fallen on deaf ears, with one union boss declaring they ‘will not go to the UK for a short term visa to help UK out of the s**t they created themselves’.

And lorry drivers in this country are as equally disillusioned, with one who gave up the job after 30 years, likening they way they are treated ‘to being the lepers of society’.

Edwin Atema, Head of enforcement and research at the Dutch-based FNV union, which represents drivers across the EU and Europe said the UK had an enormous battle on its hands to woo foreign drivers back.

He said: ‘Pay is an important area but not the only area. People in Europe and across Europe have completely lost trust in this industry.

‘Before the coronavirus crisis and Brexit this industry was sick already. Plagued by expectation, by irresponsible multinationals who drag down prices, which ended up with drivers voting with their feet and leaving the industry.

‘The EU workers that we speak to will not go to the UK for a short term visa to help UK out of the s**t they created themselves.’

As the crisis continues to bits, Tesco warned customers to expect the return of panic buying in the run up to Christmas as bosses call on ministers to help end the lorry driver shortage.

The supermarket giant revealed it was currently suffering a shortfall of approximately 800 HGV drivers as it urged the Government to ease restrictions on foreign workers to help alleviate the supply chain crisis.

Despite being the UK’s largest supermarket chain, and offering new employees a £1,000 bonus since July, Andrew Woolfenden, Tesco’s distribution and fulfilment director, warned they were still unable to make up the lost numbers.