Student loan forgiveness will wipe out debt for one-third of borrowers: BofA

“Around one-third of borrowers have a student loan of $10,000 or less, with just over 50% having a loan of $20,000 or less, according to Department of Education data,” Bank of America said in a new report.

“Therefore, given the large number of households potentially eligible via income and the size of their debt, it appears many borrowers could see a large chunk of their total student debt forgiven.”

Under the Biden plan, the federal government will cancel as much as $20,000 in student debt for Pell Grant recipients whose loans are held by the U.S. Department of Education. Non-Pell Grant borrowers will get as much as $10,000 forgiven.

In addition to forgiveness, the administration is also capping some borrowers’ repayments at 5% of their monthly discretionary income.

The Department of Education estimates that nearly 90% of debt cancellation benefits will go to borrowers earning less than $75,000.

Bank of America’s work found that younger borrowers are likely to receive a larger benefit from any forgiveness, as student loans make up a larger percentage of these borrowers’ aggregate debt burdens.

“Arguably, what matters more from an economic perspective is the forgiveness relative to total debt, or indeed net wealth,” the report said. “Given debt tends to rise with age as people accumulate housing debt and other liabilities, the proportionate debt reduction is likely to be highest among the young.” 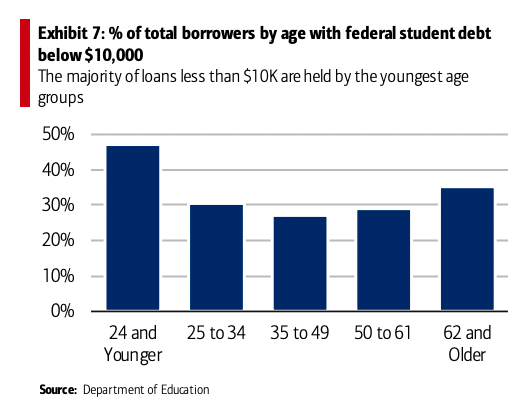 Overall, BofA finds debt forgiveness likely has a longer-term impact with respect to government spending rather than consumer habits.

An analysis by the Penn Wharton Budget Model team calculated that the package of forgiveness could end up costing taxpayers $500 billion, a small amount relative to the $16.2 trillion in total household debt outstanding at the end of Q2.

“Ultimately, the impact on the economy is also dependent on how the forgiveness of student debt affects the total envelope of government debt and deficits over time,” the report said.