Follow
Home » World News » Suitcases of cash, diamond tiaras and Hollywood: What is the 1MDB scandal?

A massive financial scandal linked to a wealth sovereign fund owned by Malaysia’s Ministry of Finance helped sink former prime minister Najib Razak’s political career and end the six-decade rule of his coalition at the 2018 national elections. On Wednesday, his appeal against a corruption conviction and 12-year jail term handed down last July was rejected by the country’s second-highest court, the Court of Appeal.

He remains the only person so far convicted and sentenced to jail in the fallout of what has been called one of the world’s biggest corruption scandals. It is certainly one of the most lurid, in which money meant for economic development was used for lavish spending on everything from diamond tiaras to private jets to Hollywood movies.

Who is Najib Razak?

The son of former Malaysian prime minister Abdul Razak, Najib, now 68, served as prime minister from 2009 to 2018, leading the Barisan Nasional (National Front) coalition, which was dominated by his party, the United Malays National Organisation, known as UMNO. 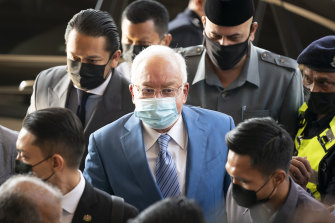 In the wake of the corruption scandal, he was voted out of office on May 9, 2018, ending the Barisan Nasional’s six-decade rule, and was replaced by former long-term prime minister Mahathir Mohammed.

Najib was then barred from leaving Malaysia and in July 2018, he was charged with various crimes connected to the scandal. He was found guilty of all seven charges in July 2020.

What is the 1MDB scandal?

1Malaysia Development Berhad (1MDB) is a now-insolvent wealth fund set up in 2009 to invest in the country’s economic development. It was owned by the Ministry of Finance and chaired by Najib as prime minister.

Since 2015, the company has been the focus of one of the world’s biggest corruption investigations across several jurisdictions, including the United States, Malaysia and Indonesia.

A report by The Wall Street Journal in July 2015 alleged that nearly $US700 million ($980 billion) of 1MDB money has been channelled into Najib’s personal bank accounts. Najib denied the allegations and sacked the attorney-general investigating him.

The US government believes that more than $US4.5 billion ($6.3 billion) was stolen from the fund and siphoned through accounts in the US, Singapore and Switzerland.

By August 2021, approximately $US1.2 billion of 1MDB funds spent within US jurisdiction had been returned to Malaysia.

What was the money spent on?

Najib is alleged to have used the funds to pay off politicians, cover his credit card bills and underwrite his wife Rosmah Mansor’s lavish shopping habits.

Six properties connected to Najib and Rosmah were raided by police in what was billed as the biggest seizure in Malaysian history, recovering goods worth between $US223 million and $US273 million. Goods seized as evidence included 284 boxes of designer handbags, 72 suitcases stuffed with about $28 million in cash in several currencies and12,000 pieces of jewellery (including 14 tiaras). 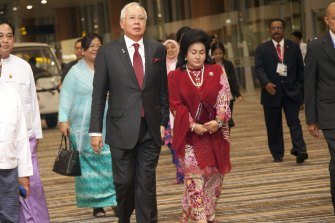 What is the Wolf of Wall Street connection?

Malaysian businessman Low Taek Jho, known as Jho Low, had no official position with 1MDB, but as a consultant is accused of using the fund to bankroll the Martin Scorsese film Wolf of Wall Street, starring Leonardo DiCaprio, based on the true story of high-flying stockbroker brought low by corruption.

The film’s production company, Red Granite, which was co-founded by Najib’s stepson Riza Aziz, agreed in 2018 to pay back $US60 million to the US government after the scandal was exposed, while maintaining the accusations were false. 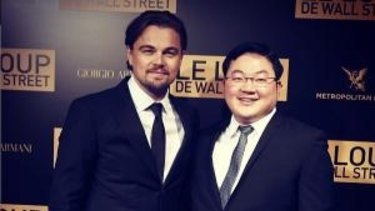 Leonardo Dicaprio and Jho Low at the 2013 premier of The Wolf of Wall Street.

Red Granite became a Hollywood player after it stumped up $US100 million to help Scorsese make the movie. The company also bought DiCaprio the best actor Oscar won by Marlon Brando for On the Waterfront estimated to be worth $US600,000, and artworks by Pablo Picasso, Jean-Michel Basquiat, and Diane Arbus. The star has since handed the statue and the artworks to the authorities.

As well as investing in other movies, such as Dumb and Dumber To, Jho Low is accused of spending billions on his opulent lifestyle, including Beverley Hills mansions, a Manhattan apartment once owned by Beyonce and Jay Z, a $US35-million jet, a $260-million yacht and $8 million in diamonds for Australian model Miranda Kerr.

Jho Low is currently an international fugitive facing charges in Malaysia and the US, believed to be living in Macau, China. His lawyers periodically post protestations of his innocence on jho-low.com.

Najib’s legal team have told the court they will appeal the verdict in the Federal Court. He received a stay on his sentence on Wednesday, on the same 2-million-ringgit bail conditions as before.

Najib is expected to try to return as prime minister if his appeal is successful and he manages to beat the other 35 charges he faces.

Wednesday’s finding would put paid to these ambitions in most nations, but Najib is nothing if not dogged, and his party still enjoys enormous support, winning 75 per cent of the seats in the last election.