When Luis Montero was 16 he was so desperate for somewhere to stay he slept in a tent in Yarra Bend Park.

“It was terrifying, it was cold as well and there were a lot of loud noises. There is just a flimsy piece of material that keeps you away from the world,” he says. 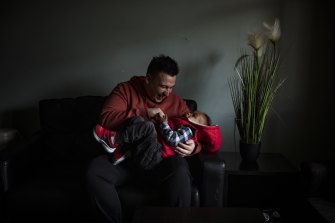 When Mr Montero went to get food he returned to find the tent slashed and its contents stolen.

Mr Montero, who was working as a cook at the time, found crisis accommodation at a refuge for a night or two but when he tried to find something longer term there was always a problem.

“I had dropped out in year nine … it’s difficult to fill out all these forms by yourself, especially when you haven’t done it before,” he says.

“There was always something I didn’t have – my ID wasn’t sorted or my income wasn’t regular enough because I worked as a casual, just a bunch of obstacles in my way.”

Homelessness organisations warn that young homeless people are falling through the gaps, with many existing homelessness services geared towards adults.

Melbourne City Mission chief executive Vicki Sutton said a quarter of Victoria’s homeless population were aged between 12 and 24, with 6000 having no safe place to sleep each night.

“Despite the alarming number of young people seeking help from homelessness services, they make up only 2.9 per cent of main tenants in current models of social and public housing,” Ms Sutton says.

She says young people – who receive lower minimum wages and Centrelink payments than adults – are often priced out of social housing.

And often they don’t have the life skills and maturity to maintain a tenancy and need more support than housing alone. 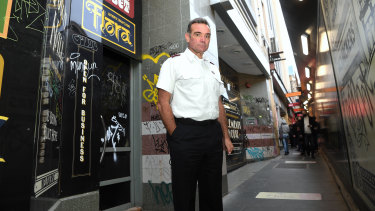 An estimated 6000 young people aged between 12 and 24 are homeless in Victoria, and the Salvation Army’s Brendan Nottle says they are offered less support than adults. Credit:Justin McManus

Melbourne City Mission and the Salvation Army are calling on the Victorian government to set aside for young people a proportion of the 12,000 homes to be built in four years under its $5.3 billion Big Build social housing budget commitment.

Major Nottle said homelessness services were often concerned about the safety of young people if they mixed with adults “but it’s the young person who ends up as the one who loses out”.

“I am also concerned about the distinct lack of housing options for young people and support to go with that to help address the trauma many have experienced,” Major Nottle said.

He said he would like to see an expansion of the Community of Schools and Services model, which was piloted by three schools in Geelong.

This pilot led to a 40 per cent reduction of homeless school-aged people in Geelong and a 20 per cent decline in at-risk students dropping out of school early.

McAuley Community Services for Women chief executive Jocelyn Bignold said young people – many of whom were homeless due to family violence – often did not have enough income to cover rent.

“Social housing is often 70 per cent of market rent, and they can’t afford that,” she said.

“You might not want to put someone in public housing for the rest of their life, but we must provide the right housing and support to see a vulnerable young person through the difficult phase of transition to adulthood,” she said.

“We haven’t yet implemented enough examples of models that a number of organisations like City Mission have developed.”

Mr Montero believes longer term support, such as mental health and drug and alcohol services and some stability in his life, would have really helped when he was 16.

“I remember I stayed at a hostel for two nights and it was 19 people in the one big room,” he says.

Now 21, Mr Montero says it was only when he had a son two years ago that he was prioritised for transitional housing, which has allowed him to go back to school to complete his Victorian Certificate of Applied Learning.

“If I didn’t have my son I would still be doing the same thing,” he said.

Housing Minister Richard Wynne said the government’s support for young people was designed to break the cycle of homelessness, and prevent a lifetime of disadvantage.

“This support includes youth foyers, that pair housing with support, work and education to get young people off to the best start in life, housing and support packages for young people leaving care and justice settings, and a youth refuge system designed to help young people in crisis get back on their feet,” he said.

a, And, cold, Lot, of, terrifying
You may also like:

Who was Jackass star Patty Perez and how did she die?

Fresh appeal to find torso in the Thames killer

Brits vaccinated with AstraZeneca's Covid jab will be allowed into US

Household transport emissions fell by a QUARTER in 2020

Man, 65, dies as suicidal jumper lands on him after plunging from apartment block

Two dead after man jumps from New York building, strikes another person below