The Kremlin backs Serbia's deployment of troops on Kosovo border

Russia and Germany face off over new European flashpoint: The Kremlin backs Serbia’s deployment of troops on Kosovo border as Germany warns Belgrade it is ‘unacceptable’

‘Russia is very closely following what is happening and how the rights of the Serbs are ensured,’ Kremlin spokesman Dmitry Peskov told reporters, in direct contravention with a statement from the German foreign ministry that Serbian troop buildup is ‘unacceptable’.

‘We support Belgrade in all the actions that are being taken,’ Peskov said, but added that ‘Serbia is a sovereign country and it is fundamentally wrong to look for some kind of destructive influence of Russia here’.

Kosovo declared independence from Serbia in 2008, but Belgrade has refused to recognise it and encouraged Kosovo’s 120,000 ethnic Serbs to defy Pristina’s authority – especially in the north where they make up the majority. 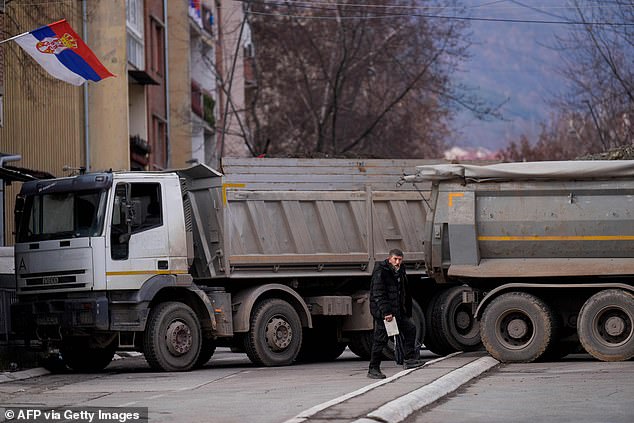 A pedestrian walks past a new road barricade set up in the divided town of Mitrovica in northern Kosovo on December 28, 2022 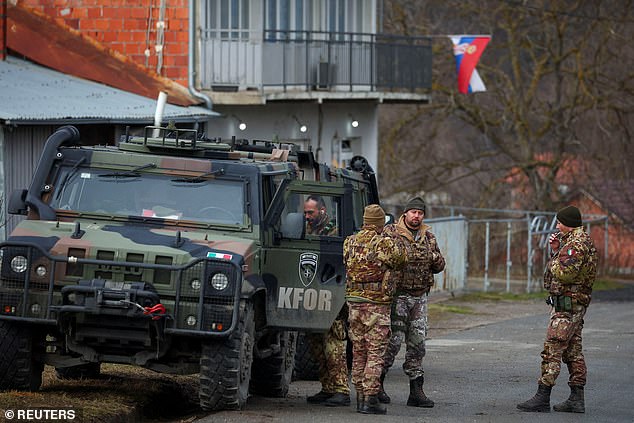 Members of the Italian Armed Forces, part of the NATO peacekeepers mission in Kosovo, stand guard near a roadblock in Rudare, near the northern part of the ethnically-divided town of Mitrovica, Kosovo, December 28, 2022

President Aleksandar Vucic on Monday put Serbian armed forces on ‘the highest level’ of alert and ordered the special armed forces to be beefed up.

The orders came after army chief General Milan Mojsilovic was dispatched to the border with Kosovo on Sunday.

The Serbian army has been put on a heightened state of alert over tensions with Kosovo multiple times in recent years – the last time in November after claiming that several drones entered Serbian airspace from Kosovo.

On December 10, Serbs in northern Kosovo set up barricades to protest against the arrest of an ex-policeman suspected of being involved in attacks against ethnic Albanian police officers.

This prompted weeks of tense standoffs, punctuated by gunfire and explosions near NATO-led peacekeepers’ patrols and journalists.

Though no one has been seriously injured or killed, Serbia justified its decision to raise the combat readiness of its troops on the border to its highest level and demanded an end to ‘attacks’ against Kosovo Serbs.

It was not immediately clear whether the former policeman’s transfer to his home would defuse the tensions since Kosovo Serbs and Belgrade have issued several other demands, including the release of two other Serbs and a ban on Kosovo police entering the Serb-populated areas of northern Kosovo. 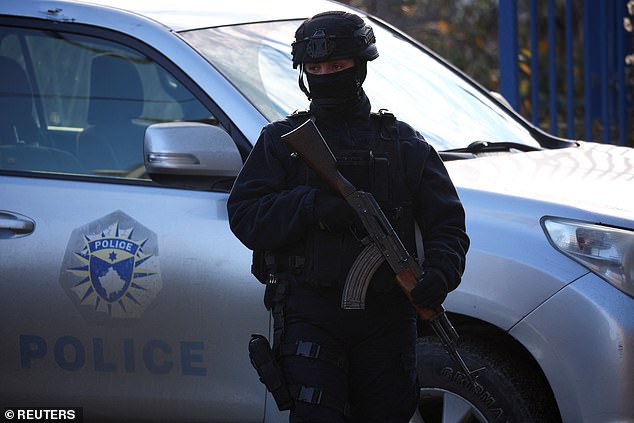 A Kosovo police officer patrols in the northern part of the ethnically-divided town of Mitrovica, Kosovo, December 28, 2022 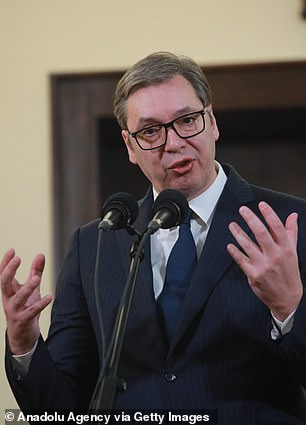 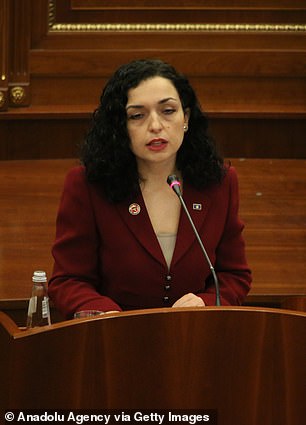 Kosovo meanwhile has asked NATO-led peacekeepers stationed there to remove the barriers and hinted that Pristina’s forces would do it if the peacekeeping force did not react.

German foreign minister Christofer Burger on Wednesday called on Serbs in Kosovo to remove the barricades set up after Kosovar authorities blocked Serbian Patriarch Porfirije from entering the country ahead of Orthodox Christmas celebrations.

‘We are very concerned about these tensions in northern Kosovo. The barricades erected illegally by Kosovo Serbs must be dismantled as soon as possible,’ Burger told journalists in Berlin.

‘Nationalist rhetoric in particular, such as we have heard from Serbia in recent weeks, is completely unacceptable, and the increase in military presence near the Serbian border with Kosovo sends the completely wrong signal. That is why we expect a constructive approach from Serbia,’ he said.

But in a post on social media, Vucic said: ‘We are doing all in our power to preserve peace and stability. Unfortunately, they did not want to listen to us, or they were not very interested in hearing us, but they will continue to talk about the Serb barricades, which are a sign of discontent and of the Serb people’s struggle to be where they belong.’ 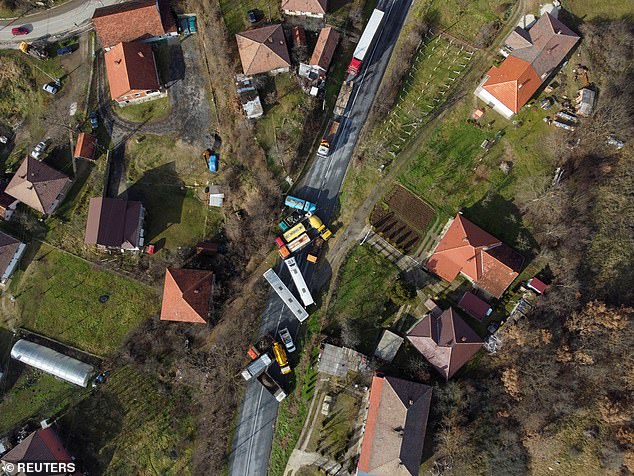 A roadblock is seen in Rudare, near the northern part of the ethnically-divided town of Mitrovica, Kosovo, December 28, 2022 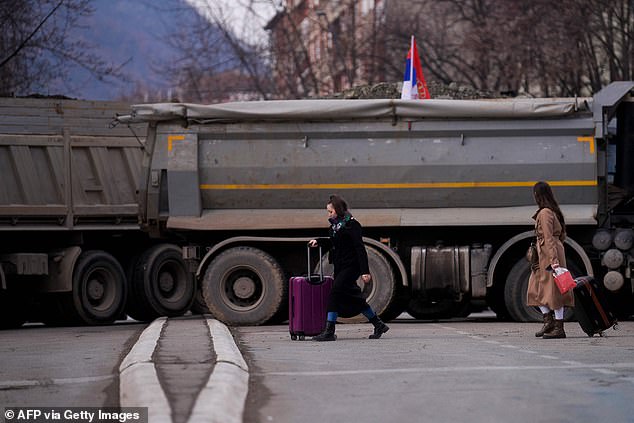 Pedestrians walk past a new road barricade set up in the divided town of Mitrovica on December 28, 2022

Both Kosovo and Serbia intend to join the European Union and have agreed, as part of that membership process, to resolve their outstanding issues and build good neighbourly relations.

But the latest tensions suggest there is still much work to be done if the standoff is to be resolved.

Kosovo won independence from Serbia in 2008, almost a decade after a guerrilla uprising against Belgrade’s rule.

Serbia, however, still considers Kosovo to be an integral part of its territory and rejects suggestions it is whipping up tensions and conflict within its neighbour’s borders. Belgrade accuses Pristina of trampling on the rights of minority Serbs.

Ethnic Serbs, who do not recognise the Pristina government or Kosovan state institutions, account for 5 per cent of Kosovo’s 1.8 million people, with ethnic Albanians making up about 90 per cent.

The Serbs have vented their hostility by refusing to pay Kosovo’s power operator for the electricity they use for example and frequently attacking police who try to make arrests. 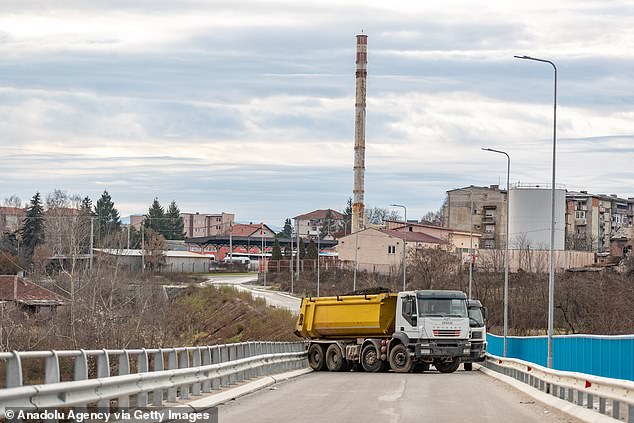 Barricades set up with trucks are seen in Mitrovica, Kosovo on December 28, 2022 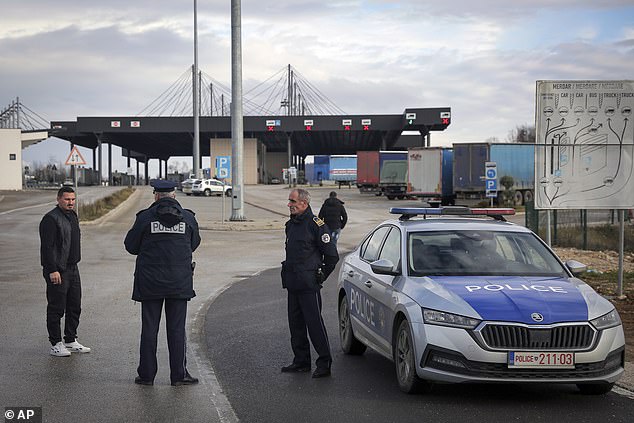 Fresh ethnic tensions have erupted since December 10 when Serbs erected multiple roadblocks and exchanged fire with police after the arrest of a former Serb policeman for allegedly assaulting serving police officers during a previous protest.

The stand-off comes after months of trouble over the issue of car licence plates. Kosovo has for years wanted the approximately 50,000 Serbs in the north to switch their Serbian car license plates to ones issued by Pristina, as part of the government’s desire to assert authority over its territory.

On July 31, Pristina announced a two-month window for the plates to be switched over, triggering protests, but it later agreed to push the implementation date back to next year.

Ethnic Serb mayors in northern municipalities, along with local judges and some 600 police officers, resigned in November in protest at the looming switch.

Serbs in Kosovo want to create an association of majority-Serb municipalities that would operate with greater autonomy. Serbia and Kosovo have made little progress on this and other issues since committing in 2013 to the EU-sponsored dialogue.

NATO has about 3,700 troops stationed in Kosovo to maintain the peace.

The alliance said it would intervene in line with its mandate if stability in the area was jeopardised.

The European Union Rule of Law Mission in Kosovo (EULEX), which arrived in 2008, still has around 200 special police officers there.