Washington: Donald Trump was well aware of the potential for violence on January 6 as he tried to subvert the 2020 election and even wrestled with his Secret Service in a bid to join supporters as they descended on the Capitol that day, a former White House aide has testified to Congress.

In another explosive hearing into last year’s riot, Cassidy Hutchinson, a former top aide to Trump’s chief of staff Mark Meadows, said that the former president knew his supporters had weapons and body armour when he asked them to march to the Capitol building. 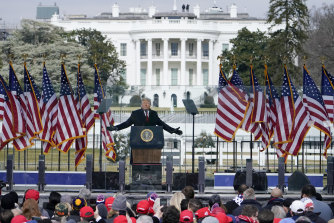 The White House in the background, then president Donald Trump speaks at a rally before a mob invaded the US Capitol on January 6, 202Credit:AP

“I don’t effing care that they have weapons, they’re not here to hurt me,” Hutchinson told the committee Trump said before addressing his rally, furious that the Secret Service was screening people for guns, spears and other weaponry.

“Take the effing mags (metal detectors) away. Let my people in – they can march to the Capitol from here.”

After the rally, Hutchinson testified, Trump was in the presidential car and tried to wrestle the steering wheel from his security guard, Bobby Engel – and then even lunged at Engel’s neck – after being informed they would be returning to the West Wing instead of the heading to the Capitol where Biden’s victory was going to be certified. 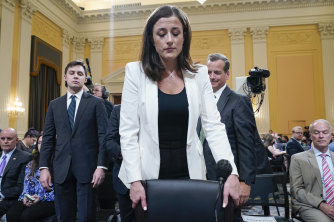 “The president said something to the effect of: ‘I’m the effing president. Take me up to the Capitol now’,” Hutchinson said, “to which Bobby responded: ‘Sir we have to go back to the West Wing’.

“The president reached up towards the front of the vehicle to grab at the steering wheel. Mr Engel grabbed his arm and said: ‘Sir, you need to take your hand off the steering wheel, we’re going to back the West Wing; we’re not going to the Capitol’. Mr Trump then used his free hand to lunge at Bobby Engel.”

Hutchinson appeared before the January 6 select committee on Tuesday (US time) as part of a surprise last-minute hearing to detail critical moments before and during last year’s deadly attack on Congress.

The committee was not expected to hold another public session until mid-July, but announced on Monday, with less than 24 hours notice, that it would return to Capitol Hill “to present recently obtained evidence and receive witness testimony.” 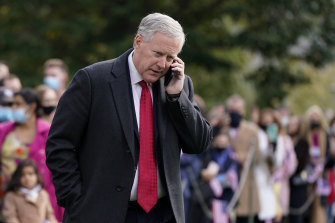 Former White House chief of staff Mark Meadows has provided some of his phone records to the committee investigating the US Capitol riots.Credit:AP

Hutchinson’s evidence is significant because she is one of the committee’s closest links to Meadows, who stopped cooperating with the January 6 committee shortly after turning over thousands of text messages last year.

She revealed today that he, along with former Trump lawyer Rudy Giuliani, have asked for pardons over the Capitol attack, adding their names to a list of other Republicans who had also reportedly sought pardons, including far-right Congressman Matt Gaetz, Pennsylvania’s Scott Perry and representatives Louie Gohmert and Andy Biggs.

As Meadow’s aide, her office was seconds from the Oval Office, and she was often present for critical White House meetings and conversations where challenges to the election were debated and discussed.

One conversation took place on January 2, after a meeting between Meadows and Giuliani, in which she said Giuliani told her: “We’re going to the Capitol. It’s going to be great.”

Later, when she asked Meadows what Giuliani meant Meadows replied: “things might get real, real bad” on January 6.

Hutchinson testified that she became “scared, and nervous for what could happen” as the day neared. Those fears intensified following conversations with White House counsel Pat Cipollone on January 3, who had warned her that if Trump were to go to the Capitol on January 6: “We’re going to get charged with every crime imaginable.”

“We need to make sure that this doesn’t happen, this would be a really terrible idea for us. We have serious legal concerns if we go up to the Capitol that day,’” Hutchinson recounted Cipollone saying.

She also recalled Meadows telling Cipollone about the rioters chanting “Hang Mike Pence!” and of Trump reportedly declaring that Pence – who refused to block Biden’s victory that day –“deserves it.”

She testified how Trump was so enraged by an interview his then-Attorney General Bill Barr gave to the Associated Press saying there was no evidence of election fraud that he threw his lunch at the wall. “I first noticed there was ketchup dripping down the wall, and there was a shattered porcelain plate,” she said.

Hutchinson told the committee: “There were several times throughout my tenure with the chief of staff that I was aware of [Trump] either throwing dishes or flipping the tablecloth to let all the contents of the table go onto the floor and likely break or go everywhere.”

Today’s hearing was the sixth public hearing by the January 6 committee so far. In each session, the committee has sought to make the case that Trump had a complex plan to remain in power despite knowing his actions were illegal, and was the person who essentially “lit the fuse” for the deadly attack on the Capitol last year.

Much of this was based on an elaborate scheme to overturn the 2020 election, which involved assembling a group of pro-Trump electors in key battleground states who could replace genuine Electoral College electors.

These slates of fake electors would then create phoney certificates for Trump that would be transmitted to Washington for counting during the joint session of Congress on January 6.

Trump has consistently denied wrongdoing, however, and during Hutchinson’s testimony today, he posted on his social media website, Truth Social, that she was “bad news!”

“I hardly know who this person, Cassidy Hutchinson, is, other than I heard very negative things about her (a total phony and ‘leaker’), and when she requested to go with certain others of the team to Florida after my having served a full term in office, I personally turned her request down,” Trump wrote.

“Why did she want to go with us if she felt we were so terrible? I understand that she was very upset and angry that I didn’t want her to go, or be a member of the team. She is bad news!”