Ukraine dares to dream it has reached the turning point: Russian troops surrender en masse as they realise ‘hopelessness of their situation’ amid Kyiv’s lightning counter-offensive

Russian troops have surrendered en masse in the face of a rapid Ukrainian counter-attack that is continuing to gain ground today, leading some to hope that a turning point in the war has finally been reached.

Kyiv’s military intelligence said large numbers of Moscow’s soldiers had laid down their weapons rather than fight troops advancing east out of Kharkiv because ‘they understand the hopelessness of their situation’.

Oleksiy Arestovich, adviser to Ukrainian President Volodymyr Zelensky, said the military has captured so many Russian soldiers over the last several days that it is running out of space to house them – with military intelligence spokesman Andrey Yusov adding that ‘significant’ numbers of Russian officers are among them.

Meanwhile, Russian troops fighting a second counter-attack in the southern Kherson region were said to be negotiating their own surrender having apparently run out of ammunition – though details from the frontline are sparse amid an information blackout imposed by Kyiv. 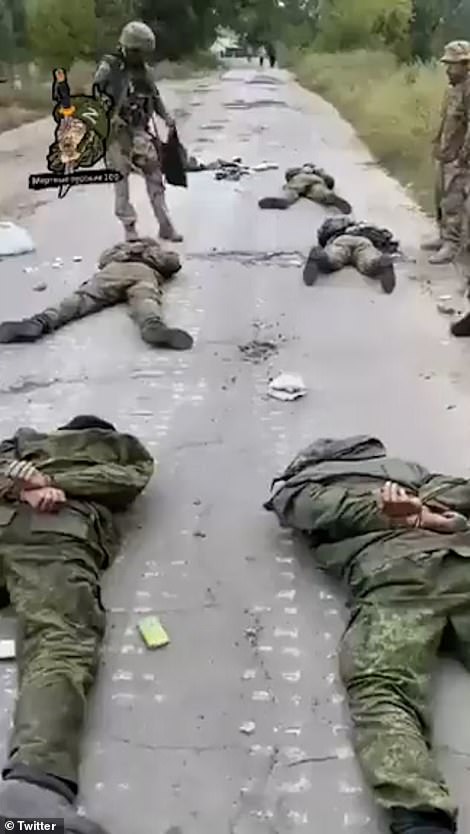 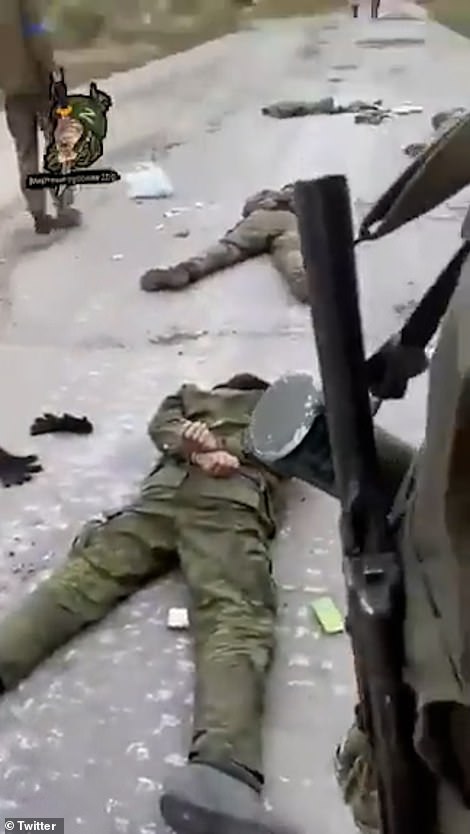 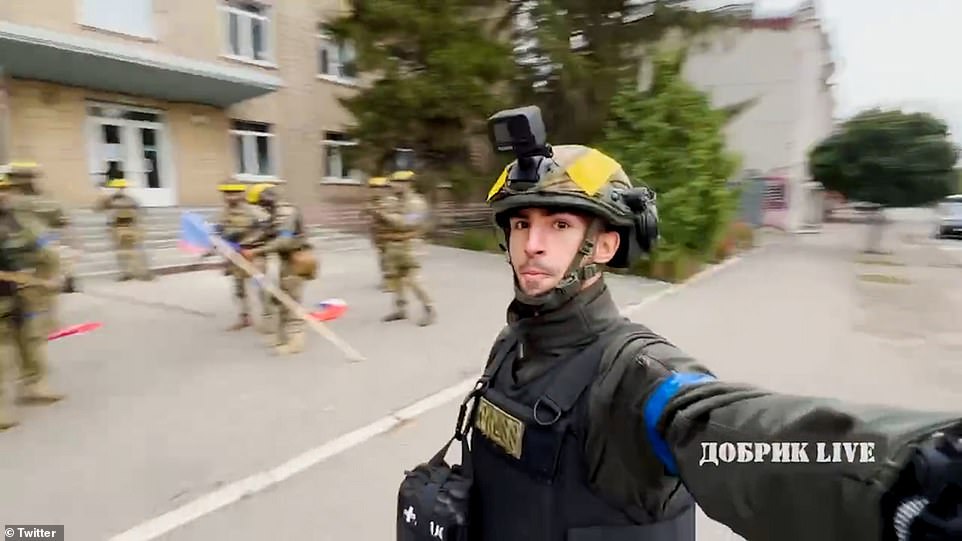 Ukrainian troops are continuing to take ground in both the north and south of the country, President Zelensky has said, as he called on the West to keep supplying weapons (pictured, Ukrainian forces in Vovchansk) 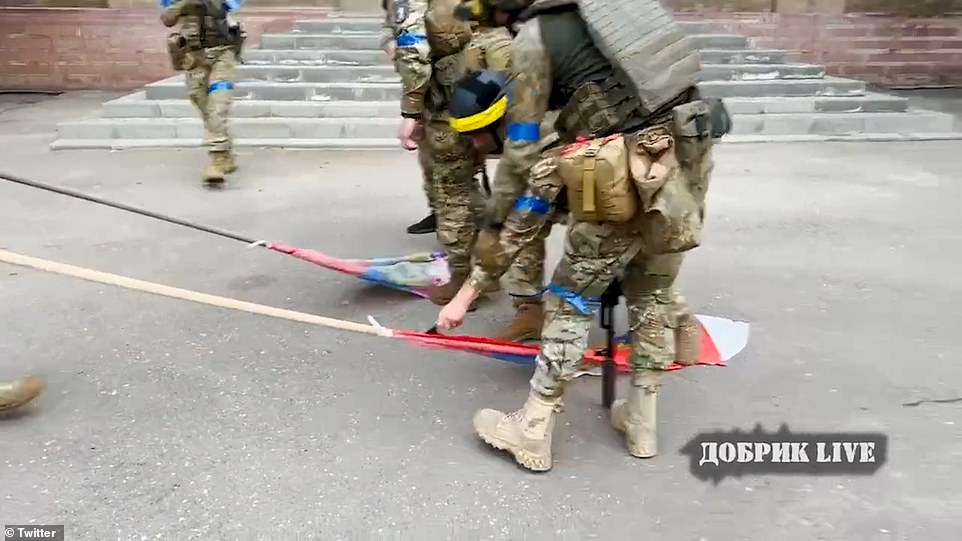 Soldiers taking part in the Kharkiv counter-attack rip down Russian flags in the city of Vovchansk, which sits close to the Russian border, as they take back territory from Putin’s troops 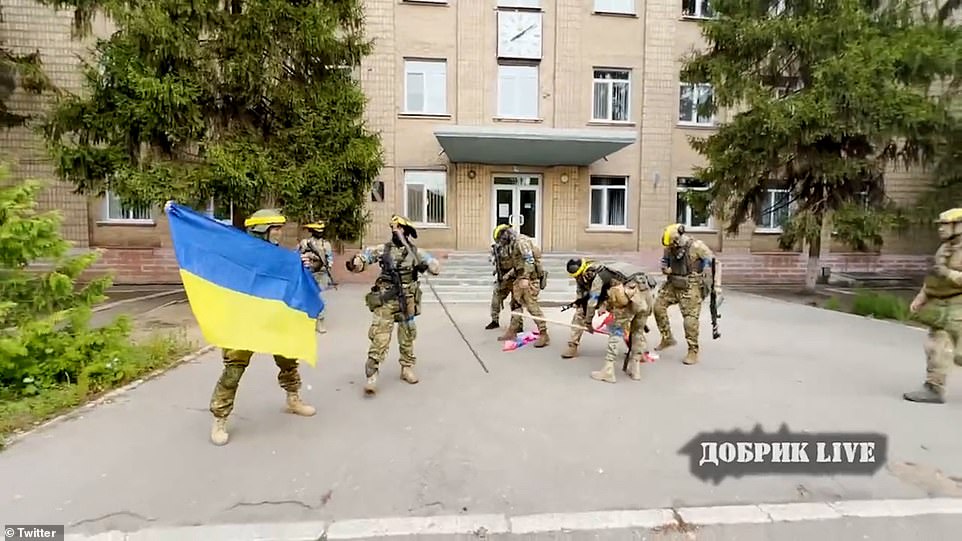 The Ukrainian flag is raised over the city of Vovchansk, which has been under Russian control since the early days of the war, as soldiers push Putin’s forces back across the border 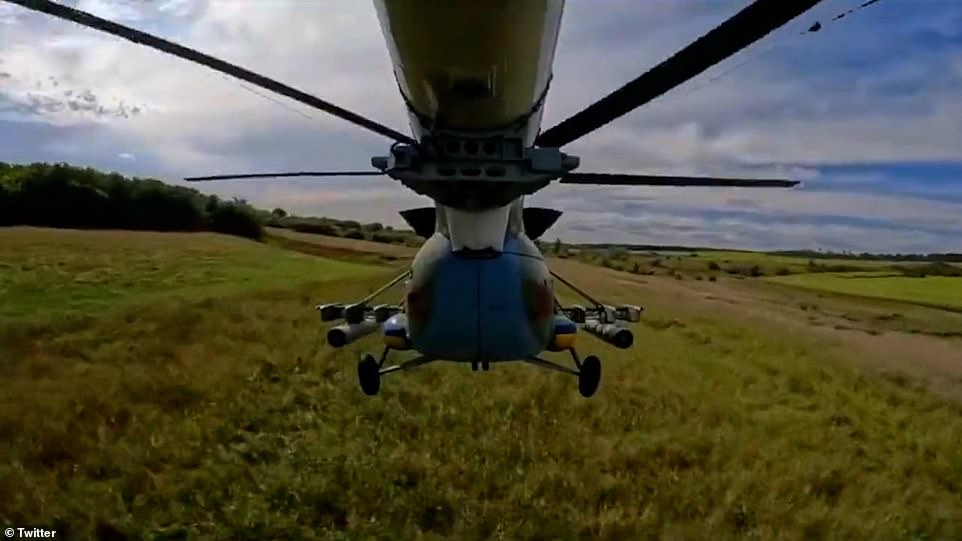 A Ukrainian helicopter carries out attacks in the east of the country while flying at very low altitude, as the military looks to press its advantage after cutting Russian supply lines 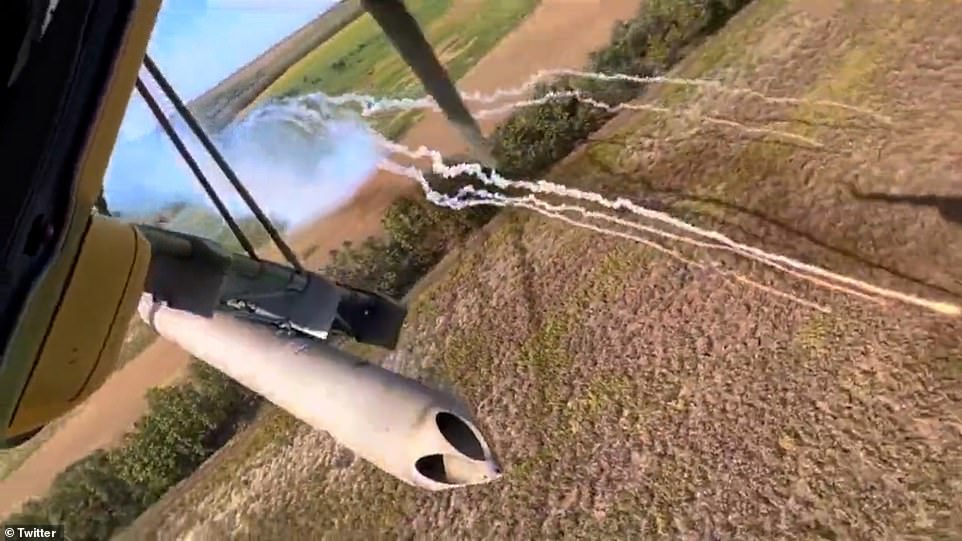 Flares are fired from a Ukrainian helicopter firing at Russian positions in the east of the country, as Kyiv’s men look to press the advantage after a stunning counter-attack in the north

An ominous warning has come from Russia’s top churchman that the time has come to pray for Putin.

Russia is in ‘a time of anxiety’ which is ‘very disturbing’, according to recent comments by the normally staunchly pro-Kremlin Patriarch Kirill.

‘Now the time has come that we must pray stronger than ever for our Fatherland, for our President, for our army, so that the country has strength to maintain its true independence,’ he said.

It comes after Ukraine scored a stunning victory against the Russian armed forces by routing them near the city of Kharkiv, leading some to hope that a turning point in the war has been reached.

‘I want to say one more time that we live in a very difficult time,’ the patriarch continued.

‘So our prayer today is special, we pray for the head of our state, the Supreme Commander Vladimir Putin who bears very special responsibility.

‘We also pray for all war commanders and those in power.

‘So that Lord gives them wisdom and strength, protects them from sins and mistakes, and inspires them to actions that would protect our Fatherland from every outside threat.’

This included ‘even perhaps the most dangerous and terrible threats’, he said at the Danilov Monastery in Moscow.

The influential Kirill did not make clear what ‘sins and mistakes’ he meant but urged, echoing Putin: ‘We must pray that all dangers will pass our Motherland, so that those who dream of crushing Russia as an independent, truly independent state, will be left with nothing.

‘Russia does not depend on any centres of power that are outside its sovereign territory.

‘This is a great privilege, but it is also a huge cross, because there are always those who would like to bring such a rich, strong country as Russia into the orbit of their influence.’

Russia has a ‘special historical path’ and a ‘worldwide fateful mission’, he said.

‘Today this special mission is returning and placed on the shoulders of our people.’

Zelensky, speaking in a late-night address, said Ukraine’s armies had captured a total of 2,300 square miles in the east and south since the beginning of September – an area about four times the size of Greater London – as he called on Western allies to supply more weapons to help consolidate the gains.

Ukraine and the West must ‘strengthen cooperation to defeat Russian terror’, he said, while calling specifically for air defence systems to help protect civilian areas that Putin’s commanders have begun targeting as ‘revenge’ for their battlefield defeats – blowing up power stations in the city of Kharkiv on Monday.

Zelensky described the strikes as ‘a sign of the desperation of those who invented this war.’

He added: ‘This is how they react to the defeat of Russian troops in the Kharkiv region. They can’t do anything to our heroes on the battlefield and that’s why Russia is directing its vile strikes against civilian infrastructure.’

Russia invaded Ukraine on February 24 with the aim of carrying out a days-long ‘special military operation’ to bring the country back under the Kremlin’s sway, but was dealt a humiliating defeat around Kyiv and fled.

Putin’s commanders refocused and stated the new goal was to fully ‘liberate’ the eastern Donbas region, where it was hoped the open countryside and closer proximity to Russia would help bring greater success.

What followed was months of bloody attritional warfare that saw both sides suffer huge casualties while Russia made slow but steady advances under withering artillery fire.

But as that advance slowed Ukraine – which had taken time to recruit and train new soldiers, and equip them with newly-supplied Western weapons – launched a long-awaited attack to reclaim the southern city of Kherson.

Moscow hastily moved troops south to defend it, opening the door to a second attack east out of Kharkiv which succeeded in smashing through Russian frontlines and caused troops to flee the entire region.

As the tide of war shifted back in Ukraine’s favour, the mood across the country turned from one of bitter endurance to one of jubilation.

In Kharkiv, authorities hailed that power and water had been restored to about 80% of the region’s population following Russian attacks on infrastructure that knocked out electricity in many places across Ukraine.

‘You are heroes!!!’ Kharkiv mayor Ihor Terekhov wrote on Telegram, referring to crews who restored utilities in Ukraine’s second-biggest city.

‘Thanks to everyone who did everything possible on this most difficult night for Kharkiv to normalise the life of the city as soon as possible.’

Meanwhile in Russia, signs of disarray emerged as Russian military bloggers and other commentators chastised the Kremlin for failing to mobilise more forces and take stronger action against Ukraine.

Russia has continuously stopped short of calling its invasion a war, instead describing it as a ‘special military operation’ and relying on a limited contingent of volunteers instead of a mass mobilisation that could spur civil discontent and protest.

Ramzan Kadyrov, the Moscow-backed leader of the Russian region of Chechnya, publicly criticised the Russian Defence Ministry for what he called ‘mistakes’ that made the Ukrainian blitz possible.

Even more notable, such criticism seeped onto state-controlled Russian TV.

‘People who convinced President Putin that the operation will be fast and effective… these people really set up all of us,’ Boris Nadezhdin, a former parliament member, said on a talk show on NTV television.

‘We’re now at the point where we have to understand that it’s absolutely impossible to defeat Ukraine using these resources and colonial war methods.’

Some in Russia blamed Western weapons and fighters for the losses.

‘It’s not Ukraine that attacked Izium, but NATO,’ read a headline in the state-supported Komsomolskaya Pravda newspaper, referring to one of the areas where Russia said it has withdrawn troops.

Elsewhere, residents of a Russian village just across the border from Ukraine were evacuated after shelling by Ukrainian troops killed one person, according to Russia’s Tass news agency.

The report cited the head of the local administration in Logachevka, who said Ukrainian troops opened fire at a border checkpoint.

Pro-Kremlin separatists reported that Ukrainian troops were approaching the town of Lyman, a rail hub captured by Russia in late May that offers access to bridges over the nearby Siversky Donets river.