Singapore: For days, as Indonesia’s hospitals have buckled, oxygen has run low and COVID-19 infections and deaths have soared to record levels, the Indonesian President’s point man on the crisis engulfing Australia’s near neighbour has insisted there is no need to panic.

“Everything is under control,” said senior minister Luhut Binsar Pandjaitan, Joko Widodo’s most trusted lieutenant on Monday, the day after 33 patients died in a hospital in Yogyakarta while its oxygen supply was depleted. 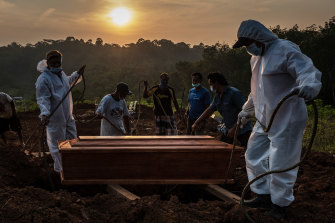 The message has been maintained as space in intensive-care units has been exhausted, emergency tents have been erected and as hundreds have died at home.

As the outbreak accelerates in the world’s fourth most populous country, however, there is an acceptance now that help from outside may be needed.

Fearing worse to come as new cases peaked again at 31,189 on Tuesday, Indonesia has reached out to China, Singapore and “other sources” to flag that it may need assistance from abroad.

“I hope nobody underestimates [us], saying Indonesia cannot solve these problems,” Luhut said on Tuesday as as Indonesia recorded 728 more deaths, another record, bringing its overall toll to 61, 868. 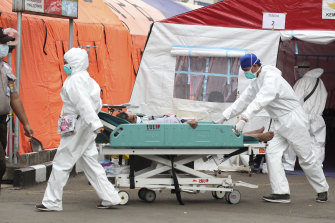 Paramedics roll a man on a hospital bed past emergency tents erected to accommodate a surge of COVID-19 patients at a hospital in Bekasi, on the outskirts of Jakarta.Credit:AP

Where Australia fits into that picture is yet to be determined.

Yes, Australia has COVID problems of its own, as lockdowns roll on and citizens are stranded, but the unfolding disaster to the north demands urgent attention.

Indonesian epidemiologist and doctor Dicky Budiman of Queensland’s Griffith University has predicted an unthinkable 300,000 to 500,000 cases a day by August, arguing the restrictions on movement and gatherings imposed on Saturday on the islands of Java and Bali have come too late.

Jakarta is war-gaming for as many as 70,000 new infections a day, working out how to provide enough hospital beds, oxygen and drugs. It shapes as a mind-boggling assignment given how close health facilities have already come to collapse in the capital and elsewhere on the island of Java, which is half the size of New Zealand but home to 140 million people.

Australia has come to the aid of fellow neighbours Papua New Guinea, East Timor and Pacific nations like Fiji over the past four months, sending them hundreds of thousands of vaccines doses and other reinforcements such as planeloads of masks and shields and gowns.

Indonesia’s plight is on a far greater scale but aside from any other assistance, the Australian government could provide vaccines to Jakarta, which faces a momentous task to meet its goal of inoculating at least 181 million people across its 6000 occupied islands.

The federal government has donated $77 million to Jakarta to purchase shots through the COVAX facility, a sum Indonesia hopes it can use to buy 10 million doses.

A teenager reacts as she receives a shot of the Sinovac vaccine for COVID-19 in Bali this week. Indonesia has started vaccinating children aged 12 and above.Credit:AP

Australia has also committed $100 million to the Quad vaccine partnership, joining the United States, Japan and India in promising to help south-east Asia, as well as injecting $130 million into COVAX and pledging 20 million extra doses to the Indo-Pacific by mid-2022.

But it is immediate access to the vaccine rather than cash that is the most valuable commodity right now. Only 12 per cent of people in Indonesia have had at least one dose and just 5 per cent are fully vaccinated.

Japan last week shipped 1 million shots of AstraZeneca and have pledged another million, the US is promising 4 million doses of Moderna “as soon as possible” and the Netherlands has offered up 3 million doses, although the brand is unannounced.

While Australia has been tearing itself apart about what age groups should or shouldn’t be administered AstraZeneca, Indonesia could make use of whatever is leftover from the 50 million locally made doses.

Hundreds of thousands of doses might seem like a drop in the bucket considering the scale of the demand, but right now every jab counts. And will be remembered.

Indonesia has so far received 119 million shots of Sinovac, Sinopharm and AstraZeneca and Joko wants the speed at which they’re administered raised to 2 million per day by next month.

In the meantime, a catastrophe looms. Despite the warnings of a surge in the wake of the Muslim holidays in May, when as many as 1.5 million people defied a domestic travel ban and returned home, Indonesian officials didn’t anticipate the virus taking off the way it has.

Now they and everyone else can see what might be ahead and it’s frightening.