Follow
Home » World News » ‘Vertical firecracker’: Boris Johnson takes to the skies as contenders to replace him battle below

‘Vertical firecracker’: Boris Johnson takes to the skies as contenders to replace him battle below

London: Rishi Sunak cemented his place as frontrunner in the increasingly acrimonious battle to replace Boris Johnson as he and his old cabinet colleague Liz Truss pulled out of a final televised debate amid concerns their savage critiques of each other will harm the party at the next election. 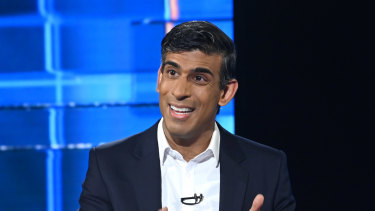 Rishi Sunak is poised to secure his place as one of the final two candidates to replace Boris Johnson as UK prime minister.Credit:Getty

Sunak increased his number of MPs’ votes to 115, five votes short of automatically qualifying through to make the final two. With Tugendhat’s 31 votes up for grabs, Sunak’s team will hope to pick up the remaining votes required to do so.

Mordaunt, the wildcard insurgent, lost a vote on the last ballot after a lacklustre performance in the debates. But she still leads her immediate rival Truss, 82 to 71.

“Penny is stalling and going backwards,” former Conservative Party leader Sir Iain Duncan Smith told the Herald and The Age. “Liz has the momentum to go all the way.”

Kemi Badenoch, the darling of the Brexiteer right, has performed strongly in all debates but has never been in cabinet and is expected to be the next MP to be knocked out. 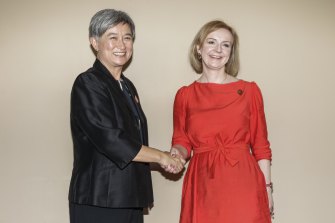 Foreign Minister Penny Wong with her UK counterpart and prime ministerial hopeful Liz Truss at the G20 in Indonesia.

However, her campaign continued to gain strength with 58 votes. This is likely because the last candidate to be knocked out, Suella Braverman, was also a Brexiteer from the right and had been vying for the same pool of votes as Badenoch.

But the long campaign to attract colleagues is taking a toll on the party. The bitter debates have seen candidates attack each other over trans rights, tax cuts and at times exposed rifts inside cabinet.

Sunak and Truss both pulled out of the final candidates’ debate amid fears the bitter infighting would make it difficult to govern together after the leadership is settled on September 5.

Sky, which was to host the debate, cancelled the program. MPs will vote again on Wednesday and finally on Thursday.

During Sunday’s debate, all candidates were asked to raise their hand if they would have Johnson in their cabinet. None, including Truss who has Johnson’s undeclared backing, raised their hand.

Meanwhile, Johnson released a video of him recently taking to the skies, commanding a RAF Typhoon jet at Farnborough.

The video showed him in the cockpit and raising his thumbs with a plane painted with the Union Jack in the background. He said he felt like a “vertical firecracker”.

“After three dynamic and exhilarating years in the cockpit we will find a new leader,” he later told parliament.

Over the weekend he hosted a party at the UK prime minister’s country home Chequers for loyal supporters.