It won’t dampen our spirits! Drinkers ignore stormy weather to enjoy their freedom on nights out with showers and thunderstorms set to continue today

Revellers in Leeds braved the heavy rain as Storm Evert battered parts of the UK last night, ahead of a showery weekend in most of the country with some thunderstorms.

Britain is expected to see some sunshine in the North and West today but there will be heavy rain in parts of East, Central and South England this afternoon.

The storm battered the South West with 75mph wind yesterday, seriously injuring two women under a tree and forcing festivals to delay their starts and move camps.

Meteorologists expect the heavy gales to die down by tomorrow, when it will feel a little warmer and start to dry out apart from in the South and South East of England where some will be thundery. 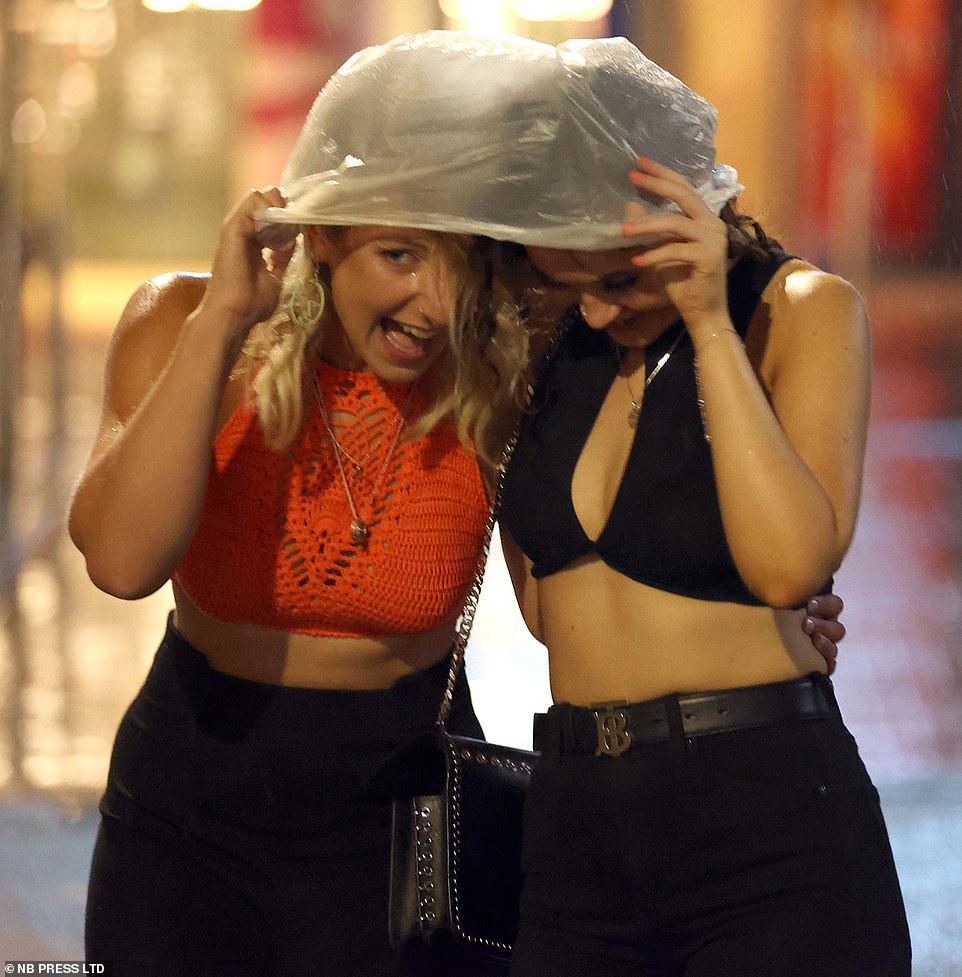 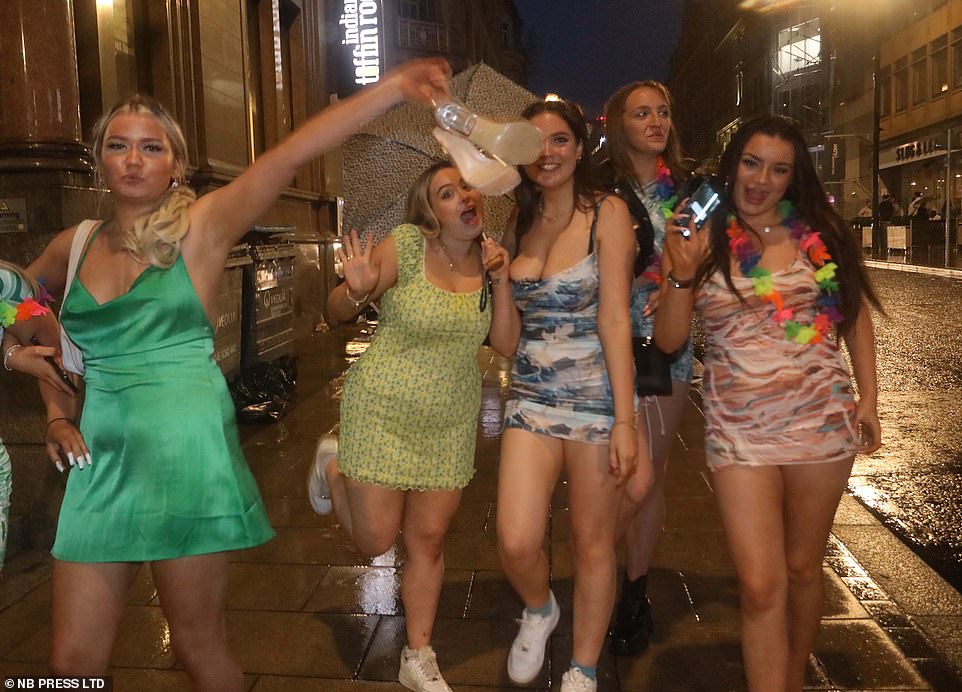 In Leeds, revellers headed out into the city centre to party for the start of the weekend in spite of the miserable summer weather 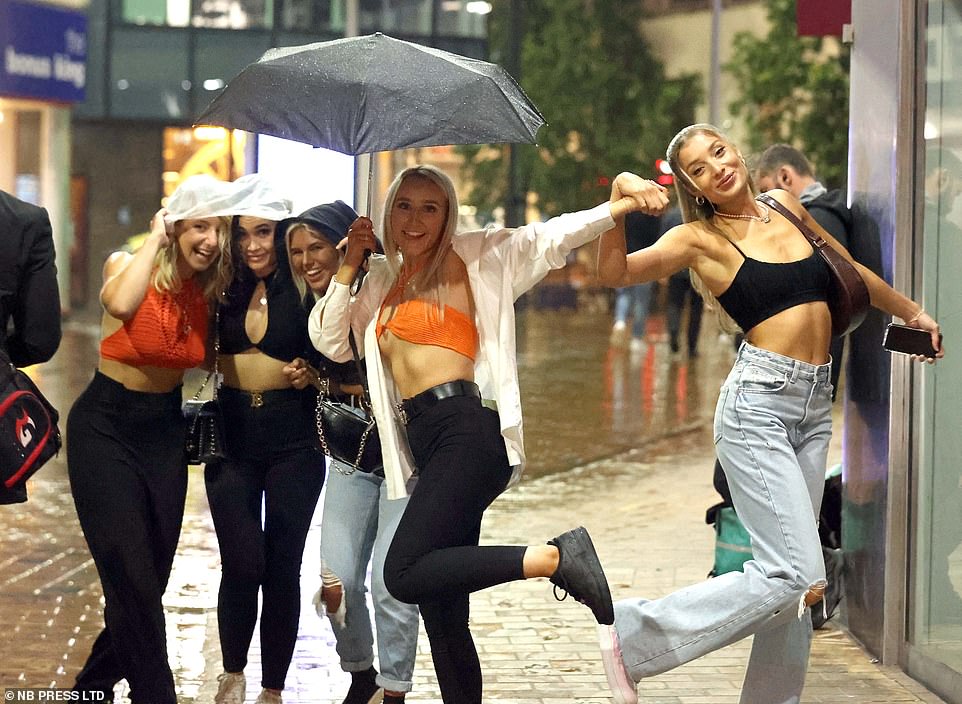 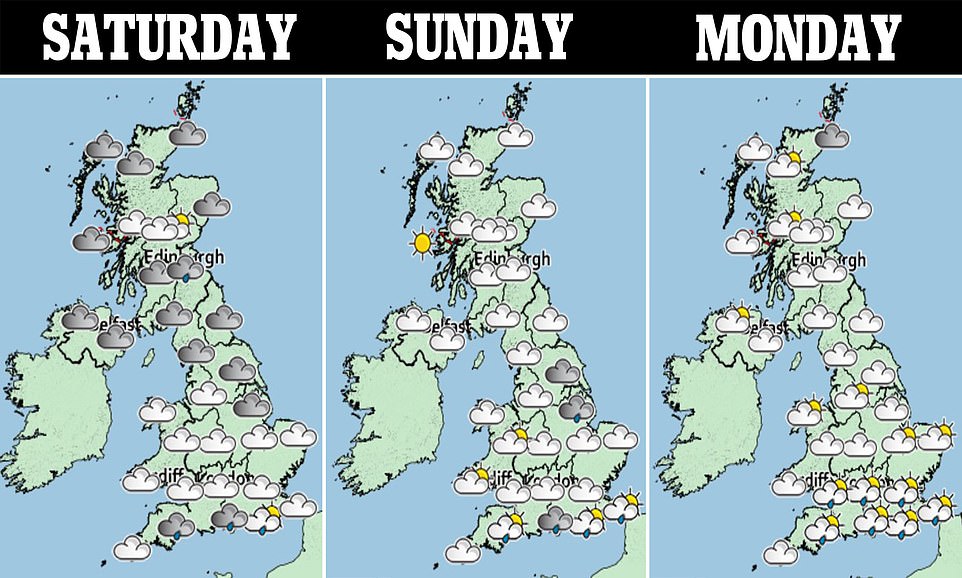 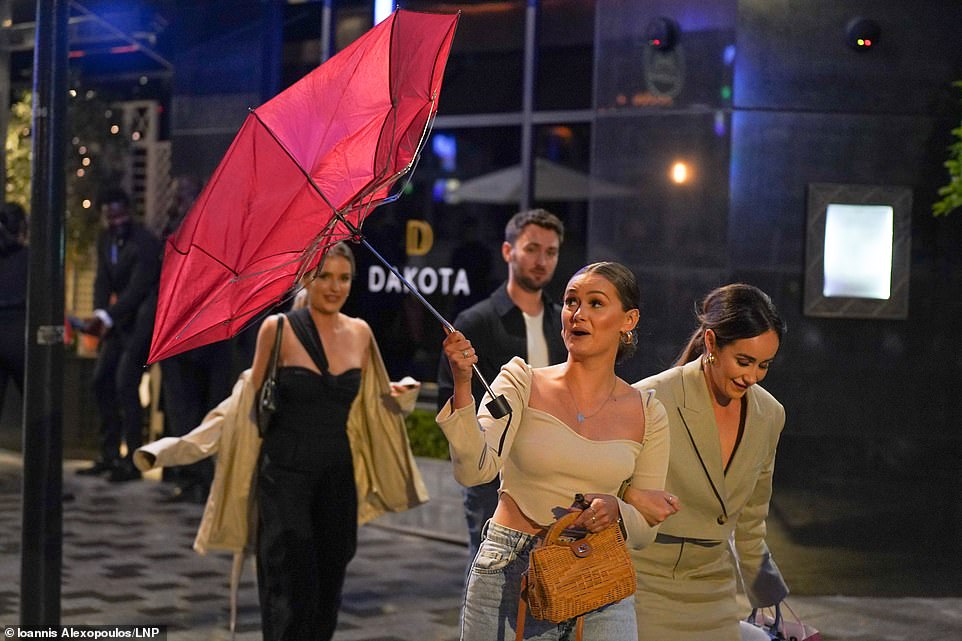 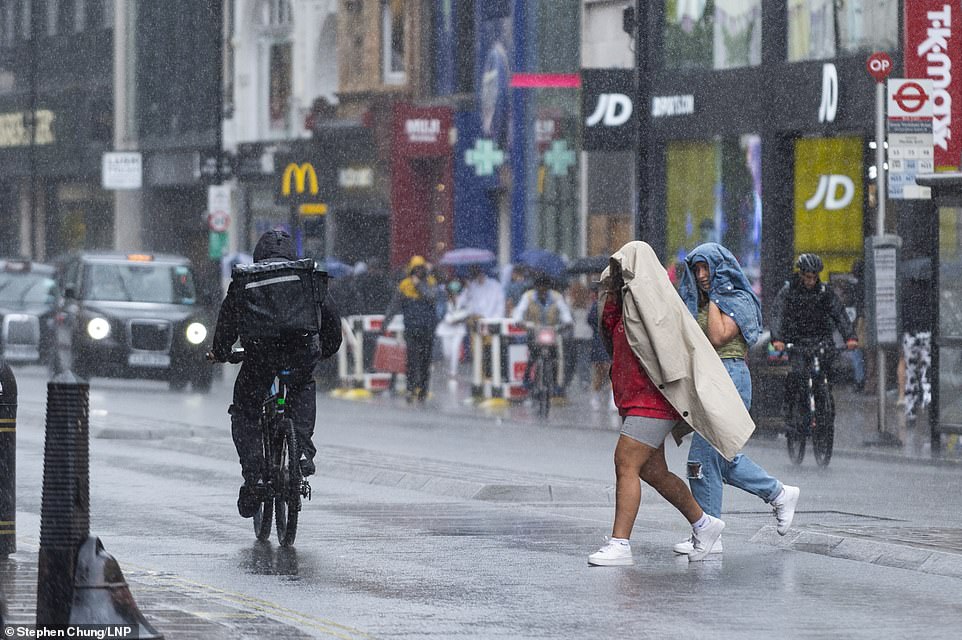 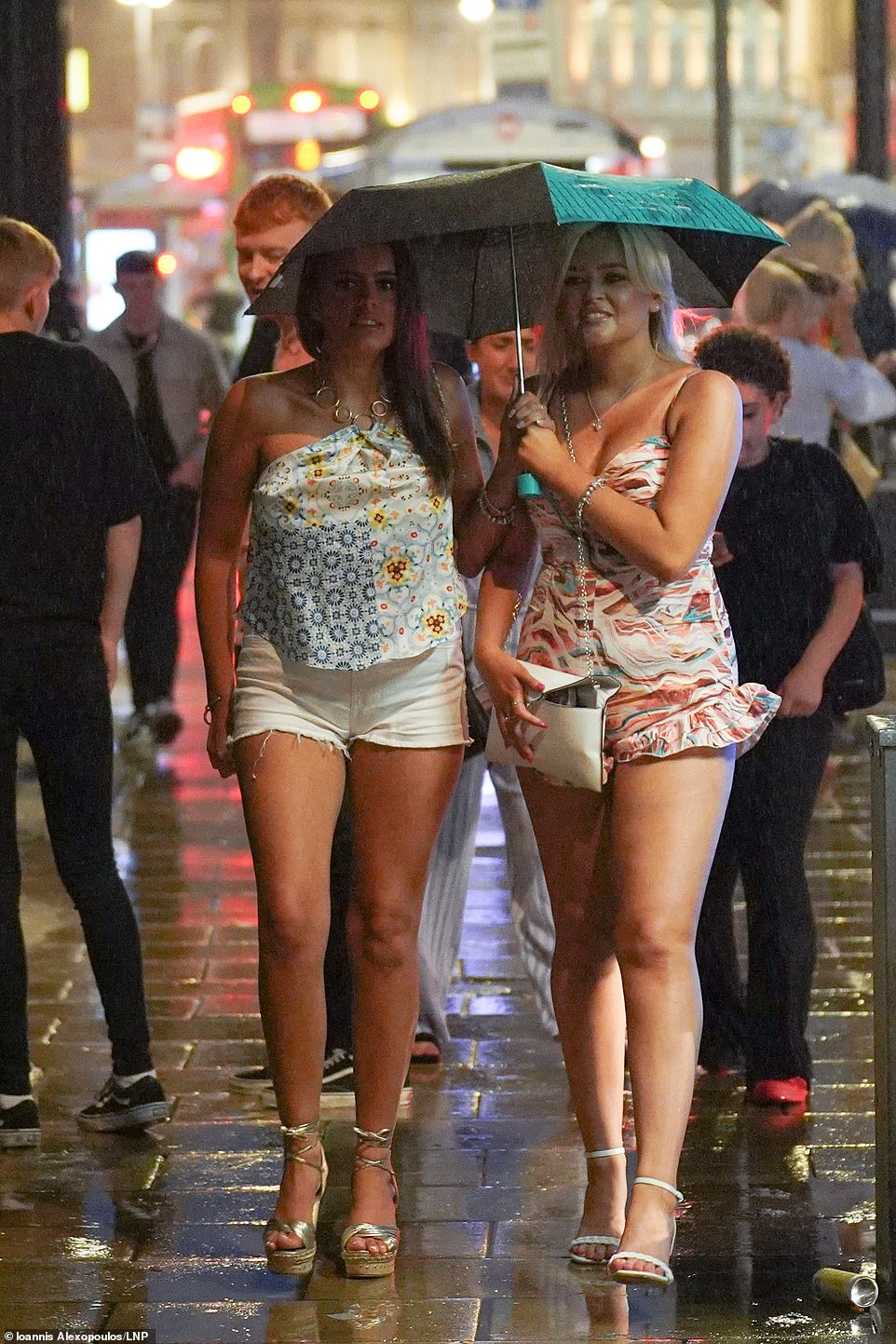 Some braved the conditions and headed out despite the rain and strong winds, armed only with an umbrella for a night out in Leeds

Next week, the weather will continue to be unsettled across England and Wales, with showers and some sunshine

The Met Office said: ‘The changeable conditions continue to dominate the picture for the first half of August. A mixture of sunny spells and showers, with some drier interludes, is the general pattern expected through this period for all.

‘Some of these showery spells may merge to give slightly longer spells of rain. At first, scattered showers for most, with some thunderstorms likely to develop from these. Torrential downpours are likely in some places.

‘Winds generally remaining breezy, with temperatures expected to be near to average, perhaps slightly above average in northern areas.

‘Through the remainder of this period, it will likely turn settled, though a few showers cannot be ruled out, especially in southeastern areas.

‘Drier weather than recently, with sunny spells for most through to mid-August, with temperatures trending above average.’

Tents and awnings collapsed at Camp Bestival in Dorset yesterday and organisers delayed opening the public arenas and gates.

Staycationers were warned to take extra care while camping and driving on coastal roads as the storm blew into the South West of the country, as it continued to gather pace and swept east along the south coast. 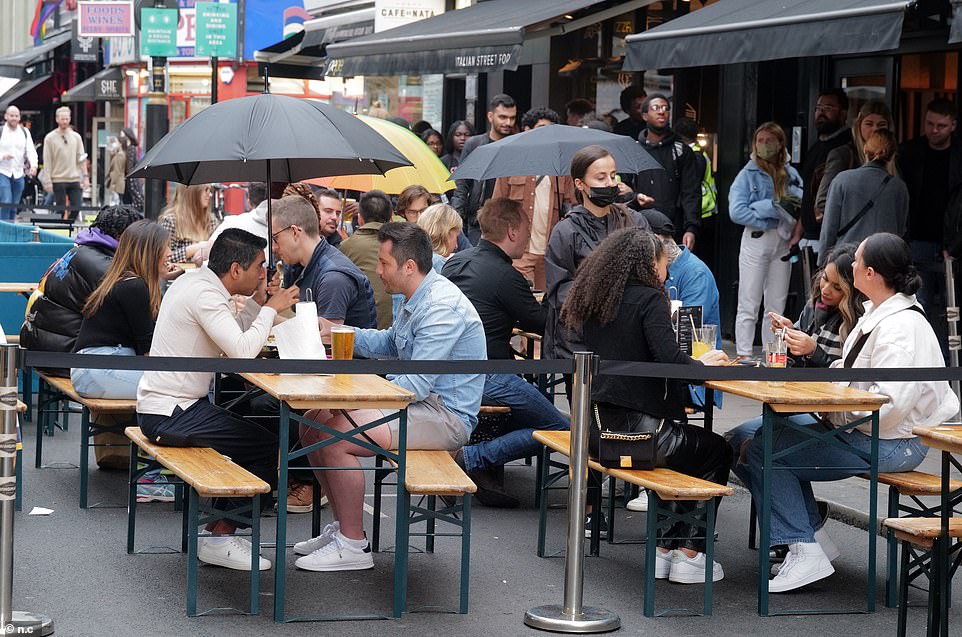 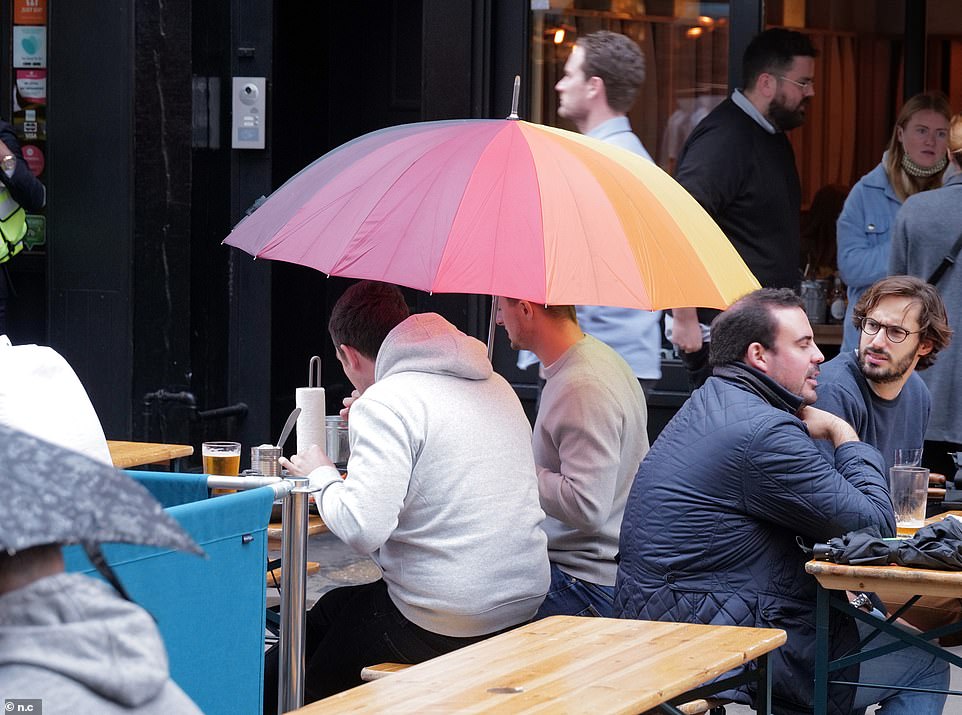 Despite the miserable conditions, many braved the rain to enjoy the start to their weekends in Soho as they headed to the pubs and bars armed with umbrellas 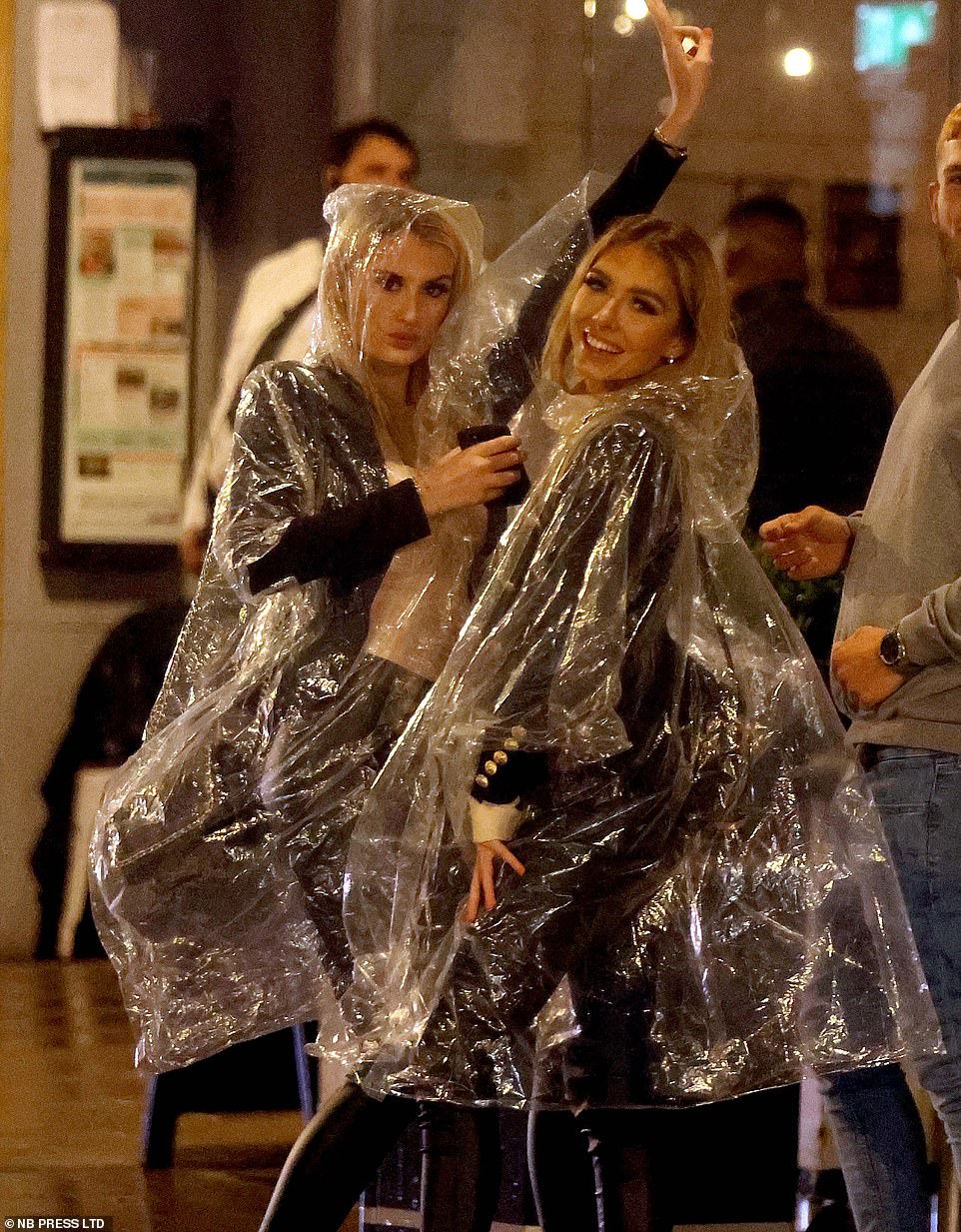 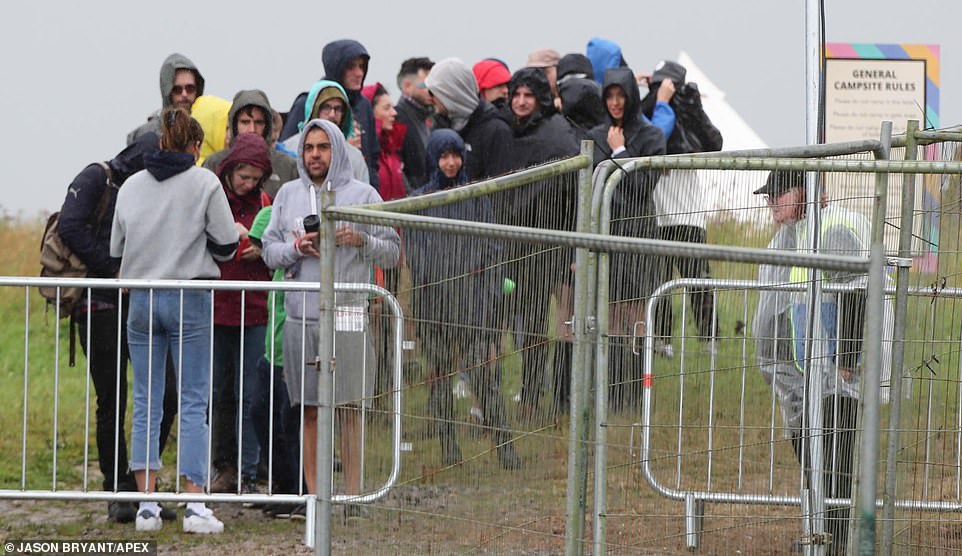 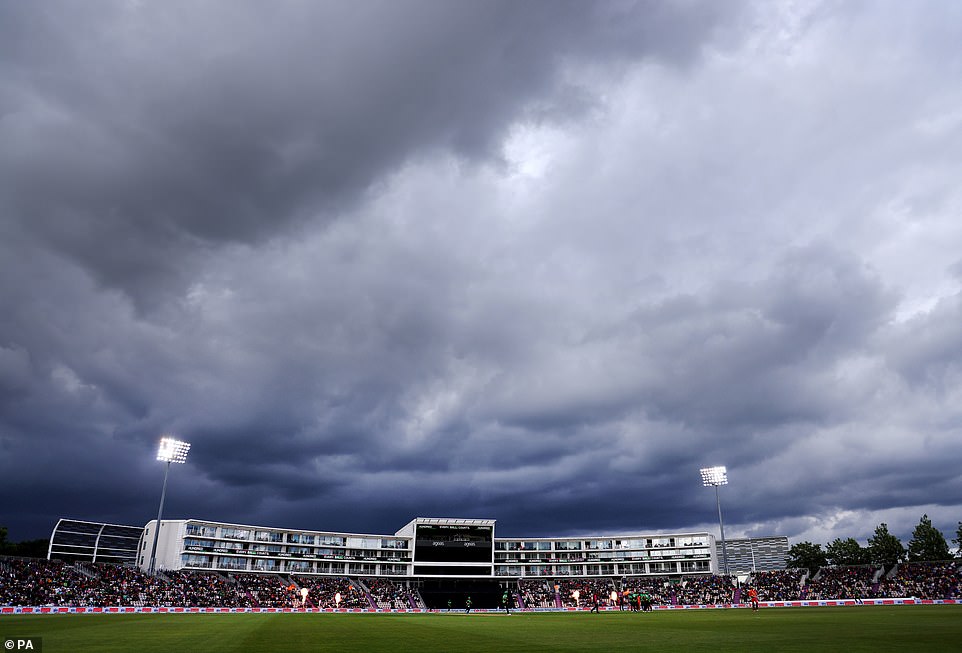 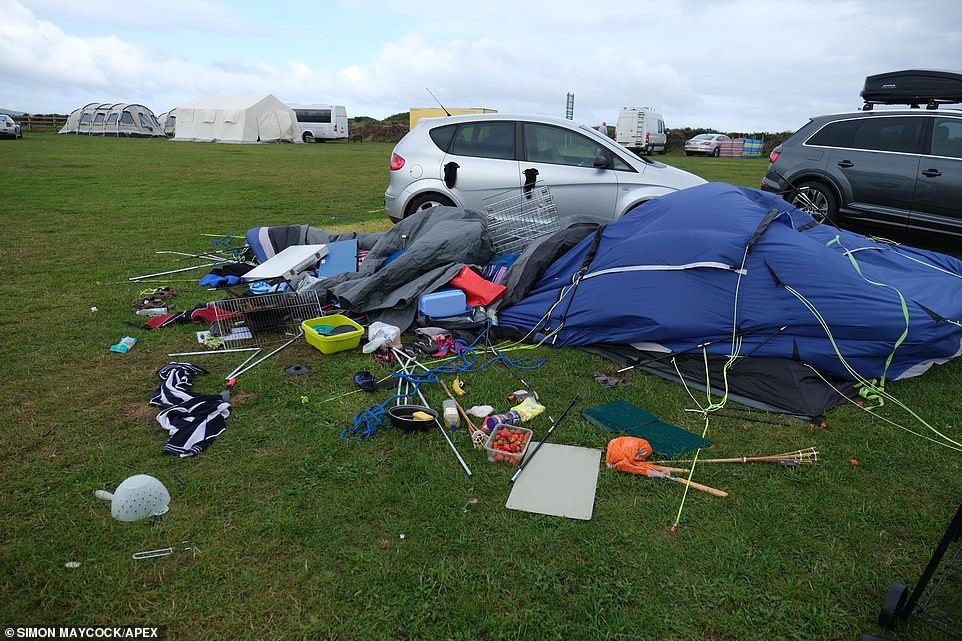 This tent in Cornwall failed to withstand the heavy winds, a fate shared  by many across the south of England last night 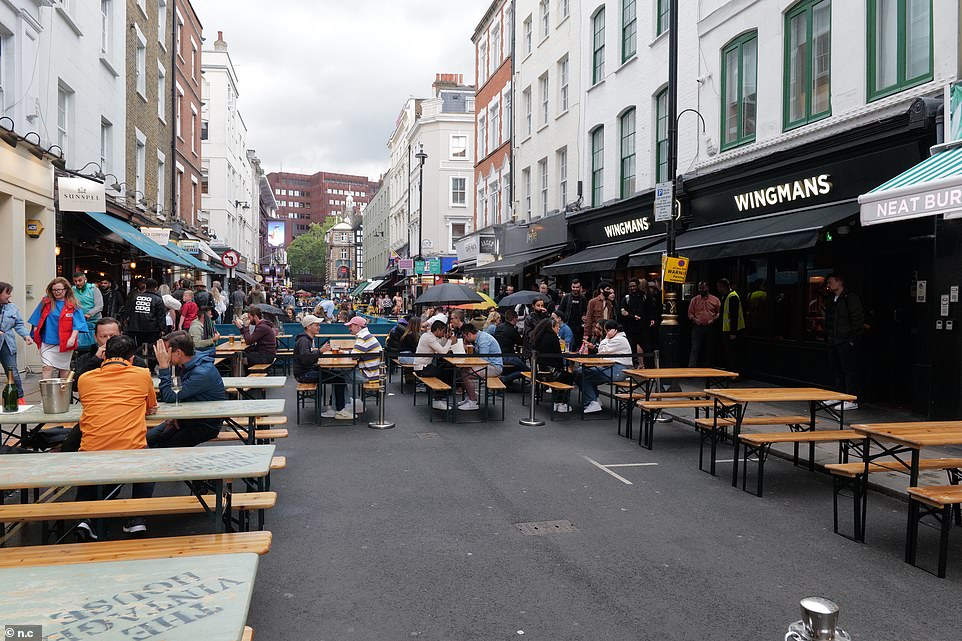 In Cornwall, guests at the Bedruthan Steps Campsite were moved to a field which is better protected from the wind, while Sarah Weeks from clifftop glamping site Seaview Tipis told guests to ‘pack up and go’ for their safety.

Meanwhile the three-day Rock Oyster Festival – where Sophie Ellis-Bexter is headlining tomorrow – is under threat and delayed opening on its site at Dinham House in St Minver, Cornwall, until midday today due to the storm.

Camp Bestival is still going ahead for the 30,000 attendees as it stands, with curator Rob da Bank saying: ‘We’ve been through everything and are ready for anything – our customers are very hardy – we’ll get through it.’

An amber ‘danger to life’ wind warning was issued ahead of ‘unseasonably strong winds and heavy rain’. The worst conditions were in Cornwall, where gusts of between 55mph and 75mph were hitting coastal areas.

Downpours added to the miserable conditions for the thousands of families on holiday in Britain at the moment.

But drinkers braved the rain for a night out on Friday, with many huddling under umbrellas and raincoats as they headed for shelter in pubs and clubs.

Forecasters warned of possible damage to buildings, fallen trees, power cuts and cancellations to rail, air and ferry services, as the storm brings a ‘wet and windy’ day today for the southern and central regions of the country.

Evert is the first named storm since Darcy in February. A Dutch boy’s name meaning ‘shepherd’, it was chosen by Holland’s KNMI forecasting service, which works with the Met Office to name storms in western Europe.