James Bond fantasist, 24, who plotted to launch a hand grenade at a police station after trying to purchase explosives from an undercover cop in Costa Coffee is jailed for nine years

A would-be bomber who tried to buy a hand grenade from an undercover detective and then claimed it was all part of his ‘James Bond fantasy’ was jailed for nine years.

Chowdhury harboured a hatred of police and trawled the internet looking for grenades he could purchase.

He unwittingly approached an undercover operative known as ‘Gary,’ on the social media app Signal last January asking him if he had any ‘merch’ to sell.

Under the username ‘Buyer,’ Chowdhury told Gary he wanted to buy three grenades for £900 – before arranging a rendezvous at Costa Coffee on Wanstead High Street.

Chowdhury was convicted of attempting to possess or control an explosive substance with intent to endanger life by an Old Bailey jury earlier this year.

Passing sentence as he jailed him for nine years, Judge Philip Katz told Chowdhury: ‘You intended to buy and believed you were buying a highly dangerous item.

‘On the day, you appear not only nervous, but excited. In those circumstances, I am sure your decision to buy the grenade was anything but impulsive.’ 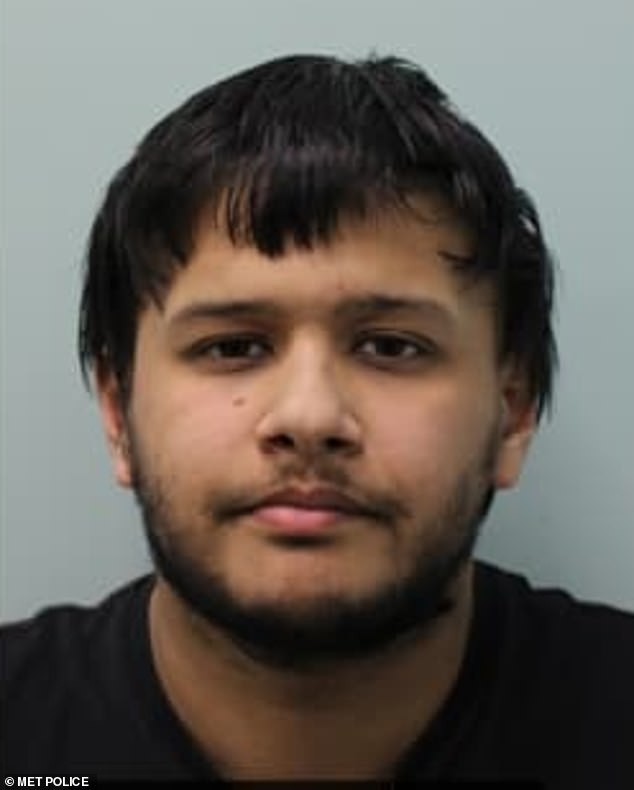 Mohammed Chowdhury, 24, was sentenced to nine years in prison at the Old Bailey today after trying to buy grenades from an undercover police officer

Alistair Richardson, prosecuting, said: ‘On 5 February last year, this defendant, Mohammed Chowdhury, tried to buy a hand grenade. He did so because he wanted to use it.

‘When he tried to buy that hand grenade, he was intending to use it to endanger lives, or cause serious damage to property.

‘The only reason he did not succeed in obtaining a hand grenade was, because unbeknownst to him, the person he was trying to buy it from was an undercover officer.

‘The defendant would have you believe that this was all part of a James Bond fantasy. Where is independent the evidence for that?

‘Instead what you have time and time again is an interest in weapons and explosives, evidence entirely in keeping with those notes on his phone.

‘Be it references to his interest in the velocity in grenades or be it the recitation of these events, endangering life or causing serious damage to property, during evidence.

‘You know that he is someone who is willing to lie, willing to deceive in an attempt to save his own skin.’

A jury convicted Chowdhury of attempting to possess or control an explosive substance with intent contrary of the Criminal Attempts Act.

He showed no emotion as the verdict was announced.

Chowdhury had admitted four counts of possessing material likely to be of use to a terrorist before the trial. 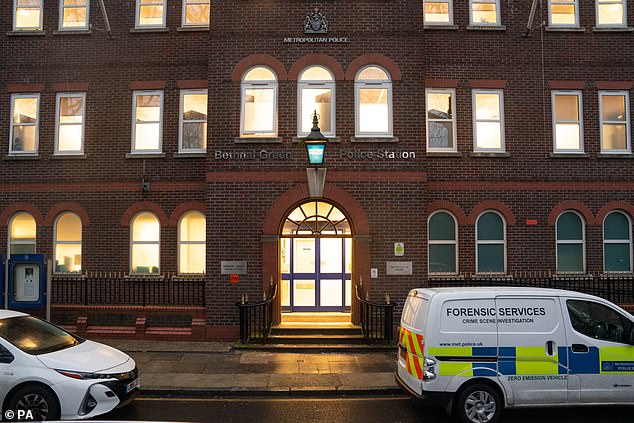 On February 5 the officer watched Chowdhury stroll into Costa before becoming ‘flustered’ when he introduced himself to set up the exchange, jurors heard.

After telling Gary he could only afford one grenade instead and needed to withdraw money first, Chowdhury arranged to meet him later in a retail park in Leyton.

When he approached the officer again outside B&Q, Chowdhury said he wanted the weapon ‘just to play around with it’ and throw it somewhere in his neighbourhood, the court heard.

‘Gary was seated in a corner of the shop behind the counter and made eye contact with the man who had just walked in and nodded, and the man joined him. As you know, the man was this defendant.

‘Gary asked to see the messages they had exchanged on the defendant’s mobile telephone and wanted him to confirm the platform he had used to communicate.

‘The defendant showed Gary the messages on his phone and confirmed that they had been communicating via Signal.

‘Gary recognised the messages as the ones between him and Buyer, and saw his Signal ID ‘Gz’ attached to the messages.

‘Mr Chowdhury seemed flustered to Gary. He had been going through his pockets trying to find his phone.

‘He then produced a money bag containing money. Gary could see a £20 banknote inside the bag. The defendant told Gary that he could only get £300.

‘He mentioned having a Starling account. He said he could not get any more money and only wanted one.

‘You will see from some of the evidence that the defendant had indeed tried to withdraw money from his bank account on 4 February before the meeting with Gary. It appears he also then tried again later, after this meeting in the coffee shop.

Detailing the alleged conversation between the pair in the retail park, Mr Richardson said: ‘The defendant said to Gary that he had never done anything like this before.

‘Gary confirmed that the defendant had the money. As a result, Gary then called another man and arranged for him to bring a grenade over from his car which was parked very close by and place it in his boot. D did this and then went back to his car.

‘This other man, known as ‘D’ was in fact another undercover police officer.

‘Gary directed him to the nearby parked car in which ‘D’ was waiting and told him to give ‘D’ the money.

‘Gary closed the boot and watched the defendant get into the other car with ‘D’.

‘Before he did this, the defendant had told Gary that he was going to throw the grenade in his yard, i.e. the area in which he lives and just play around with it.

‘Gary asked him if he knew how to handle a grenade and the defendant replied, “Yeah, take it and like 30 seconds and then you chuck it or something like that.”

‘Speaking about the grenade, Gary asked him, “You want the real thing, right?” the defendant replied, “Yeah.”

‘Gary made a recording of this meeting with the defendant in Leyton.’

Armed police swooped in to arrest Chowdhury as soon as he handed over a transparent bag of cash to ‘D’ inside his car, jurors heard.

‘He then handed ‘D’ a small transparent money bag containing banknotes. As ‘D’ took the cash out of the bag, the defendant told him the bag would be sweaty.

“D’ told the defendant that he would count the money and, as soon as that was done, he could go and collect the grenade. This money bag was later found to have a total of £300 in cash inside.

‘At this point, armed police intervened with weapons drawn to arrest the defendant.’

Chowdhury, of no fixed address, denied but was convicted of attempting to possess or control an explosive substance with intent contrary of the Criminal Attempts Act.

He was given an extended sentence totalling 14 years – meaning he will serve at least nine years in custody then serve a period of five years on licence.