Alex Rodriguez is taking a page from Jennifer Lopez’s handbook and hanging out with his ex? Oop, yep I went there (sorry, Bennifer). A-Rod and his ex-wife Cynthia Scurtis hung out during a workout on Saturday. Ofc, he shared snaps on his Instagram Story. If you hang out with your ex but don’t post about it, did you really hang out with your ex??

“Cynthia is a world class mommy to our girls … wrapping ice though?!?!?! LOL,” he joked alongside footage of Cynthia helping him ice his leg at the gym. In another photo, A-Rod smiles with his arm around Cynthia’s shoulders. 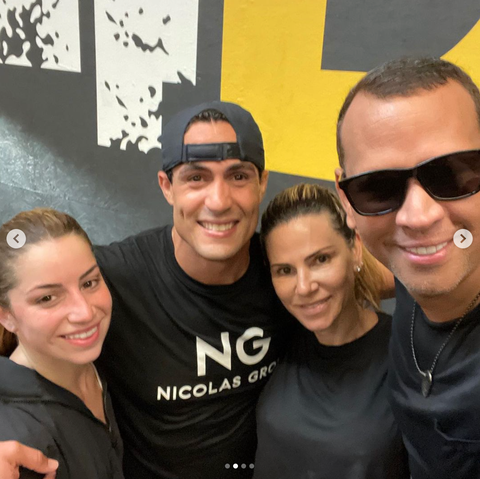 The former spouses tied the knot in 2002 and are parents to teenage daughters, Natasha and Ella. Cynthia filed for divorce in 2008 and it was finalized two months later. A-Rod since moved on and he and J.Lo were *this* close to getting married before their unexpected split in April.

They announced their decision to split in a joint statement to the Today show:

J.Lo is now dating her ex-fiancé, Ben Affleck (it’s so messy, we know). Apparently, A-Rod doesn’t care because when he was asked about Bennifer in a video posted by Page Six, he simply responded “Go Yankees.” LOL. Ben is a huge Boston Red Sox fan and to all the baseball newbies out there, they are big rivals.

So, what will happen next in the J.Lo/A-Rod/Ben/Cynthia (?) saga? We have zero freakin’ clue.

You love all the deets on celebs. So do we! Let’s overanalyze them together.

ALEX, e, Reunites, Rodriguez, With
You may also like:

A-Rod showed up at the same St. Tropez hotspots just hours after Bennifer