Who DO they think they are! An ageing media titan, his warring children fighting for the crown, a pitying public mea culpa over a national scandal – glitzy TV saga Succession returns

How do they get away with it? As the brutally funny family saga Succession returns for a third series, never has a TV drama so brazenly stuck two fingers up at the libel laws. Succession is an epic of internecine warfare between four siblings, fighting over the future of their octogenarian father’s media empire.

Creator Jesse Armstrong insists the characters and storylines are all fictional, with slivers of inspiration drawn from dynasties such as the Kennedys, the Gettys and even the Royal Family.

It’s no more real than Dallas, insists Armstrong. ‘This is a fictional family. There’s loads of Succession stories to draw on,’ he says.

But that’s not quite the whole truth. The parallels with the lives of Rupert Murdoch and his four eldest children — Prudence, Elisabeth, Lachlan and James — are as undeniable as they are numerous. 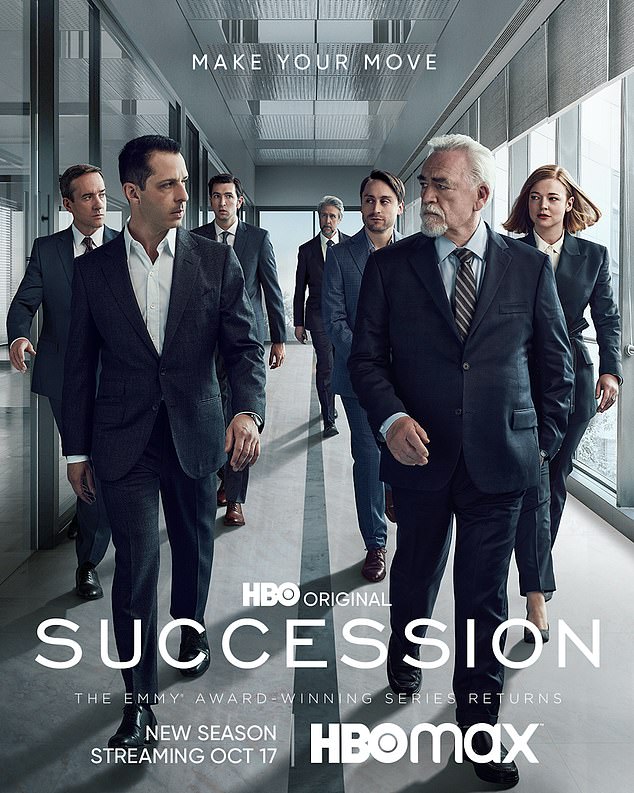 As the family saga Succession returns for a third series, never has a TV drama so brazenly stuck two fingers up at the libel laws. There are parallels with the life of Rupert Murdoch 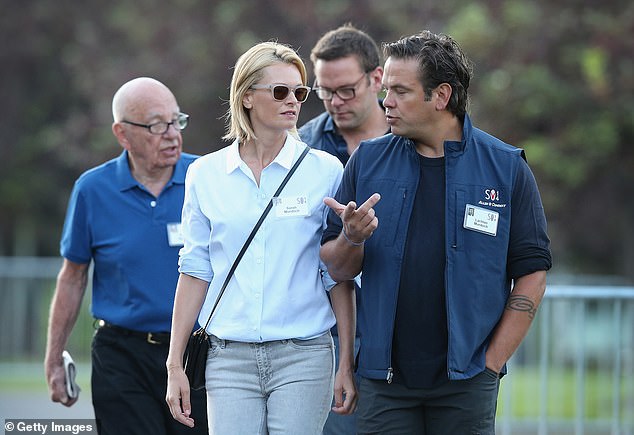 Real life: Parallels with the lives of Rupert Murdoch (left) and his four eldest children – Prudence, Elisabeth, Lachlan and James (second from right) – are undeniable

Many personalities, feuds and plotlines appear to be filched shamelessly from real life.

While Armstrong tries to deny it, the Murdochs don’t even bother. In an interview with the New Yorker magazine, younger son James couldn’t hide his contempt for the show: ‘I don’t watch Succession. Not even a peek. Why would I?’

And actor Brian Cox, who plays Succession’s bullying emperor Logan Roy, was buttonholed by a disgruntled viewer who warned that, though he enjoyed the show himself, his wife found it hard to watch.

Cox asked what the problem was. ‘My wife,’ retorted the stranger, ‘is Elisabeth Murdoch.’

It’s so obvious that, when BBC2 ran a documentary on the Murdochs last year, the theme music was almost identical — a sort of military march played on the piano by an 11-year-old with anger management problems.

To make it even stranger, Succession airs on Sky Atlantic. And who held the reins at Sky for nearly 30 years? The Murdochs.

Murdoch no longer controls Sky. Comcast purchased the 39 per cent stake held by his media behemoth Fox in 2018, beating a bid from Disney.

Clearly, Succession is not a Murdoch biography. If it were, the entire family would be facing jail for everything from drug trafficking to covering up rapes and murders… not to mention some outrageous sexual behaviour in a glass-walled skyscraper.

Here to help you untangle the facts from the fantasy are some of the more intriguing parallels between the show and the world’s most powerful media family. 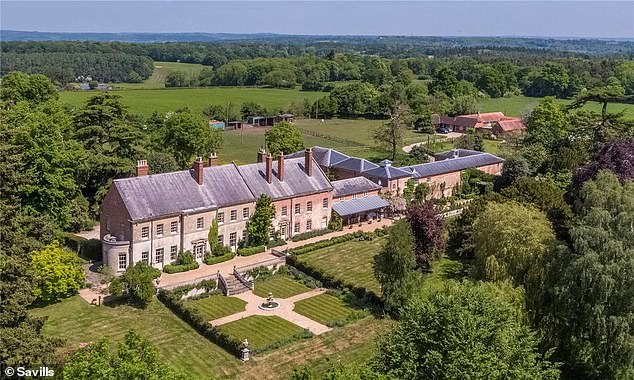 The Murdochs’ £30 million Cotswold mansion (pictured) in Great Tew, purchased last year, is also uncannily similar to the baronial stately home where the Roys stay when they’re in Britain 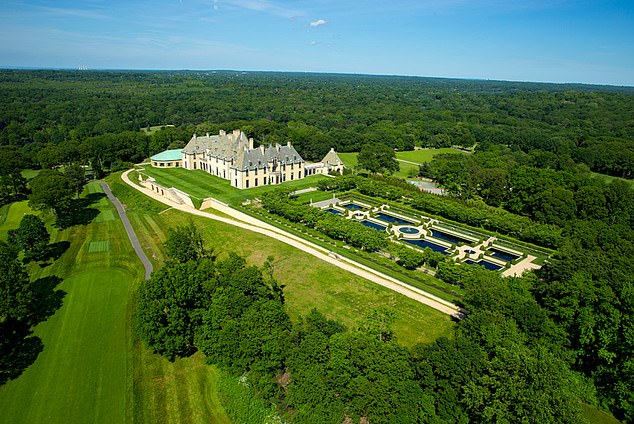 The Succession location scouting team reportedly chose the estate, built by financier Otto Hermann Kahn 100 years ago, early on in their scouting

Each episode of Succession is set in a different playground for the super-rich. In one, they’re on a private jet, heading for a billionaire’s conference called Argestes, which is modelled on Davos — the annual World Economic Forum in the Swiss ski resort.

It’s so overcrowded with mega-millionaires that they can’t find anywhere to land their plane. Naturally, the Murdochs are regulars at Davos.

Another memorable episode is set on Tom Wambsgans’ stag do at a sex-charged nightclub, while Logan Roy organises a sadistic business retreat at a castle in Hungary, where his lieutenants are goaded until they’re ready to tear each other limb from limb. These visions of excess are surely imaginary.

But there’s no doubting the reality of superyacht Solandge, where a key episode of Succession was filmed — 280ft long, with a swimming pool, cinema, health spa, marble bathrooms and chandeliered ballroom.

It also has a vast dining room open to the sea, where the Roy family gather while sailing the Mediterranean to pick a sacrificial scapegoat — someone to take the blame (and go to jail) for a cruise ship scandal.

The Murdochs have owned several yachts, including the 158ft Morning Glory, which was commissioned in 1993 to Rupert’s specifications.

It includes a marble fireplace, multiple dining rooms, a vast master suite, and a full bar. Morning Glory was later purchased by former Italian premier Silvio Berlusconi, who put it up for sale last year at $11million.

The Murdochs’ £30 million Cotswold mansion in Great Tew, purchased last year, is also uncannily similar to the baronial stately home where the Roys stay when they’re in Britain.

Rupert Murdoch and his wife Jerry Hall have applied for planning permission to replace their roof with a dome, echoing the Royal Pavilion in Brighton. Not even Logan Roy has thought of that.

IN THE FIRING LINE

The great scandal rumbling under the Roys — one that threatens to destroy their entire empire — is the cruise ship debacle. Waystar runs a fleet of ocean liners, where allegations of sexual abuse have been rife for years.

When Tom Wambsgans takes over, he realises rapes and even murders have been covered up, with passengers and staff paid to keep quiet.

There are no direct parallels with the Murdoch empire, of course. But in 2011 a scandal broke on an even greater scale — as it became clear that journalists at The News Of The World had been eavesdropping on private phone messages by hacking into their voicemails.

Countless public figures, including members of the Royal Family, were targeted.

The repercussions were colossal. The newspaper closed after it was found that News of the World reporters had hacked the phone of a missing girl, 13-year-old Milly Dowler, who was later discovered dead.

Called before MPs to answer questions about the scandal, Rupert Murdoch told them: ‘This is the most humble day of my life.’

The great scandal rumbling under the Roys (pictured) is the cruise ship debacle. Waystar runs a fleet of ocean liners, where allegations of sexual abuse have been rife for years

In 2011 it became clear journalists at The News Of The World were eavesdropping by hacking into voicemails. Pictured: James and Rupert before MPs after the phone-hacking scandal

The Roys grit their teeth through a similar Senate inquiry, where it is Kendall who has to make an abject apology — and where Logan declares: ‘That was the worst day of my life.’

There’s also a glaring overlap between the fictional Lester McClintock, former chief of Waystar cruises, and Roger Ailes, who headed Fox News for 20 years before resigning in a sex abuse scandal.

Ailes died in 2017, with numerous allegations hanging over his head, some dating back half a century.

McClintock’s predatory behaviour is such an open secret at Waystar that he’s known to everyone as ‘Mo’. Say it out loud… Mo-Lester. He used the cruise ships as his hunting grounds.

Fox News itself is satirised in Succession as ATN (the acronym is said to stand for American Television Network — a title as banal and generic as News Corporation).

Like Fox, the channel is ultra-conservative, stirring up racial division and pandering to the gun lobby. Roy executives have to push their way through crowds of anti-ATN protesters outside their offices so often that they no longer notice them.

One early plotline has Kendall urging his father to buy into internet news with the purchase of a start-up called Vaulter.

We’re never quite sure what Vaulter does — it seems to be a social media platform that shares news stories . . . but then, does anyone over 20 really know what’s so special about Triller, Rizzle, Likee and this year’s other online flashes-in-the-pan?

Kendall pays far over the odds for Vaulter, prompting one of Logan’s most brutal and humiliating put-downs to his son in a packed boardroom. ‘You bent over for them,’ he begins, and the rest is utterly unprintable.

In 1997, during the pre-broadband era, James Murdoch was eager for his father to buy the internet company Pointcast, which distributed news. News Corp made an initial bid of $450 million, before withdrawing the offer.

Two years later, Pointcast was sold… for $7 million. It evaporated into the ether a year later.

That wasn’t as humbling as the experience of Greg (Nicholas Braun), Logan’s nephew and the most junior of all the Roy family.

Everybody’s whipping boy, he is put to work at the Waystar theme park, wearing a cartoon animal suit.

Overheating and hungover, Greg throws up in the suit. If Succession proves anything, it is that growing up in a family of billionaires isn’t all fun.

-, Ageing, An, glitzy, media, titan
You may also like: