Follow
Home » Celebrities » Billie Eilish Reveals Friend Justin Bieber Has Been So Helpful As She Deals With Fame: We Go Through The Same Stuff

Billie Eilish Reveals Friend Justin Bieber Has Been So Helpful As She Deals With Fame: We Go Through The Same Stuff

Billie Eilish revealed that her mentor and ‘good friend’ Justin Bieber makes her feel ‘heard’ as she navigates the daily struggles of fame.

Billie Eilish, 19, is so grateful to have Justin Bieber, 27, as a confidante. The “everything I wanted” singer opened up about their close friendship, admitting that the Canadian pop star — who also became famous as a teenager — has helped her as she navigates with fame and success at a young age. “I love him…He’s a good friend of mine. He has been so helpful for me, in terms of just, like, dealing with fame,” Bille confessed on Sirius XM’sThe Morning Mash Up with hosts Nicole Ryan, Ryan Sampson and Stanley T on Friday, July 30.

Notably, Billie had her major breakthrough at just 16 with the track “bad guy” in 2019, while Justin rose to fame with “Baby” at just 13 back in 2010. “He’ll call me sometimes and just say stuff that makes me just feel heard and like there’s somebody else that goes through the same stuff. So it’s really nice to have him,” Billie added, also teasing that he’s the “sweetest baby ever” when pressed about a potential musical collaboration. While the pair don’t have any songs together yet, Billie certainly didn’t shut the idea down! 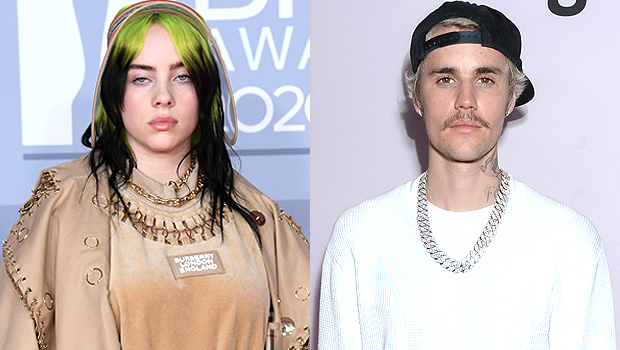 The love between Billie and Justin is mutual, as the Changes crooner has previously spoken out about being “protective” of the 19 year old. “Let her do her thing and if she ever needs me, I’m gonna be here for her,” Justin said to Zane Lowe on Apple’s Beats 1. “But yeah, just protecting the moment because people take for granted encounters,” he explained before getting emotional. “So, yeah, I just want to protect her…I don’t want her to lose it. I don’t want her to go through anything I went through. I don’t wish that upon anybody. If she ever needs me I’m just a call away,” Justin added through tears.

It’s so sweet to see the close bond these two developed after meeting at Coachella back in 2019! At the time, a then 16-year-old Billie was over the moon to meet her idol, whom she was a long time fan of. “Long and bright future ahead for you,” Justin wrote over an Instagram story post at the time.