The former ‘Gossip Girl’ star makes use of social media to unveil a sweet picture of her and her late father, one week after he passed away at the age of 74.

AceShowbiz –Blake Lively is still mourning the loss of her father. One week after Ernie Lively died from cardiac complications, the former “Gossip Girl” star took to social media to offer a heartfelt tribute to him.

Making use of Instagram Story on Thursday, June 10, the 33-year-old actress unveiled a sweet picture of her and her father. The snap saw her leaning her head to her dad’s shoulder as he kissed her forehead. She simply put out one brown heart emoji above the photo.

Also honoring the “The Sisterhood of the Traveling Pants” actor was his son-in-law, Ryan Reynolds. Turning to his own Instagram Story, Ryan shared the identical picture. 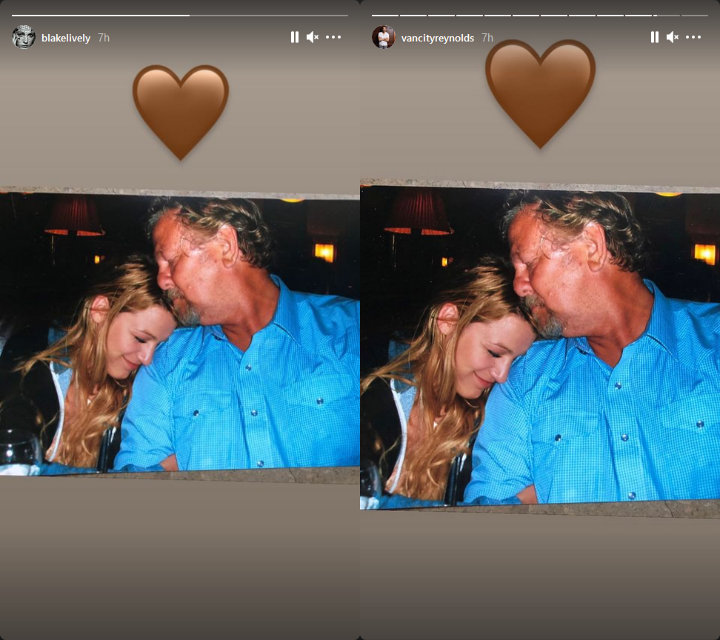 Ernie died on Thursday, June 3 at the age of 74. According to The Hollywood Reporter, he was surrounded by his wife of 42 years Elaine Lively and their five children, including, 54-year-old Lori Lively, 53-year-old Jason Lively, 49-year-old Robyn Lively, 39-year-old Eric Lively and Blake.

Ernie, who was born on January 29, 1947 in Baltimore, Maryland, wed Elaine in 1979. They share two kids together, Blake and Eric. He, however, adopted his wife’s three children Lori, Robyn and Jason from her previous marriage.

Ernie worked as an actor for five decades in Hollywood, dating back to 1975’s “The Waltons”. His other TV show credits included “McCloud”, “The Dukes of Hazzard“, “Falcon Crest”, “Hangin’ With Mr. Cooper”, “The X-Files“, “Murder, She Wrote”, “The West Wing” as well as “That ’70s Show“.

Ernie previously suffered a heart attack in 2003. In 2013, he underwent heart surgery and was treated with stem-cell therapy as part of an experimental retrograde gene procedure.

blake lively, father, honor, late
You may also like: